La Grande Orange Cafe: All Aboard for Brunch in the 'Dena 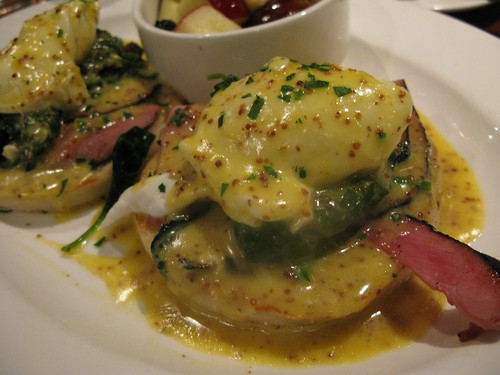 I love brunch soo much that I could have it for every meal of the day. That’s why I was more than delighted when the PR girls representing La Grande Orange Cafe in Pasadena invited me as well as other food bloggers — Lindsay of LAist, estarLA, Shop Eat Sleep and “Harlow Quinn” of Eater LA — to a media dinner that showcased the restaurant’s brunch fare. Brinner, if you will. 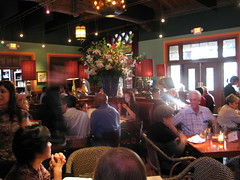 in the ‘Dena. Apparently this former Santa Fe Depot, built in 1935, used to be the hub before there was even a Union Station. Now the building houses an airy dining room, kitchen, bar and outdoor patio.

We walked in and were directed to a large table in front of the kitchen. The lighting was warm and low as if the room was lit by candles. The crowd enjoying their dinner seemed mostly comprised of an older, affluent-looking set. Kinda odd if only for the fact that the music playing over the sound system was stuff like Beck. Two turntables and a microphone.

As soon as we got settled, our waiter took our drink order. Hmm, what to get?

Mimosa, Bellini, Bloody Mary, white sangria or coffee? estarLA and I immediately ordered an Irish coffee, the perfect brinner cocktail. It showed up accompanied by a little bowl of whip cream. The cocktail was so deelish, c****reamy, potent. estarLA and I giggled, amazed by its immediate effect. Next up was the white sangria. This was light but equally potent.

Finally we got around to ordering food. We were offered the following selection from Executive Chef Jorge Gomez’s brunch menu:

Apparently some of these dishes will show up on the breakfast menu of the new La Grande Orange, purported to also be a pizzeria, in Santa Monica which opens today at 5pm and debuts its breakfast tomorrow at 6:30am. The prices seem to be cheaper at the SaMo location, i.e. the Commuter Sandwich is $6.25, the Daybreaker $7.25.

I had ordered the Eggs Benedict. Twas OK. I 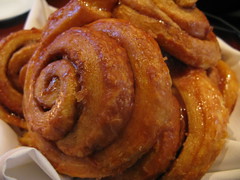 wasn’t all that crazy about that mustard hollandaise which made the dish kinda tangy. However, I had some of estarLA’s lemon ricotta hotcakes and was immediately jealous. These were so fluffy and awesome. I would have stolen more off her plate if I hadn’t already filled up on the homemade cinnamon buns and sinfully delicious deviled eggs* that had arrived earlier with my coffee.

The rest of the meal went the same way with me forcing myself to try a bit of this and that. I was soo full! I know. Wah. But it was torture being presented with one scrumptious-looking dish after another and being unable to even manage a spoonful.

The kicker was at the end of the meal when all of a sudden a smorgasbord of desserts descended on our table. Red velvet cake, key lime pie, blueberry-boysenberry pie, a make-your-own sundae, cucumber lime and mint sorbet times two so that both ends of the table could have access to everything! 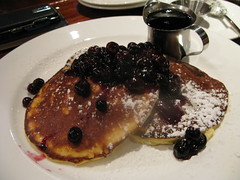 se frosting, I found it moist and sweet. Fortunately since no one else could manage to finish this, I greedily asked if I could box it to go. (FYI, it was still delicious when I had it the next day.) As for everything else, the ice cream, made by Carmela, were the highlight of the dishes even if they were only dessert sides. That cucumber ice cream was refreshing and soothing; the lavender ice cream that accompanied the blueberry-boysenberry pie was rich and creamy perfection.

Sure, I didn’t have room for any dessert but ordered up another Irish coffee. Helps settle the stomach. Yummy!

I would LOVE to come back here for brunch. A perfect way to spend a leisurely Sunday via the Gold Line, with a stop off at Chinatown and Not a Cornfield. And this time I’d have my own lemon ricotta stack.