Carnival Cruise: If I Could Turn Back Time 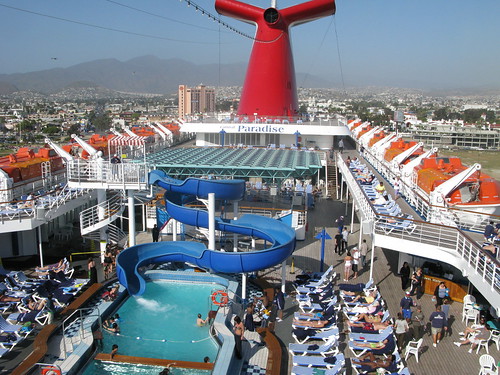 I used to think cruise ships were for old folks. My parents are always going on them. And remember An Affair to Remember? The Love Boat? Cruising was big back in the day, not so much now.

But then one of my bro’s friends wanted to celebrate his 50th birthday on a cruise to Ensenada. Since the party organizer, Walt Hawkins, is also a travel agent, he took care of everything, booking our party of 40+ on a Carnival Paradise weekend cruise.

Each person paid about $400 and since we had booked our tickets wayyy in advance last year, we were rewarded with a cabin upgrade and a $50 credit! Right now there’s actually a summer special going on through August 31 with this same deal. Go on a Bahama cruise for $279 or a Baja one for $299, both with cash back. 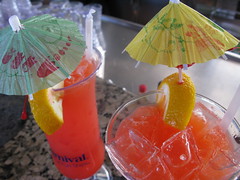 It’s a bargain considering the accommodations for three nights, all the food you can eat (more on that later) and even shows! Plus you’re on the ocean which wasn’t as sickening as I thought.

So the only things you really pay for are extras like cocktails, espresso drinks and exercise classes in the gym. But you can get your breakfast and lunch in this cafeteria-type setting which has a buffet station, a salad bar, drink fountain and even a 24/7 soft serve ice cream dispenser. It’s almost like a Vegas buffet.

For dinner, everyone meets up at preassigned dining rooms where you’re waited on and presented with a three-course menu which differs every night. There’s no check at the end of the night or tip to leave. You can take care of gratuity at the end of your cruise by handing it to the maitre d’ on your last night of dinner.

The food itself was mediocre, sounding better than it tasted. At first I was afraid of eating on the cruise after hearing all those horror stories of people getting food poisoning. But I think if you just make sure to eat 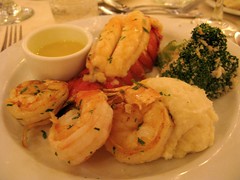 during the popular times when food is always replenished, you’ll be fine. But yeah, for dinner we had items like flat iron steak and lobster with shrimp and both were all right. For sure, it’s not a foodie’s paradise. But at least there was some variety for that initial “Oooh!”

For nightlife there were about four bars, a casino and even a dance club. And although the cocktails are priced low ($7-$9) by L.A. standards that can add up during the course of a drink-intensive weekend. Fortunately, my friends and I had planned ahead. Let’s just say our Crest mouthwash, water bottles and Arizona Iced Tea saved us a bunch of money. Also we got a soda fountain card for the entire weekend for $23 which got us unlimited sodas and juices. This is probably best shared with a friend cuz who drinks that much soda?

Now, I didn’t play shuffleboard or take advantage of the pool, but I did make use of the gym which had some nice weight machines and about six or seven treadmills. Unfortunately the treadmills are located at the front of the ship facing out so it was kind of unsettling running while the ground felt like it was bouncing up and down. And word to the wise, don’t look out at the horizon too long while you’re running. Erp.

If you’d rather run outside, there’s also an Olympic-size track located at the top deck of the ship, again, near the front where the mini 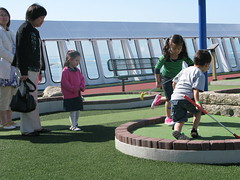 golf course is. But it has that nice springy tarmac that feels good under your feet. However, most times the track was occupied by groups of older women speedwalking and chatting.

For entertainment, I only saw one show and, yeah, it was pretty cheesy but at least it was something to do. This ode to Hollywood featured music from favorite movies and even Broadway musicals. They redid Roxy and Velma’s performance at the end of Chicago the movie and performed a weird hybrid of The Wiz and The Wizard of Oz.

I don’t know how many times I rolled my eyes but at the same time I had to admire the performers’ ability to kick ball change on stage while the ship was bouncing. I felt bad that the audience seemed to be sleeping, though, as was evident by the small smattering of applause after each performance.

But the highlight of the trip for me was hands-down the performance by Cher impersonator, Chad Michaels. Unfortunately this isn’t a regular show on the ship but rather a special treat for those in our party. The birthday boy is a huge Cher fan so the party organizer was able to book Alterna-Cher for a special performance. So this Cher performed for us in the Leonardo Lounge where we 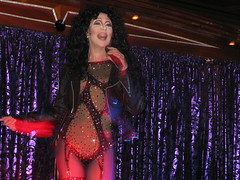 also enjoyed an open bar and a table of appetizers. Damn that was sooo fun!

FYI, you can catch Chad as Cher at Rage in West Hollywood on Tuesday nights where he performs in the Dreamgirls Revue along with other celebrity drag impersonators.

I know being confined to a cruise ship isn’t a lot of people’s idea of fun. It definitely wasn’t for me at first but in the end I really enjoyed it. My favorite day of the weekend was actually the “Fun Day at Sea” where we spent the whole Sunday on the ocean.

While everyone else gathered around the pool, the most popular gathering area of the ship, I found a quiet little section of the deck at the rear of the ship where I lounged undisturbed and stared out at the sea. A ladybug landed on my leg while I enjoyed the warmth of the sun’s rays. Aah.

For those who suffer cabin fever, you can book an onshore excursion at your port of call. They had activities like wine tasting, ATV riding, cooking classes and kayaking, which range in price from $19 to $125. My group, however, was more interested in hanging out at Papas & Beer all day for some raucous, beery “fun” so instead I just spent a couple hours shopping and returned to the ship. Picked up some nice tequila and a lovely handmade shawl.

In any case, I probably wouldn’t do the Mexican cruises again but I’d be all for checking out the Hawaiian or Alaskan cruises. Only with a group of friends, though. I can’t imagine doing this with just one person (bf or bff). It was just cool having a variety of people to hang out with.