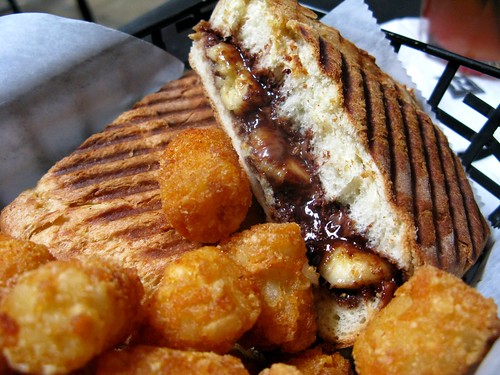 You had an awesome night of barhopping but one cocktail too many, you mixed your spirits and you didn’t even drink a drop of water before you went to bed. Next morning? Raging headache, and the last thing you want to have for brunch is some buttery pancakes drenched in sweet syrup. Blech! 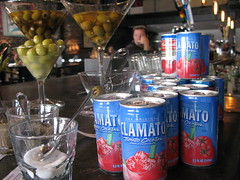 My bf and I checked out the brunch even though we weren’t really hungover. But by the end of it? We were kinda buzzed.

However, since I’m not big into Blood Marys I just had to order the

Caribbean Rush cocktail made of Myers Dark, pineapple juice, ginger ale and grenadine and found it as potent as a Mai Tai. Yikes! For a food pairing, I’m thinking this would probably be really tasty with the benedict sandwich of hot coppa, fried egg, 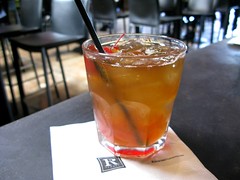 Since we were looking for something a little lighter to drink that wasn’t beer, the bartender hooked us up with a no name cocktail of Sauvignon Blanc, gin and St. Germain. Subtly fruity and floral, I think it would go well with the tuna melt deluxe sandwich.

If, however, you want something stronger than the usual brunch cocktail fare, the regular specialty cocktail menu is also available. I recommend the Bourbon Rose but make sure that they go heavy on the bourbon and easy on the pomegranate syrup. The last time I had it during a happy hour, it was soo nasty I could barely finish it. But this time the bartender fixed it up just right. It’s the heavier bourbon pour, I’m telling you. Even my bf liked it despite its girly-sounding name. 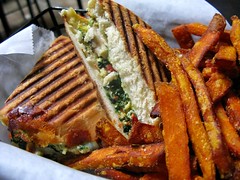 As for the panini sandwiches, we had the breakfast (scrambled eggs, bacon, andouille sausage, jack and cheddar) and California (scrambled eggs, spinach, sundried tomatoes, shitake mushrooms and Swiss cheese) sandwiches and found that the thick bread pretty much dominated the sandwiches. I would have preferred a thinner-sliced bread. And even though the breakfast panini has andouille sausage it wasn’t as flavorful or spicy as I had hoped. But fortunately several dashes of tabasco sauce fixed that right up.

For those with a sweet tooth, you’ll be happy to know that the one sweet item on the menu is the Nutella and banana panini which just debuted last weekend. You really can’t go wrong with that combination. 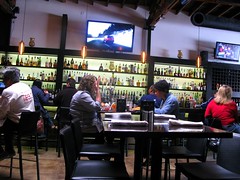 What’s pretty cool about the brunch menu is that most everything is under $10! And that includes the cocktails and beer. The only $10-plus items are the $11 glass of Russian River Ranches, Davis Bynum Pinot Noir and the $12 Lindemans Lambic Frambois.

What I also liked about brunch here, besides the crunchy tater tots mmmm! or the fact that it wasn’t Saddle Ranch packed, is that not only are there TV screens hanging over the bar so you can watch a game but the music playing in the restaurant is thoughtfully played at a low volume. They played a nice selection of Vampire Weekend, MGMT and Radiohead. Aah, nice and soothing.