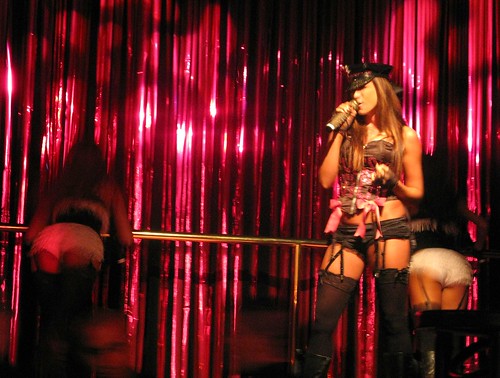 Before this trip, this was my idea of nightlife in Vegas: packed meat market bars, bad drinks, and drunk men trying to rub their junk on even drunker girls. Fortunately this hosted vacay courtesy of Caesars Palace showed me another side to those sparkly lights that I’ve only seen in movies and the pages of Us Weekly.

Cher at the Colosseum
After our dinner at Rao’s we rushed over to the Colosseum to catch Cher. It was all so surreal and yet so Vegas, made all the more perfect with the promise of Bob Mackey costumes. Most of the giddy audience was already seated when we arrived. The venue looked sold out. Luckily for us, our seats were in front orchestra 4 putting us a mere 12 (?) rows away from the lady herself. Tickets in this section normally cost $227.27!

Apparently you can do a dinner and show package which can be a deal if you choose wisely. For instance, you can do the higher priced show ticket ($190) and dinner at the Bradley Ogden lounge ($40) where you can enjoy the best burger ever and only pay a bit more than if you just bought a ticket to the show. Believe me, that house-ground steak burger is awesome.

{.imagelink}Back to the Cher show, honestly I was never a fan of hers until I saw the show. I only know a couple of her solo songs; um, “Believe” and “If I Could Turn Back Time.” OK, I’m still not a fan but I do appreciate her more now.

She’s fabulous and in the moments between songs she spoke to the audience displaying a very charming and down-to-earth side. But even when she was mere feet from us, I couldn’t believe it. That’s Cher up there telling us how she was terrified sailing above the audience on this flying stage in the opening number. She giggled, cracked jokes and made it like we were all great friends. And OMG she’s 63! Still looks pretty good.

She sang a lot of covers, i.e. opening with U2’s “I Still Haven’t Found What I’m Looking For,” but also did some Sonny & Cher songs, even performing a duet of “The Beat Goes On” with a recording of Sonny. I gotta get that song on iTunes. There were a lot of old clips from the old TV show and I guess home videos during those S&C years that rounded it out for any die-hard Cher fan.

And of course there was a whole heck of a lot of costume and wig changes which paid off in elaborate over-the-top outfits. (FYI Cher’s real hair is long, straight and black like during her S&C days.) Fortunately there were also some Cirque de Soleil type performers and aerialists to entertain us while we waited for Cher to show up in a new costume.

By the end of the show, I was, ahem, singing along to the songs in the finale. The big bang was signaled with big silver disks of confetti falling from the sky. I snatched up several for souvenirs. Heh. Cher confetti!

This was actually my first Vegas show ever and I don’t know why it took so long for me to go to one. It was fabulous!

If Cher isn’t your thing you may be interested in the other shows at the Colosseum: Elton John, Bette Midler and Jerry Seinfeld. I highly recommend it for a genuine Vegas experience.

The Pussycat Dolls at Pure
If you’ve been reading this blog for awhile, you know that I am not big into the nightclub scene. Give me a low-key lounge with fab cocktails any day but no thanks 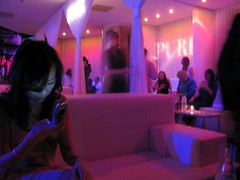 to club kids and crowded dance floors. But I have to admit I was curious what the VIP treatment at Pure, Caesars’ 36,000-square-foot nightclub, would be like. That’s where celebutards like Ashlee Simpson, Lindsay Lohan and Kim Kardashian party!

Caesars set us up with a VIP table and bottle service — Belvedere Vodka and cranberry juice, orange juice, sodas and bottled water. Normally it costs about $1,000 for this table overlooking the dance floor and that includes two bottles of booze. Unfortunately now that I did it this way, I don’t think I can do Vegas nightclubs any other way…should I ever do them again. It was so sweet having our own cordoned-off area, away from the mayhem of the sweaty masses.

“Spring Break 2009!” the dj hollered to the crowd who cheered in return. I turned to my friend Sarah and rolled my eyes, “OMG, I feel so old!” We didn’t have to rub elbows and knock knees with the kids on the dance floor but it was good to get out every now and then and mingle. But sure enough, I liked dancing wayy better back at our booth. There, it wasn’t crowded with people running you over as they tried to 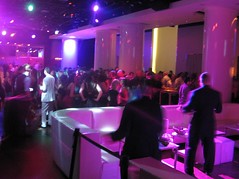 maneuver from one end of the dance floor to the other. Or guys trying to freak you.

When we returned to our booth, our PR liaison hurried us over to the Pussycat Dolls Lounge because I had asked if we could include them in our survey of the club. The PCD Lounge is located in a separate venue inside the Pure nightclub so you just pay one cover for both venues.

I’m not sure what the cover is. But a quick search online revealed VIP hosted entry and cover for $40 for ladies and $85 for men. It’s a smart, albeit pricey, way to go judging by the reviews on Yelp which complain of the long non-moving lines and mean bouncers. Apparently there are also party bus/club hops where you pay one fee and gain VIP access to four clubs.

In our case, the PR liaison rushed us to the head of the line passed the waiting folk; some of them asked if they could come in with us. Twas awesome. More pics of Pure.

Soo, the Pussycat Dolls. They perform in this cute 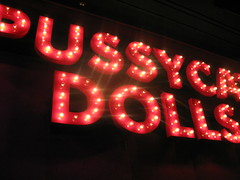 cabaret-esque club every Tuesday, Thursday, Friday and Saturday night. Their stints are kinda short and they go on every half hour so we only caught one of their sets.

It was like rocker chicks doing burlesque. I guess the giant champagne glasses and swings come out later in the evening. I loved their costumes though. And they’re still fun to watch making this a must-do should you ever find yourself in Pure. I wondered how this compared to the original Pussycats at the Viper Lounge back in the day. I know that venue was wayyy smaller. More pics of Pussycat Dolls.

I’m not sure I’d seek out a club experience ever again as it’s so not my scene. But, if someone offered me VIP treatment again, I’d be all over that. It’s the only way to do nightlife in Vegas.