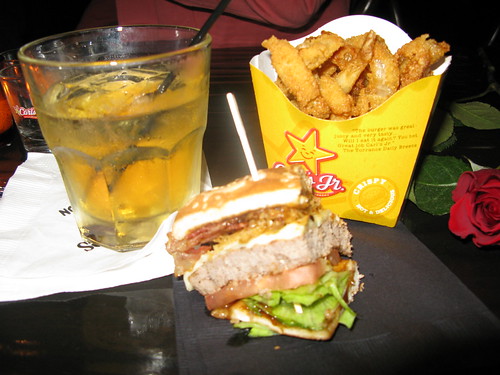 A Carl’s Jr. truck had pulled up to the bar’s parking lot and servers in the venue passed around platters of the burger thankfully cut into quarters. There were also CJ containers of onion rings and French fries. Unfortunately the food was kinda lukewarm but that’s to be expected I guess since it came off a mobile Carl’s Jr. However, a taste of the burger was all I needed. I can’t imagine tackling a whole one on my own. OK, I lied I did manage to devour 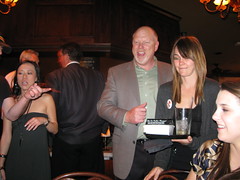 four quarter pieces. It was just more manageable and not as intimidating in those slices!

I hadn’t had a Carl’s Jr. burger in years. And because I’m not used to these burgers anymore I felt gross after, and oh-so guilty. I also kept eating the cold onion rings for some reason. “I know! I can’t stop eating it either!” said my friend estarLA.  It’s not like the onion rings tasted good all cold, dry and bready.

As for the burger, it sure had

a lot of that bourbon glaze, too much, too saucy. However, the crunchiness of the onion straws added an interesting texture to the burger. And although the bacon was soggy I still loved the smokiness it contributed. Mmm, bacon.

But, yeah, I could never have another burger, no matter how entertaining I find that Dr. Bourbon commercial. I’d have to be running seven days a week and be in a happy place in my head so that I wouldn’t kill myself over the guilt. The Six-Dollar version of this burger has 970 calories, the single has 730 and the double, a whopping 1,000! 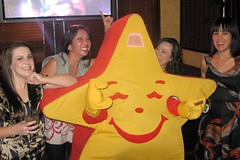 As for the party itself, you can’t go wrong with an open bar. The specialty cocktail of the evening was a Carl’s Jr. Twisted Bourbon meant to complement the burger. Comprised of bourbon, agave nectar, lemon and lime juice and topped with club soda it was simple enough. Very light. Would have been better if they did a heavier pour. “I drank one and didn’t feel anything,” estarLA said, convincing me that we’d have to go with a bourbon on the rocks for the rest of the night. But later when we asked for more bourbon in the cocktail it came out much much better.

The rest of the evening’s festivities included a speech by the head honcho of Carl’s Jr. and the screening of a couple of CJ’s commercials, that Kentucky Bourbon Burger doctor one and the sexy one of what’s her face from Top Chef wolfing down a Western Bacon Burger. The guys in the room really loved that last one. 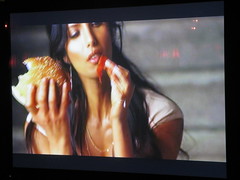 Speaking of which, the dudes in this crowd were kinda douchey, where I got the sense that they’d only talk to you if they wanted something from you. I flashbacked to the time when I used to hang out with really hot girls and they dragged me to bars like Bar Marmont and Teddy’s. Boo. Fortunately, my roommate Kristina, estarLA and Sarah from The Delicious Life/Tastespotting were there to keep things fun.

And I know we were at Crown Bar during a private event but I glanced at the specialty cocktail menu displayed over the bar and all ranged in the double-digit prices and included ingredients like Black Cherry Effen Vodka. Blech. At least I know I’ll never have to come back.