Westside Tavern: Where Everyone Will Know My Name 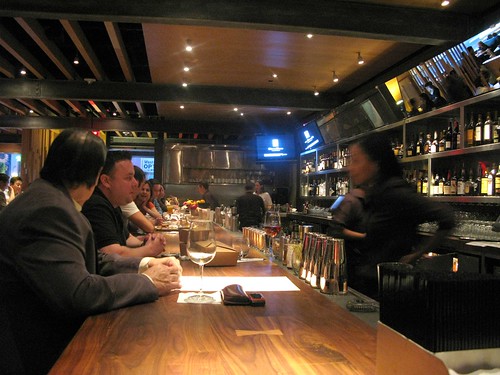 Yes, West L.A.’s Westside Tavern is FINALLY open. Last year Chef Warren Schwartz’s California comfort food restaurant was supposed to open in June, then October, and then in time for the holidays. Oy! But after several menu changes and staff hirings, it’s finally here and much to the excitement of the crowd of diners and drinkers there last night. 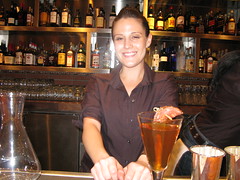 The restaurant, located on the first floor of Westside Pavilion (the theaters and Barnes & Noble side), opened at 5pm yesterday and was in full force bustling mode by the time I got there around 7pm. All the seats at the beautiful 50-foot-long walnut bar were taken but I found my friend Kylee, who’s a bartender here but used to work at Katsuya Brentwood.

Immediately she found me a seat and presented the menu to me. But I already knew what I wanted since I was able to get my greedy little hands on the pre-Prohibition Era-esque cocktail menu created by mixologist Ryan Magarian earlier in the week. The Anejo Manhattan (all cocktails are $9) called my name, if not for its tequila take on my fave cocktail then for its garnish of a salami-wrapped cherry. The drink itself is comprised of El Tesoro Anejo Tequila, Sweet Vermouth, Licor 43 and Angostura & Regan’s No. 6 orange bitters. 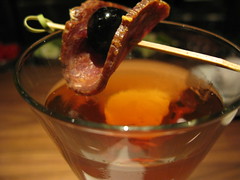 Kylee suggested that I sip the drink first then take a bite of the garnish and then take another sip to enjoy the savory flavor of the meaty, sweet garnish with the cocktail. It was a lovely taste sensation. Although this Manhattan doesn’t come on nearly as strong as a whiskey-based one, it was still delightful.

For food pairings with the Anejo Manhattan, bartender Danny suggested the grilled prime flat iron steak ($22), saying that the meat and bearnaise sauce would complement the rich flavors of the cocktails nicely. But I had already made my mind up to get the James Ranch Lamb French Dip ($16) with caramelized onions, horseradish cream and rosemary au jus.

At first I was kind of leery of ordering lamb, poor baby baa-baa, but then my roommate Crystal who had joined me at the bar reminded me that I actually loved the lamb that she and my other roomie Kristina had made for dinner before. 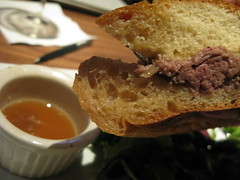 And I’m glad I went with it cuz it was so effin gooood. The meat was so tender and savory but when I wanted that extra mmmmm I just dipped the sandwich in the rosemary au jus. I thought for sure I’d be able to save the other half of the sandwich for future consumption but it was too yummy to box. I also think it helped that I had ordered the side of mixed greens instead of the Kennebec potato fries or salt and vinegar potato chips.

BTW I asked Danny and Kylee for a couple more cocktail-and-food pairing suggestions and they recommend the mango daiquiri with the ale-battered halibut and salt and vinegar chips. But I’m inclined to think the grilled salmon with tangerine-cucumber vinaigrette might be a better match. Also they liked the Pepper Smash cocktail (Aviation New Western Dry Gin, lemon and bell pepper juices and clover honey syrup) with the Pacific Mussels with Spanish chorizo, which, actually Natalie aka Liquid Muse tried. 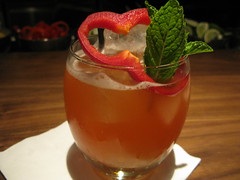 Yup, I was fortunate enough to run into cocktail blogger/author Natalie as she wanted to visit Kylee and check out the new place as well on opening night. Oh, and the mussels with the chorizo were pretty yum. And the Pepper Smash, despite my intense dislike of bell peppers and spearmint, was actually hot damn! I only got a sip but it kinda reminded me of the spicy, vegetable-ness of a Bloody Mary.

Later, us three girls split an order of the brown butter apple pie ($9). Kylee said we had to and that it was her absolute fave of the desserts, how could we say no? The mini pie showed up looking very much fresh out of your mama’s kitchen, complete with hand towel cradling the pie dish it came in. Even though we were splitting it, it still seemed a daunting task to undertake. The pie was deep with a thick-looking cross thatch crust on top. “Wait for the ice cream to melt into the crust,” Kylee suggested as we sat there with our spoons in hand. 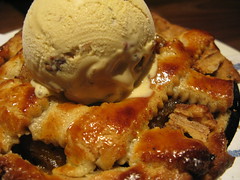 Nope, couldn’t wait. We dug in and omg…heaven. That butter pecan ice cream is just divine with the warm apple pie. Sadly even though there were three of us, we still couldn’t finish the pie. “This would be a good place for just cocktails and desserts,” Crystal said. And I’m inclined to agree. There’s no way anyone could have a full meal and then go on to dessert. Maybe take it to go?

Verdict: I’m sooo thrilled that Westside Tavern finally opened. It’s a great place to get cocktails in West L.A., especially before or after a movie at the Landmark Theatres there. Oh, and the food ain’t so bad either. A bit pricey for me considering the $14 cheeseburger but I’m willing to indulge every now and then. I can see myself becoming a regular. Dibs on that bar stool at the end of the bar by the chalkboard.