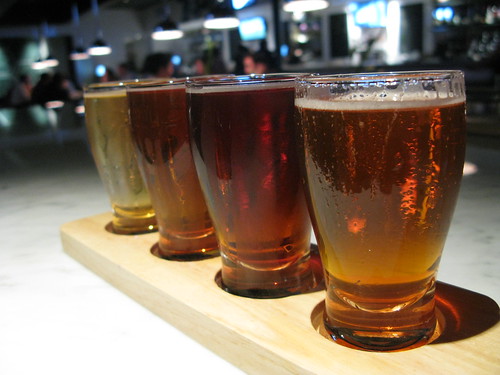 OK, I’ll give it to them, those USC kids are lucky. USC Hospitality’s Lab Gastropub that opened up near the campus is wayy too cool a beer bar for a college town. In Westwood, we got BrewCo. Wut up with that?

At the Lab, you’ve got a cross between high school science class setup and a fancy hotel restaurant. Chalkboards with scribblings of Beautiful Mind formulas decorate the walls, beakers are used as pint glasses and the hanging lab lights and science-themed murals complete the look. Fortunately even though the theme is all things laboratory, it’s not a cold, sterile environment what with the warm wooden floors, the honey-leather armchairs and the long wooden tables. 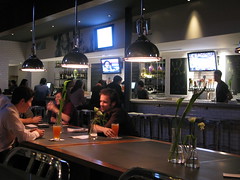 Again, I can’t believe this is a college bar. Or is it? Sure, it’s right across the street from USC but where are the peanut shells on the floor, the dartboards, the college colors, the drunken frat boys? It’s too pretty.

And on the beer menu there’s nary a Bud Light to be found. Rather 14 brews are on tap, like Blue Moon and Fat Tire, and even some house beers specially crafted for the bar by San Diego’s microbrewery, Karl Strauss.

The night I went with my friend Tiny Nancer, a USC alum, I didn’t know what to get so I ordered the

Lab Sampler ($7), four small glasses of the draft of my choice. I went with the Lab Amber Lager and Trojan Blonde (both the Karl Strauss house beers) as well as the Green Flash IPA and the Red Trolley Ale since those seemed to be the only microbrews on tap.

Unfortunately I wasn’t a fan of any of them. None were flavorful, welll, except the Green Flash IPA, which tasted like I was chewing on pine needles. Blech. (A shame considering I loved Green Flash’s Grand Cru which I tried at 4th Street Vine.) The Trojan 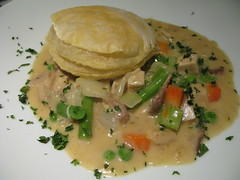 Blonde was the least bad one as it was just very light. The Red Trolley was watery, barely any flavor, except a nutty finish. And the Lab Amber Lager tasted like a poor man’s Newcastle.

If I ever come back here, I’m going to stick to what I know, a sampler of Guinness, Fat Tire, Blue Moon and Stella.

At least the entree I ordered was yummy. I got the turkey pot pie ($10) which was basically a plate of a deconstructed pot pie — vegetable bits covered in turkey gravy with a floating pastry crust. The gravy was nice and buttery, the turkey pieces tender and the pastry was nice and flakey…OK, I’m just a sucker for that buttery gravy. It made everything taste good.

That might have saved the calamari we ordered which, by the way, arrived with our dinner and not before it. Yeah, the squid was kinda mushy and the breaded part just fell away leaving me to work on the calamari. Not fun or yummy. 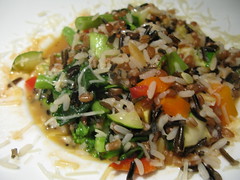 which arrived looking very much like a rice pilaf with gravy instead of creamy risotto. Perplexed, we flagged down our waitress who verified from the chef that it just looked like that because it was 12-grain risotto which, I guess, is ricelike and not creamy at all. “But he said he knows what you were thinking it was and can make that for you,” she offered. That was nice but not really the point. I mean, isn’t risotto creamy?

Anyway, we were about to order dessert but weren’t feeling the selection of chocolate creme brulee and banana split.

The verdict: Even though this is a different college bar with beautiful decor, an airy space and a large beer selection, it seems like a beginner’s gastropub. It’s like the idea of a gastropub without any real know-how yet. For instance, just because you sprinkle some parsley on a dish does not mean it’s gourmet. And Karl Strauss and Green Flash are fine but how about more microbreweries on the beer list?

I wouldn’t make a special trip out here for some Lab action but I will say it must be a nice place for the students and alumni to congregate.