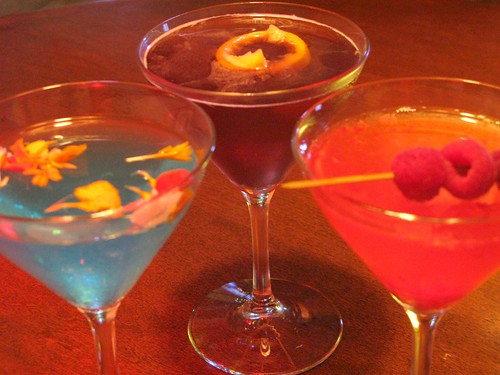 What better way for a Los Angeles bar to celebrate our city than with astrology cocktails? Yup, X Bar in Century City, has perhaps the funnest theme cocktail menu idea I’ve seen in a long time. And seriously, couldn’t we all use some fun nowadays? X Bar created 12 cocktails ($12 each) to represent the zodiac signs and will only serve each sign’s cocktail during the dates of that particular sign. Not clear? Well, right now since we’re in Pisces, so you can try the Pisces cocktail through March 21, followed up by the Aries cocktail. 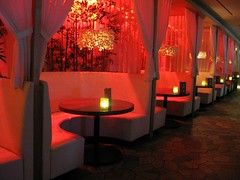 If you’re big into astrology, you’re probably hoping that they tailored each drink to suit the sign of each zodiac. How cool would that be? Cancers are moody and really sensitive meaning they’ll probably like whiskey cocktails with ginger beer effervescence. OK, I made that up; wishful thinking. But, alas, the drinks here are simply created with the color of each sign’s birthstone in mind.

So for the Pisces’ aquamarine stone, the cocktail is a blue hue reminiscent of decorative ponds and blueberry Otterpops. It’s a beautiful drink to be sure with its sprinkling of edible flower bits floating on its surface, but the imbibing of it isn’t all that enjoyable. Made of Absolut Los Angeles, lemonade and blue curacao it was very light, almost watery with a very faint taste of lemonade.

Aquarius’ amethyst cocktail was a dark purple concoction made with Grey Goose L’Orange, Patron Citronge, pomegranate juice, white cranberry juice and violet syrup. Oddly enough, we could taste the perfumey-ness of the violet juice more than the actual spirits themselves. And it actually reminded us of grape juice, but perfume-y grape juice. 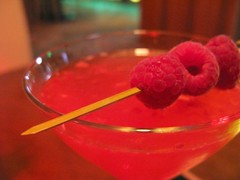 And if it happens to be your birthday and you’ve got valid ID, your astrology cocktail is on the house.

OK, as you can probably tell, I wasn’t all that crazy about the astrology cocktails that I tried, pretty and fun though they were. I’m a whiskey drinker and not big on flavored vodka cocktails. But I did manage to find one cocktail on the regular drink menu that wasn’t too bad: the Lemon Basil martini which is made with Charbray meyers lemon vodka, sweet n’ sour and torn basil. The basil complemented the tartness of the lemon nicely.

Drinkers on a budget can partake of happy hour half-price appetizers, well drinks, wine and draft beer from Mondays to Fridays 4 to 6:30pm. I highly recommend 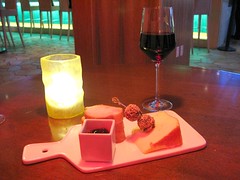 the chilled crab dip (reg. $14) which is creamy and has huge pieces of crab meat. Slather that on the accompanying bagel chips, soft baguette and crudite. The one-pound of fiery chicken morsels (reg. $14) is extra spicy boneless chicken with roquefort and celery. The chicken is so tender and juicy and not the dry meat pebbles you usually find in most bar happy hours elsewhere.