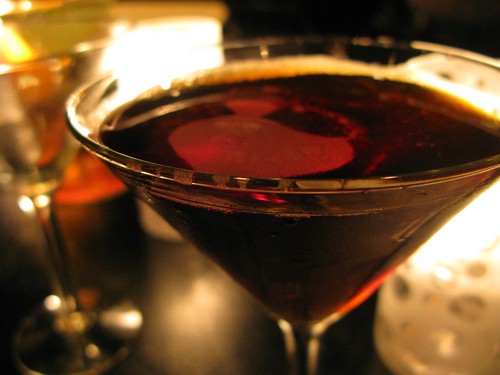 I heard all this hype about Silver Lake’s new bar Barbarella Bar. Who didn’t write about it? Well, besides me? So when I got an invite to “experience Silver Lake’s newest neighborhood hang,” I naturally rsvp’d. Plus the promise of free specialty martinis, 24 beers on tap and food helped a bit. 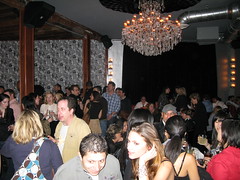 When I got there and walked into the low lit bar for the first time I couldn’t help but think that it seems out of place in Silver Lake. Hot women bartenders and servers sporting black bustiers (not that there aren’t hot women in SL), a flavored-vodka heavy menu, valet parking? Seems like it would have fit in better on Sunset Strip in WeHo.

Of course, though, there’s none of the velvet rope attitude and they do have a happy hour where you can get cocktails and appetizers for $6 as well as $4 draft beer and that’s for seven days a week from 4 to 7pm. And the locals seem to like the new bar lots.

But back to that cocktail menu. Friends who have already checked out the bar had told me

Barbarella’s cocktails were on the sweet side and after perusing the specialty selection, it seemed they were right. I stared at the menu, unsure. Since they come in 10-ounce cocktail glasses, I had to be certain before I committed.

Um, yeah. What year is this? 1999? Are Cosmos and “flavored martinis” in again? To play it safe, I went with the Ginger Peach cocktail, which tasted like how 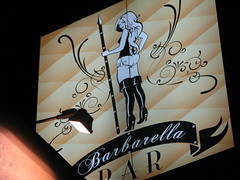 you’d expect, a bit heavy on the Canton ginger liqueur, though. It was the best choice apparently as the subsequent cocktails my friends and I tried that night were progressively worse.

Fiona of Gourmet Pigs ended up shunning her Ginger Cucumber cocktail after two sips. It, too, was heavy on the ginger and didn’t taste like the refreshing spiked spa cocktail you’d think. Unfortunately, it was the only drink she paid for since she had arrived at the bar before the party freebies started. So she tried to make up for it by ordering two other cocktails. I’d like to think she got her money’s worth…

My friend Mikey tried to make things better by fetching me an espresso cocktail and the nuts & berries one. The former was just too sweet for me. Had this been served to me back when I was 21 and had a penchant for White Russians I probably would have loved it. But now that I’m a whiskey drinker with a huge respect for the art of mixed drinks and, yes, a cocktail snob and a half, its uber-sweetness offended my palate. 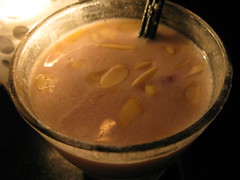 The nuts & berries cocktail was just weird tasting, but then again I just don’t like those flavors together. Raspberry and hazelnut, blech. And its floaters of sliced nuts were so not appetizing.

This cocktail menu really surprised me, though. With all the new bars popping up, boasting well-crafted menus of fresh farmer’s market ingredients and a careful nod to vintage libations, you’d think we were heading in the right direction with regards to the cocktail revolution. But then again this is brought to you by the same people behind the Bungalow Club on Melrose which specializes in these sorts of drinks.

It’s not another velvet-rope scene, which is fine by you—just a come-as-you-are addition to your Eastside arsenal with leather booths that already look lived in…

And the thing is, I like the bar itself. The atmosphere, the ample seating, the crowd, the service. Just not crazy about the cocktails. But at least it’s a well-stocked bar with an impressive list of beers on tap and there’s talk of beefing up the scotch selection with top-notch single malts. So if you don’t want the specialty cocktails, just order up your old stand-by or enjoy an Old Rasputin Imperial Stout.