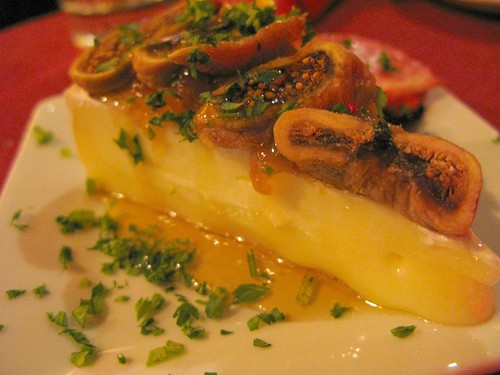 What no one is telling you is that there’s a new Spanish tapas restaurant that just opened in Santa Monica. Actually Manchego has been around for about four months but it seems the only people talking about it online are Yelpers and even they are reluctant to sing its praises. We’re guessing it’s because they want to keep it to themselves. With only about 13 tables in this small eatery, $5 tapas, and BYOB with no corkage fee, who can blame them? 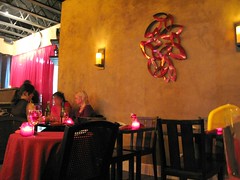 We checked it out on a Friday night after work and the restaurant was completely empty. But when we walked in the host asked us if we had reservations. We blinked, looked around at all the empty chairs and tables and looked back at him. “I just like to keep things balanced,” he said. Fair enough. He then said we could sit where ever except a couple of spots where they had to move some of the tables together to accommodate a large party that was arriving later.

Once seated at a small round table for two up against the wall, we immediately scanned the three-page menu which, fortunately had other items in addition to tapas, like salads, bocadillos (panini-like sandwiches) and platters of cheese, Mediterranean bites or mariscos.

It’s suggested on the menu that you get about three tapas a person. Priced at about $5 each, that makes it a sorta feasible option. But we were too hungry for just that so we went with the

Dulci bocadillo ($12), which is made up of saffron chicken breast, bacon, 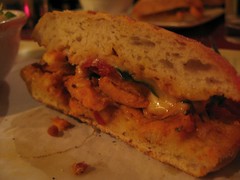 The Dulci was borderline salty but so savory with tender, juicy pieces of chicken. The Toledo, on the other hand, was tangy, not as salty.

For a tapa it was a toss-up between the warm goat cheese, honey and figs and the baked brie with figs and membrillo but the waitress’ recommendation sold us on the brie which she said was a more decadent choice.

Bread didn’t come with our little plate of brie but that didn’t hamper us from relishing the bites of cheese with the yummy slices of fig and honey. It would have been even more perfect with some crunchy nuts. 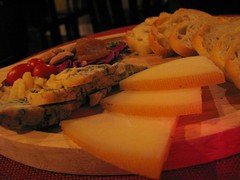 For our “dessert” we ordered a two-cheese platter ($9) with the Cabrales, a Spanish blue cheese, and Idiazabal, a smokey sheep milk cheese. The platter came with a quince spread, some almonds, bread slices brushed with olive oil and some very tiny tomatoes. The blue cheese was very potent and tasted great with the almonds while the smokey Idiazabal was firm enough to spread some of the quince on and chomp on. For bigger platters of cheese it’s three for $15 or four for $19.

If you’re thinking this is a wine bar, unfortunately it’s still waiting to get its liquor license. But the good news is that it’s BYOB AND there’s no corkage fee AND there’s a liquor store located just down the street. They say they’re going to get their license any day now considering that they’ve been open for four months, so fingers crossed. When they do get their license it’ll be for wine and beer and they’re considering charging a very low corkage fee of about $2-$3 because liquor licenses cost money you know.

This is definitely a great addition to Main Street. Too bad it’s so small and doesn’t take reservations during the dinner rush. But if you get there before 6:30, you’ll be able to get seated right away.

By the way, on Thursday nights, there’s Flamenco guitar and reservations are recommended for that.