My dineLA Dinners: Taste on Melrose 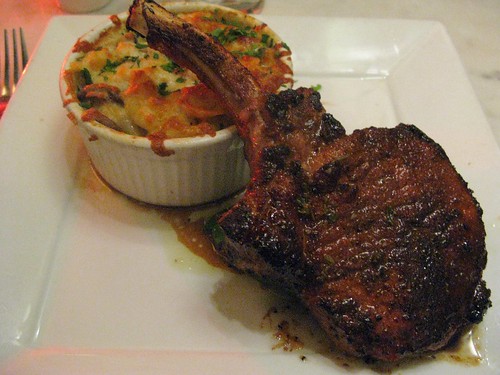 It’s no secret that I love Taste on Melrose. I’ve celebrated birthdays here, my own anniversary and just the simple pleasure of dinner. Yummy comfort food, thoroughly satisfying. So this year, I arranged to celebrate my brother’s birthday here. It was a small dinner for four — me, my bro G., his husband Chris and their friend Jerry. But the thing is, I was the only one who was into the dineLA menu. “If you order an appetizer and entrée, you still save more money than if you get the prix fixe,” Chris said. He’s good at math though while I usually flee anything having to do with numbers…and putting them together and stuff so I just took his word for it.

The restaurant was packed with people and even though there was a perfectly vacant booth across the way, they stuck us in this weird crammed corner up against the wall. Suffice it to say, we’re not a bunch of skinny model types so this just seemed like a mean thing to do. Even meaner that they put a slender couple in that roomy booth that actually had seating for four. WTF? Well, at least our server 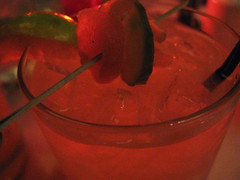 was extra smiley and well intentioned. She seemed to have forgotten about us a couple of times, though. But no harm.

Oh, the good news is that Taste just recently got its liquor license so it now has a new specialty cocktail menu that was created by the restaurant owners and the head bartender. On the server’s recommendation I ordered the Gingerita — a margarita with Canton ginger liqueur — which tasted strongly of tequila but not so much the ginger.

Food: No surprise, the food here made me really happy. Nice satisfying portions of comfort food. My appetizer of the prosciutto and pear salad with mixed greens, prosciutto, sliced pear, goat cheese, walnuts, pomegranate seeds and walnut vinaigrette was divine. But I don’t know how you can mess up such a tasty list of ingredients. Not a lot of dressing but still nicely seasoned. I think I must have eaten this too fast much to Chris’ amusement as he made me take a picture of my empty plate when I was done.

For the entrée, I fought my urge to get the salmon and went with the cumin spiced pork chop with mojo sauce, white truffle oil and mushroom mac and cheese and sugar snap peas. Yup, it was the mac and cheese that won me over. Mmm! That creamy goodness. 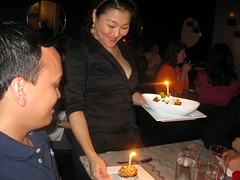 the mac and cheese. Of course, at this point, I was stuffed. Oh, but there was dessert. I chose the chocolate brioche bread pudding but in all honesty couldn’t get through it. Couldn’t eat another bite, except the bit from my bro’s bday chocolate parfait devil’s food cake. AND they even added with a little cupcake to his birthday surprise!

Verdict: No surprise. I love the food here and I felt like I got more than I paid for which is always a good thing for a cheapskate. Would have been nice if they sat us in a spatially appropriate seating area. As it was, it made me wonder if they crammed us in that corner because I told them we were doing the dineLA menu. Eh, speculation, I know. But maybe if you make your reservations, don’t state that you’re there for dineLA. They give you the prix fixe menus anyway when they seat you.