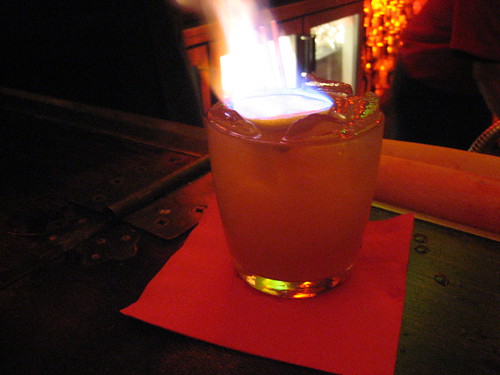 Groovy! My fave bartender Damian Windsor (The Edison, Gordon Ramsay at the London, Copa d’Oro) will now be manning the back bar of one of my fave L.A. bars, Bar Lubitsch.

Yes, starting Monday the 23rd, you can enjoy Damian’s cocktail wizardry during BL’s new bar night, Mod Mondays. Owner Jared Meisler hopes to make Monday your new favorite day of the week with his collection of DJs who will spin ’60s underground soul and rock and roll — a genre of music woefully overlooked in ‘Merica.

But another great thing about these nights? There will be a new cocktail menu featured every week, in addition to Bar Lubitsch’s signature cocktails, making this a must-do event for booze hounds. Damian describes the drinks as “fancy libations inspired by the Mod movement and cocktail era of the late ’50s through ’60s, including fizzes, rickeys and bingo bangos.” Here’s the menu for the debut this Monday (drinks $12 each):

If you find that the wait between Mondays is too long to go without a Damian cocktail, never fear. Mr. Windsor’s new full-time gig will be at Jared’s new bar opening up in the old Coronet pub space in April/May. Did I already say, “Groovy”?