My dineLA Dinners: Gordon Ramsay at The London 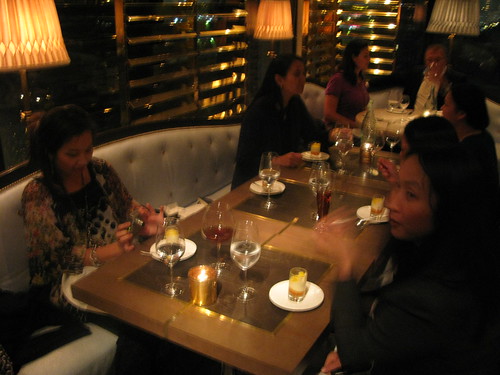 As you well know by now, dineLA’s restaurant week has been extended for over 100 Los Angeles restaurants. The annual event was soo successful (and they really want to entice you to get out there and, uh, stimulate the economy) that many eateries are featuring the prix fixe menu through the end of February. Yay!

If there was a restaurant you’ve always wanted to check out or an expensive restaurant you were curious about but too intimidated by, dineLA restaurant week was the answer to your foodie prayers. Last year, my one dineLA dinner was pretty disappointing but this year I had three great experiences. Well, two and a half great experiences. I’ll just give a quick and dirty of each one starting with Gordon Ramsay’s restaurant.

Gordon Ramsay at The London — $44 dinner 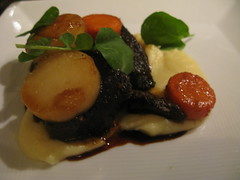 Ever since I started watching BBC’s Kitchen Nightmares, I’ve wanted to check out this restaurant. If Gordon Ramsay can fix failing restaurants, his own restaurant must be pretty good, right?

However, his turn at the London is fancy and expensive and my bank account would never let me go otherwise, so I planned to have my annual girls’ night out here. It would be “our night with hats on,” as my sister and I used to say for getting dressed up.

My party of six had a reservation at 7pm. Since some of the girls were late, they wouldn’t seat us so we killed some time at the bar. $16 for a

Lavender Caipirjito! And it wasn’t even good! Didn’t taste like lavender but, rather a plain ol’, albeit weak, mojito. Boo!

Finally, even though we were still missing one diner, they sat us at this beautiful table along the wall. I kinda wished that they sat us in one of those booths but at least we were by the window and could see, um, the street below and some of West Hollywood. The dining room was pretty swank; white esses of curved 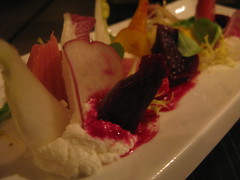 booths linked together and warm low lights. Well-dressed waiters and servers swarmed the area attending to half-full water glasses and diners with questions.

Food: Our dinner portions were annoyingly small in that fancy French restaurant sort of way. Apparently this was a common complaint with this dineLA restaurant. Sure, they were all plated like little culinary works of art but couldn’t they have been bigger? We did get pre-appetizers and pre-desserts though so that helped make us extra stuffed.

My appetizer, the wild mushroom veloute (regular about $14), was creamy and tasty, reminding me of the Campbell mushroom soup my mom used to make for me when I was a kid. Naturally, she used milk in place of the can of water. No, this is not a slight against Ramsay’s veloute.

The entrée of braised ox cheek (regular $22) was sooo tender and I LOVED the horseradish creamed potatoes with it. The pre-dessert, a rosewater sabayon with some ice cream, was a pleasant palate-cleanser. However, hugely disappointed by the dessert, a chocolate savarin (regular $10) with malted milk emulsion, salted caramel ice cream 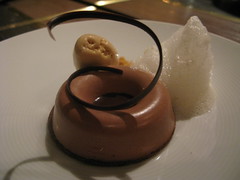 Verdict: If you like fancy surroundings and enjoy looking, oohing and aahing at your food more than eating it AND you’ve got the dough to throw around, this is the place for you. Sure, the food was tasty but for me, since I’m obviously a cheapskate, the small portions and high price of the meal left me feeling taken advantage of. My dinner companions felt the same way.

Here, you’re not just paying for the $44 dinner. You’re also paying for valet parking, the $16 cocktails, the $18 glass of wine, the 20 percent tip…it adds up. Don’t come here if you expect a lot for your money; come if you’re willing to pay for the novelty or if it’s truly a special occasion or if you want to impress your date.