So what can a tourist do in Seattle at night besides check out bars and restaurants? After scouring Seattle’s weeklies, The Stranger and Seattle Weekly, as well as local blogs, Yelp and the Seattle Post-Intelligencer Web site and skipping over live music shows, we found the Radiohead laser show at the Seattle Laser Dome. 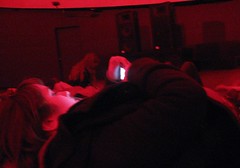 Is Radiohead the new Pink Floyd? Apparently so. This weekly light show seemed to be particularly popular with the 18-and-unders who giggled and squealed under the glowing squiggly lines. I’m not saying it was a bad show. I LOVE listening to Radiohead and watching pretty lights.

The only problem, besides the not-so-great sound system, was that I kept falling asleep. Hey, it was dark, I was lying on the floor (under the center of the dome for the best vantage point) and they were playing my favorite Radiohead songs. It was extra comfortable. (If you go, I highly recommend that you bring a pillow or a fluffy jacket to put under your head.)

Plus, I’m sure it didn’t help that I had had a couple of cocktails at

Tini Bigs, “Seattle’s Second Best Cocktail Bar,” before the show. The laser show didn’t start til 9:15, so getting some preshow cocktails seemed like the perfect thing to do.

I had heard about Tini Bigs from cocktail blogger RumDo 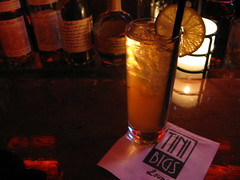 od so knew that even though its online cocktail menu boasted “Dirty Girl Scout” cocktails of Hazelnut espresso vodka, chocolate, mint, cream and graham cracker, RumDood wouldn’t steer me wrong. And sure enough, the low-lit lounge also happens to feature classic cocktails like Brandy Crusta and the Presbyterian.

However, what piqued my interest was the Chocolat Cochon with bacon-infused bourbon listed on the online menu. Mommy! Unfortunately, when I tried to order it, Ryan the bartender related the bad news that the bacon bourbon was now out of season and they no longer had it. Booo!

But he did teach me how I could make my own nectar of the gods: cook some pancetta, cut it into pieces, throw them in a bottle of Woodford Reserve and store that for two months! Or even better, here’s the original recipe straight from its inventor, Don Lee of PDT in New York. I’m soo going to try that.

In any case my second runner-up cocktail was the Presbyterian — Scotch, house-made ginger beer, soda, and bitters. Twas all right but it was really light compared to my bf’s Maker’s and ginger beer, which made me jealous. 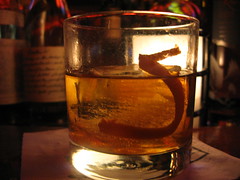 So after I found out that the bar had a variety of absinthe, I got myself a Sazerac. Ryan made this perfectly. Soo tasty with just a teeny hint of absinthe, just the way I like it. Of course, I blame this wonderfully potent drink for my floor nap during the Radiohead laser show later. But what a yummy warm feeling it gave me.

BTW, the food at Tini Bigs was surprisingly tasty for bar fare. We had ordered the Portabello mushroom and the pulled pork taquitos. And although the pork in the taquitos was tender and savory I really couldn’t get enough of that mushroom. If you get a shroom, order just one for yourself. Don’t share.