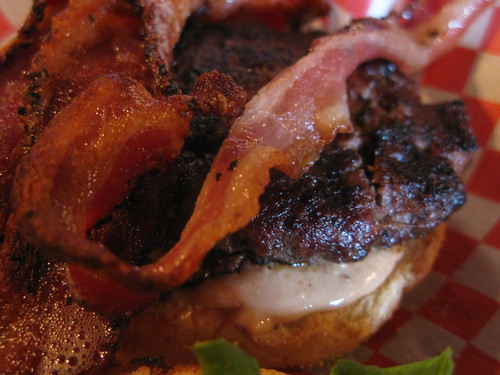 I just arrived in Seattle (only my first full visit — other two were more like stopovers) and I already found my favorite bar! I’m sure there are other great bars out here but do they also have Skee-Ball, the Horse’s Neck cocktail and a bacon peanut butter burger? I’m guessing not.

King’s Hardware, named after the hardware store that previously occupied the 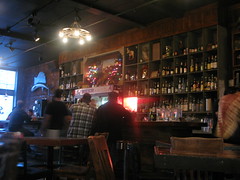 space, is this pseudo dive bar in the Ballard neighborhood of northwestern Seattle. Kooky gift shop, Archie McPhee, is located up the street from here. Bf and I were looking for a place to eat for linner and our original destination, La Carte de Oaxaca — a Yelp recommendation — wasn’t open til 5.

Fortunately, King’s Hardware was further up the street. I was drawn to it by the font of its sign and the fact it was next door to a Rudy’s Barbershop — “Hey, we have those back home!”

At this point, bf and I were famished for anything since we hadn’t eaten since our breakfast before our flight to Seattle. And even the bar/restaurant’s tag line

“Can’t Beat Our Meat” couldn’t drive us away.

Once we walked into the place, it appeared like a bar first and foremost with a prominent fully stocked bar right by the entrance, loud music playing from the jukebox and people enjoying drinks, not food. But we grabbed a booth anyway.

After about five minutes of waiting til someone acknowledged us we finally got a menu. For food, they just have burgers here. Oh, and salad, but who are we kidding? The Wedge, Caesar and a dinner salad. Blah. Yes, the burgers were clearly the stars of the menu, spanning the whole right side of its one page. 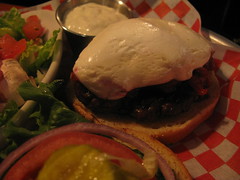 A quick scan of the selection revealed an unusual offering, from the Cowboy burger of fried egg and bacon to the Billy Burger with goat cheese, red pepper and roasted garlic (bf ordered this one). I was just about to order the B&B burger with bacon and blue cheeese “piled high” when the waitress called my attention to the After School Special ($8.50), an unthinkable compilation of bacon and peanut butter. Wuuut?

“People always order that,” she said. “Well then I guess I have to get that!” I replied. “With a side of sweet potato fries, please!”

The burger showed up looking like a normal bacon number save for the thin layer of peanut butter slathered on the bottom bun. First bite told me what I already knew: It tasted like a bacon burger with peanut butter. It wasn’t offensive but nor did it really enhance the burger either. I guess it’s like having a pineapple slice in your teriyaki burger. It’s weird but different and not too bad. The pb here went along with the savory taste of the burger and its creaminess complemented the crispy bacon. But I still kinda wished that I had went with my original choice of bacon and blue cheese.

This burger left me parched, so I ordered up a Horse’s Neck cocktail ($7). 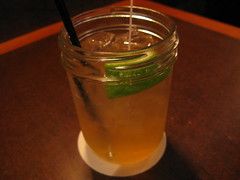 BTW, a great list of cocktails here. The Horse’s Neck is a Prohibition cocktail normally made up of rye and ginger ale, but here they do it with rye, ginger beer and bitters. So refreshing with a bit of ginger spiciness! I had to have a couple of these.

And with still some room for dessert we went with the special on the chalkboard hanging over the kitchen window: a warm chocolate brownie with ice cream. Its warm richness hit the spot. Wasn’t overly sweet or moist. Just right with even some crispness to its edges like a homemade brownie.

After we gobbled up the brownie, we played about 10 rounds of Skee-Ball. I won nine games, bf managed to win once. Heh.

I luuuve King’s Hardware and wish we had this back home. I’ll definitely have to come back again before we leave and check out that B&B burger and maybe have a Dark & Stormy cocktail. Mmmm.