The Fig: Santa Monica's So Fresh & So Yum Restaurant 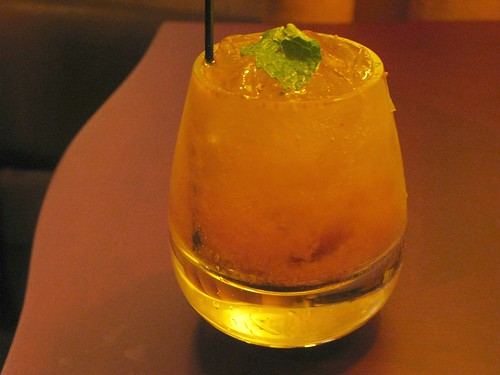 Rosemary & Rhubarb, Blueberry & Thyme, Lavender & Cucumber. Nope, I’m not talking about yummy-scented bath soaps or what I’m currently growing in my garden. H’yeah! Like I know how to garden. These are actually the sorts of cocktails new Santa Monica restaurant, the Fig, is crafting behind its bar. Located inside the fancy (it’s not the last time you’ll see that word in this review) Fairmont Miramar Hotel, the Fig strives to offer not only a relaxed dining experience with a neighborhoodie feel but an enticingly fresh menu. Its cocktail menu and food menu are both built around whatever is in 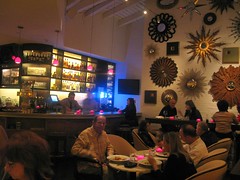 Unfortunately, since the dinner prices for the entrees range from $17 to $36, I could never hope to include this on my roster of go-to restaurants. And even though its beautiful setting is meant to give off a casual bistro vibe, by the time you walk through that grand entrance off Wilshire and pass under that gorgeous 130-year-old fig tree out front and glide through the hushed hotel lobby, you’ll probably feel bad for even daring to show up in jeans and Chucks.

But then I was invited to a hosted dinner at the Fig thanks to H.C. who pointed its PR person my way. And I, of course, couldn’t say no. From the moment we checked in, we were treated exceptionally, lead to a table for two near the front entrance which afforded me a great view of the room and the bar. Our waiter was Raoul. Ah, funny, attentive and knowledgeable Raoul. He even schooled us in how to make our own delicious arugula butter at home (blend arugula, olive oil and sea salt and then stir that with butter)! 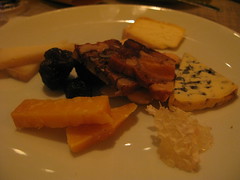 For our dinner we passed over the starters and salads for the enticing cheese “cart.” There isn’t an actual cheese cart, it seemed, but rather a counter — manned by cheese guy Eric — near the bar that displayed all the wonderful local and imported cheeses on hand.

We went for the Beemster X.O., Queso de Mano, and Trio and they arrived with honey, dried fruit and some crackers. We especially loved the queso paired with the honey. OMG, divine. Each cheese is $4 or you could do flights categorized as Progressive ($15), Local ($17), Blue Veined ($16, Challenging ($18) and Rare ($30). Picking our own seemed like the most economical bet.

I didn’t get to try the farm-fresh cocktails but instead ordered the Fig Mojito since that was the signature cocktail and it boasted housemade fig preserves. Unusual!

The cocktail was presented in a curiously heavy old-fashioned glass. I had to lift this sucker with both hands! OK, maybe I just need to hit the gym a little more. But fer sure that thick glass bottom must have been equivalent to a 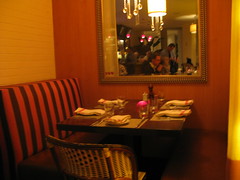 2.5-pound barbell. The drink itself was delicious but it didn’t possess the minty-ness of a mojito, making me question if it in fact counts as one. Didn’t ponder that too long, though, cuz it tasted good. I would have tried another cocktail if my bf and I hadn’t just had cocktails at Copa d’Oro on Broadway beforehand.

Even though bf passed on another drink here, Raoul presented him with a small champagne glass of scrumptious sparkling Syrah. So nice! But then, I couldn’t help but wonder if folks at the other tables were enjoying the same special treatment. Eh, who cares? This was really swank.

When it came to entrees, my cheapskate instinct (and my wallet) would have told me to get the lowest-priced dish on the menu, which was the vegetable risotto ($17), but H.C., who had dined at the Fig before, highly recommended I get the steak. However the 12-ounce New York Strip was $29 and at this point I was stuffed anyway. And then Raoul enticed me by saying that even if I couldn’t finish it now the leftovers would make for a tasty breakfast scramble. Oh, Raoul, you know the way to my heart. 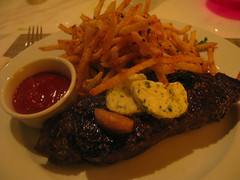 My medium rare steak arrived with a couple pats of blue cheese butter on top and a pile of frites on the side. Oh. My. Gawd. I fuckin’ LOVE blue cheese butter! It made the already tender meat extra savory. I almost forced myself to finish it for fear that it wouldn’t taste as good as a leftover. But alas, my already-stuffed stomach wouldn’t allow me to take in much else. And after chomping on fistfuls of crispy frites I was done.

Oh but of course there’s always room for dessert. We pondered an unusual selection and turned to Raoul for a suggestion. I kinda wanted to try the fancy PB&J sandwich which, here, was cashew butter, strawberry and blue cheese but Raoul said his favorite was the fancy banana split.

In the end, however, we chose the fancy fig bars ($7). Had to! They’re gourmet Fig Newtons! This dessert was in fact housemade fig bars with a side of Greek yogurt ice cream. So very different from 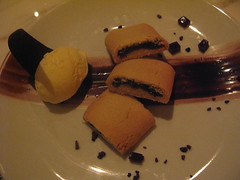 Nabisco’s version, for obvious reasons. The creamy yogurt ice cream was a nice touch with the jammy bars. Raoul tried to convince us to go ahead and add the Meyer Lemon Tart to our order but we couldn’t even pretend to manage it even if this was a hosted dinner.

Afterward, my boyfriend and I just sat back, taking deep breaths. That was quite a meal and I figured that if this wasn’t a hosted dinner, it would have costed us about $50 each. I guess that’s not too bad for a restaurant of the Fig’s caliber.

If you’re looking to just grab some drinks here, know that the bar and restaurant both close at 10pm Tuesday through Saturday, but there is ample bar seating and even a community table. And you gotta try the cheeses. Especially the goat cheese with lavender honey, listed on the menu under “Snacks.” Drool.

More pics of the Fig.