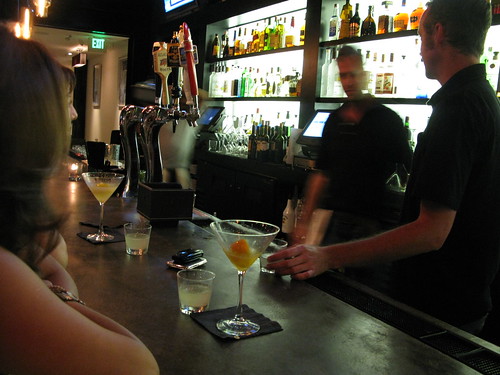 I’m always on the hunt for a decent happy hour on the Westside since I can never seem to make it on time for the ones in Hollywood and downtown. So I was giddy to find that Culver City has a wealth of happy hours, well, I found three. The only thing is they all end at 7, barely giving me enough time to find street parking (increasingly difficult in buzzy Culver City), run down there and find an open bar stool. But I always seem to make it with 15 minutes to spare, so I just double up on my drink order and I’m fine.

Anyway after the jump here are three that I’ve tried.

Fraiche ($3 beer, $4 mojitos/cosmos and wine, $5 appetizers — 5:30-7pm daily): I heard about this from a friend who subscribes to Daily Candy. (I had unsubscribed after getting too many things about stuff I didn’t care about but after this tidbit I resubscribed.) I love Fraiche but find it too hard on my wallet for casual dining and cocktailing so naturally was ecstatic to find that they started a “Gourmet Hour.” Yes, their happy is so fancy it’s gourmet.

At a quarter to 7pm I was surprised to arrive at a fairly empty restaurant bar. Wuut? Did no one get the DC memo? Ah well, everyone’s loss is my gain. I immediately ordered two mojitos (that’s TWO cocktails for $8!) since I now only had 10 happy hour minutes left. The bartender asked me if I was expecting a guest and when I said “no” she looked at me funny. I don’t know why.

The mojitos were kinda small but pretty potent. I started to feel the silliness set in a quarter of the way through my second drink. 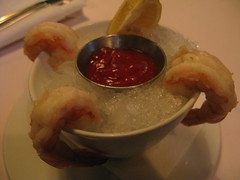 For food, I ordered the cheese fondue and the shrimp cocktail. The fondue was accompanied with bits of bread and green apple. I wish they had just given me bread. For me, the tartness of the apple didn’t really work with the cheese; kinda overpowered it. Now had it been goat cheese instead of gruyere… But mmm, it was divine with the bread and even without the bread. After I ran out of bread, I just spooned that cheese into my mouth. I could see two people sharing this appetizer. But the shrimp cocktail? Not so much. That was simply three little shrimp. Tasty with that sauce but definitely not enough for two and barely enough for me.

This is my happy hour destination in Culver City fer sure from now on…or until I get bored with the same ol’ appetizers and cocktails. BTW, I’m really curious about their Van-hattan cocktail ($14) which is a Maker’s Manhattan with vanilla bean extract. Mmmm, Van-hattannnn.

FYI: Flip-flops aren’t allowed; just ask my friend Shelley who had stopped in briefly before her yoga class. And even though it was inauguration night, the one TV over the bar was tuned to some nature show. 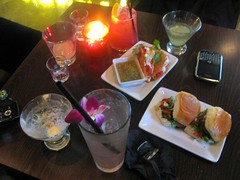 mainly for the fact that $2 off cocktails isn’t much of a discount when they’re normally priced at $11. And I’m not the biggest fan of soju, so that leaves not many drinking options for me here. I liked the pulled pork sliders, which were nice and tender, and the potstickers were decent. But wasn’t crazy about the sweet potato melt which was the equivalent of a plate of nachos with the cheese hardening as it grows cold and transforming this dish into one big brick of bad-for-you. The service was spotty. They didn’t give us napkins or utensils until we asked for them and we had to ask for water several times, too. It wasn’t like they were even all that busy.

FYI: Don’t be fooled by the soju and wine list, this is actually a full bar.

Rush Street (half-off pizza, $4 draft and $5 well drinks — 5:30-7pm Monday-Friday): The only thing I’m not too keen about at this happy hour is that there aren’t enough seats at the bar or upstairs. It always seems packed. So if you go by yourself fine, but if you go with a bunch of friends good luck. Other than that, great happy hour.

My fave pizza on the menu is the white pie and truffle oil one and it was only $6 during hh. Soo deelish. The beer on tap here is decent with choices like Stella, Newcastle, Guinness and Blue Moon. If you want cocktails, I’d stick to the well drinks. I had tried to switch things up by ordering one of the restaurant’s specialty cocktails, the Bourbon Rose ($11), and was seriously disappointed. 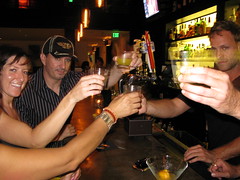 This concoction was comprised of Basil Hayden’s, pomegranate molasses and fresh lime and lemon juice…and it just tasted…um, not good. Too bad, because I really like Basil Hayden’s and they didn’t really showcase its flavors with this drink. I had such a hard time getting through it that the friend I was with pleaded with me to send it back. But no, I stuck it out cuz I didn’t want to be difficult. So instead I just whined to my friend. Heh.

FYI: Make sure when ordering a beer that’s listed as being on tap, to first confirm that with the waiter if you’re a stickler for draft-vs.-bottle beer. I had ordered a Blue Moon (listed on the menu as draft) and it arrived in a bottle.