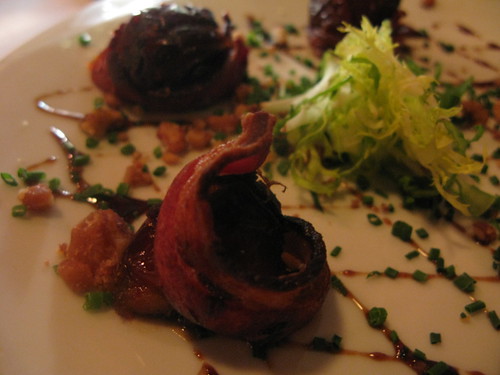 The restaurants on Abbot Kinney in Venice aren’t my usual hang since they’re too pricey for my taste, especially for just casual dining. But after watching the sunset on Venice beach with my roomies, we decided to grab some dinner nearby.

Passing by Joe’s Restaurant and Lilly’s, the displayed prices turned us off. Nah! But then we stopped at Primitivo. Even though their regular dinner prices are yikes, we realized that we were in the midst of Sangria Sunday (4 to 6:30pm). Sangria, red wine, white wine and beer are $4 and half-price appetizers ($6-$9) are available. Huzzah!

Although I’ve heard of Primitivo Wine Bistro for years, I’ve never been before so 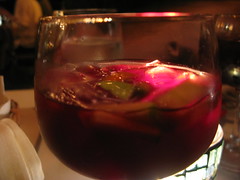 relied on my friend Crystal to give me the lowdown. Apparently the tapas are amply sized and even though I was famished, she said that I could fill up on two plates. Sold!

But first thing was first, we ordered a pitcher of sangria which was good for about two and half wine glasses each for three people. It tasted OK, not rich or sweet — definitely have had better — but it was fine for the price and did an effective job of getting us buzzed.

Scanning the special Sangria Sundays menu, there were many yummy-sounding items. Naturally, I was instantly drawn to the bacon-wrapped date with chorizo ($6).

We were about to amass our decisions but the waitress said we didn’t have to place our order all at once and we could just order as we went along. A good idea so that we wouldn’t overorder but at the same time we kept our eyes on our watches so we wouldn’t go over the happy hour time either. 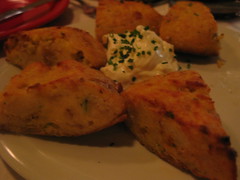 Roomie Kristina ordered the Tortilla Espana ($6) — Spanish potato and onion omlet with sour cream. It was tasty and pretty filling considering it was more like a potato cake than an egg omelet. She couldn’t finish all six of the wedges so ended up bagging that to go. It reminded me of a breakfast item.

Crystal started off with cauliflower soup with truffle oil. I was skeptical at first. A whole soup made of pureed cauliflower? But it was so delicious and savory. And thick enough to fill you up. A perfect prelude to my bacon-wrapped dates.

The bacon-wrapped goodness was exquisite. I thought it would be very difficult to part with a couple to share with my roomies but the bite-size pieces were so rich and satisfying that the four remaining pieces were just enough to make me feel content. I loved the crispness of the bacon giving way to the soft date. Oy. 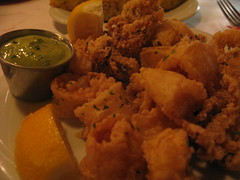 Next up, I ordered the calamari with pesto aioli ($6) and I instantly regretted it. I think it’s fine to share with people but not to have a whole pile of fried calamari to yourself. The pesto aioli was yum but I had a hard time making my way through the dish. I should have ordered the slow-roasted pork with jerk sauce that I initially had my eye on instead.

Fortunately, Crystal ordered the chipotle BBQ shortribs ($9). OMG so very tender and easy to cut with a fork. I wish I could have had more than just a couple of bites but that would have been rude of me to bogart her food.

Content but with still enough room for dessert, the girls and I decided to order the hazelnut crunch cake as well as rum ice cream. Two very good choices, the waitress even said so. The rich, moist cake was accompanied with a little cup of hot chocolate. Didn’t understand that but we appreciated it. A nice taste sensation, alternating between the crunchiness of the chopped hazelnuts and the silkiness of the hot chocolate.

But I loved the rum ice cream more, strangely 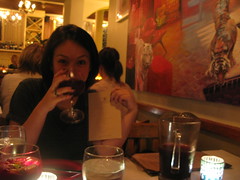 enough considering I’m a chocolate fiend. But this ice cream actually tasted like rum without being too alcohol-y. I definitely need to order my own next time.

After our wonderful experience here, we made a pact to make this “our” restaurant and would try to make it to Sangria Sundays every week. It’s the perfect place for a girls’ night out; sipping red wine and noshing on finger foods and for decent prices. We each spent about $30 that night.

Primitivo also has a happy hour Sundays through Thursdays but it’s literally just an hour — 5:30 to 6:30pm. And that’s only for the bar area. But with Sangria Sundays, you can enjoy your tapas at a table. A good thing considering how quickly this place fills up during these cheapie hours.