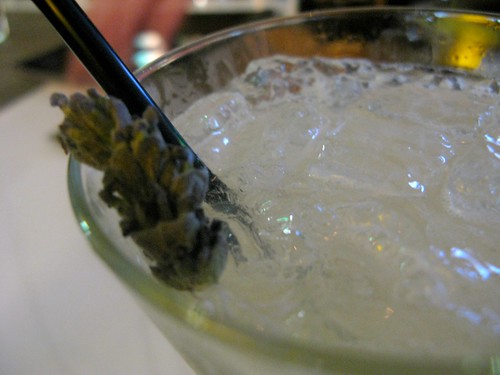 New downtown Mexican restaurant Casa Cocina y Cantina had a press release boasting a menu “unlike any other Mexican restaurant menu in Los Angeles.” But I couldn’t help but wonder if that held true to its cocktail list as well. So my friends (Johnny the Fish and Tara) and I stopped by on a very chill Wednesday night and met with Billy Fanning, the restaurant’s mixologist.

His specialty cocktail menu is a mix of traditional Mexican staples, unique creations and seasonal concoctions and of course we had to try several.

Glancing at the menu, you quickly pick up that the cocktails are primarily comprised of fresh juices, herbs and housemade mixers. Very promising. 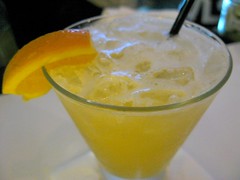 Billy had nice back stories about how each cocktail came to be but we knew that how they tasted would be the only story that mattered in the end.

Gran Casa Margarita ($10): Gran Centenario Reposado tequila, agave nectar and lime juice. We found this to be our favorite of the bunch, tasting just right in flavor and potency. 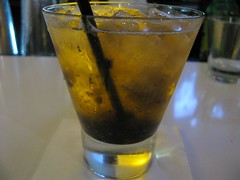 **cider. The Chimayo was tasty but very light which is unsatisfying for a cocktail. And even though Billy tried to convince us that it had plenty of booze but was just innocent-tasting, our stone-cold sobriety afterward told us otherwise. It would be fine for someone who doesn’t like the taste of alcohol but then again why would anyone order a tequila cocktail if not to get a buzz?

Paloma Sunset ($11): Corzo Silver tequila, St. Germaine liqueur, grapefruit juice, and authentic grenadine. Tasted too syrupy for our liking. I blame it on all those mixers.

Smokey Margarita ($12): Don Julio Silver margarita with a rinse of Ardbeg Scotch and house smoke salt. The Smokey Margarita which boasted a liberal seasoning of house smoke salt was in fact too strong and too salty. Its briney potency interfered with the taste experience of the tacos we ordered. So we tried it without the salt but that made it too plain. In the end we discovered that just the mere dusting of the salt on the rim was the best solution, complementing the 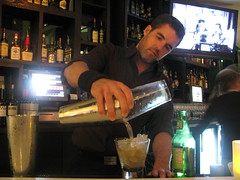 smokiness created by the scotch rinse.

To his credit, Billy was a very good sport who was open to our suggestions. He had no illusions about this new restaurant. After all, it just opened and is still getting its bearings, still trying to figure things out.

In the end of our visit we found the Gran Casa Margarita and the lavender margarita to be our favorites and would definitely order those again…and again. BTW, the house margarita on the rocks, although perfect for those who don’t like sweet drinks, seemed heavy on the ice and short on the liquid.

Quick food suggestion, we tried all four tacos and found the Tacos Al Pastor ($9) — with spit-roasted pork, tomatillo avocado sauce, cilantro and shaved onion — to be the best. It was the most flavorful and had yummy crunchiness. Our absolute favorite of the tacos.

Oh and order the Guac y Mole but ask for it with the housemade hot sauce. You won’t be able to stop eating those chips with that combo. Dangerous!

Regarding where this restaurant is located, even though Google maps directs you to lower Grand it’s actually on upper Grand off these stairs near MOCA. Don’t make that mistake else you’ll find yourself wandering around parking garages like I did. Oy.