101 Coffee Shop: Smoked Salmon Scramble With a Side of Drama 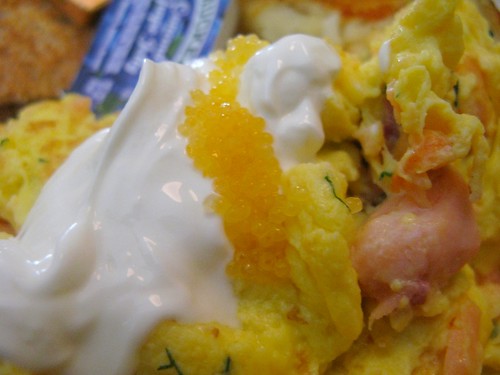 You ever go to a restaurant where they seat you at a table that still has the cash left over from the previous patrons’ check sitting on the table and then wonder what would happen if you took it? Well I found out. I didn’t take the $60 that was sitting on our table for a good 10 minutes before our waitress finally picked it up while taking our order at 101 Coffee Shop in Hollywood. But apparently the kids sitting in the booth behind us took the money left behind on their table. 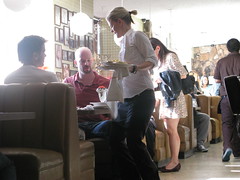 Bf and I were just looking forward to having a New Year’s Day breakfast before a hike in Griffith Park when we stopped off at the coffee shop. Yes, our waitress took a lonnng while to get around to taking our order and bf and I joked about just swiping the 60 bucks and having breakfast elsewhere. But then decided that wouldn’t be a very good way to start off the new year. I’d be paranoid the rest of 2009 thinking that karma would come back to bite me in the ass.

In any case, during our meal, four kids were sat in the booth behind me and then a bit later I saw the restaurant manager go over to their table and ask them who took the money left behind on their table. It must have been a substantial amount considering there were four people dining there beforehand.

I heard one of the kids say, “Yeah, some guy took it…he was wearing a white shirt.” Odd considering all the male servers at the restaurant were sporting brown shirts while the women were wearing white shirts. The manager then left for the kitchen, only to return a short while later. “You’re not getting served until we get the money back,” he told the four, before leaving them to decide what they wanted to do.

They sat for a bit, I heard some discussion, and then they just walked out quietly without any protest. I mean, if I were accused of something I didn’t do, I’d be pissed! I guess they did take it?

With stylish early-1960s decor, red-and-brown booths and a jukebox filled with everything from the Allman Brothers to Marvin Gaye, the 101 has an ambience that appeals to both neighborhood hepcats and motel guests.

So a bit of drama with our breakfast. But that didn’t stop me from enjoying my smoked salmon scramble ($9.95). I LOVVVE salmon scrambles and always order it whenever I see it on a menu. This one came with a large dollop of sour cream and some caviar as well as a side of hash browns and toast. I basically just shoveled the smoky, salty goodness into my mouth. I tried to actually chew the food but it was too yummy. The hash browns were kinda bland and I tried to save them with a sprinkling of hot sauce but that didn’t work. At least the scramble was deelish. 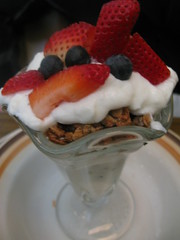 My bf enjoyed his order of breakfast parfait ($5.75) of granola, berries and yogurt. He said the granola was actually impressive and the yogurt was of the plain yogurt variety and thankfully not the ubersweet kind. He’s a bit of a yogurt parfait connoisseur, and very picky at that, so I trust his opinion. However, he did note that even with the side of two scrambled eggs, the parfait wasn’t enough to sate him. Unlike, say, the parfait at Jack n’ Jill’s in Santa Monica which is substantial. So he ended up finishing my neglected hash browns.

The only thing that sucked about our meal was the regular coffee bf ordered. It was sooo weak that when a dash of cream was added, it ended up tasting like tea. I kindly asked the waitress if she could refill the coffee but that still tasted weak so bf just drank it black so that it still resembled java.

But I love having breakfast here. Lots of hipsters to people watch, the food is good and reasonably priced, and the decor brings me back to the ’70s. Love the school portraits hanging on the walls of kids from the ’70s. I half-expected to see my 4th grade portrait when I was sporting uneven pigtails, buck teeth and a polyester blouse. Yikes!