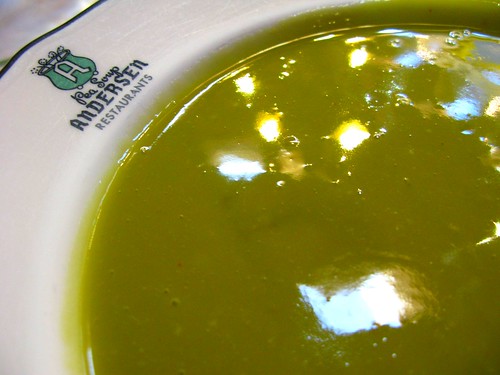 It’s always been a childhood dream of mine to stop off at Pea Soup Andersen’s in Santa Nella off Highway 5 near Gustine. It’s just that when I was a kid we would always go on these road trips and would invariably pass that huge windmill, never stopping of course. My parents only stopped to gas up or go to the bathroom. It wasn’t about the journey, it was all about the destination. 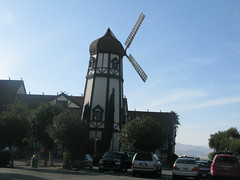 But this time, on the drive back from my trip up north, we stopped! Actually it was my bf’s idea since I’m still of the “let’s just get home already” mind set. I squealed with delight when we rolled up to the windmill.

However, I didn’t stand outside long enough to admire it. Just ran into the building to see what’s what. Inside, we found a coffee shop, a Danish bakery, a gift shop and a dining room. Why two different rooms to eat? I dunno considering that they both seemed to serve the same menu, which surprisingly had reasonable prices, not jacked-up tourist prices.

We opted to sit in the dining room which was airy, more spacious and not as hustley-bustley as the coffee shop. Unfortunately they sat us right up against the service station where the servers got the coffee pots and utensils. But that ended up not being as annoying as I was sure it was going to be. 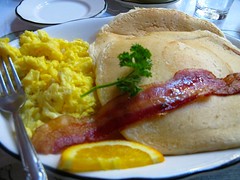 For lunch, I ordered the Andersen’s Traveler’s Breakfast Special which was comprised of a bowl of split pea soup, two eggs, bacon, two huge hotcakes and a cup of coffee. All that for only $8.95! The soup came first and it was pretty good. I’m sure I’ve had better pea soup before, like with bits of ham in it and everything, but this wasn’t bad. I don’t know why it’s supposed to be famous though. There wasn’t anything about it that particularly stood out. It wasn’t thick or creamy or pea flavorful. Just a good soup.

The thing I didn’t know is that you can actually get a refill of soup. So if the rest of your breakfast isn’t enough for you, fill up on soup. However, the soup alone filled me up fast. I couldn’t make my way through my breakfast. I managed to eat one floppy bacon and a bit of my buttery scrambled eggs as well as a tenth of my hotcakes. After that I had to push the plate away.

How can anyone eat that much food? My bf and I looked around at the other 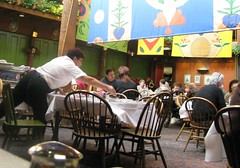 patrons. “Everyone here is huge,” bf pointed out. Yes, that and they were senior. Not that there’s anything wrong with that. Just an observation that everyone else dining here had gray hair. But maybe that’s because older folks like to travel. At least my parents do what with their cruises and road trips.

So back to the food, yes, huuuge portions. Bf ordered the breakfast croissant ($8.50) which had melted cheese just oozing out of it and then he felt compelled to run a mile after finishing it. He hardly touched the slab of hash browns that accompanied it.

But we hit the road instead. And just like that the childhood wish was fulfilled. Not exactly as magical as the windmill had lead me to believe but definitely a nice respite from the road if you want to sit down to a meal that doesn’t come in a fast food wrapper.