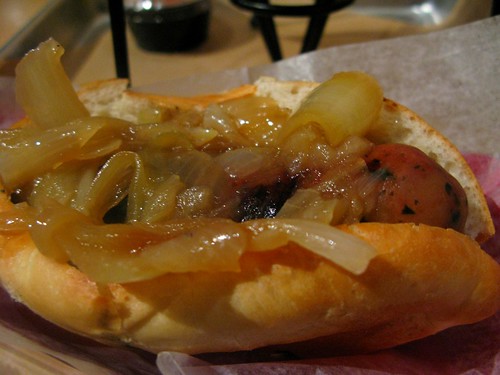 Have you noticed how it’s fuh-reeezing outside? You know what’s the best way to keep warm? Pad on the fat. At least that’s my excuse for pigging out during the holidays. And there’s no better way to get that extra cozy layer than by consuming bratwurst, double-dipped Belgian fries and some fine holiday ale. New downtown sausage place, Wurstkuche (pronounced “verst-ker-sheh,” I think), couldn’t have come at a more perfect time — winter — when your body is craving those fatty foods. 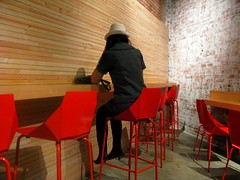 Newbie blogger Shelley and I checked it out on a particularly brisk Friday night, too cold for a cardigan but perfect weather for a hat. We stopped in to kill some time before a CD release party we were hitting at Senor Fish later. After briefly pondering how to even pronounce the name that hung over its door, we stepped inside to find a line of six hipsters waiting to place their order at the counter. Of course there are hipsters here. Wurstkuche is in downtown’s Arts District, they serve Belgian ale and, even though it’s only been open for a few weeks, it already has been written about in Thrillist, Yelp and a slew of other blogs.

I was a little put off by the refrigerated display case of raw sausages and the butcher shop feel of the counter at first. And the red metal chairs and brick walls didn’t exactly make it an inviting place to come in from out of the cold. But once I poured over the menu of sausage options and beers on tap, I started to feel all warm and fuzzy. 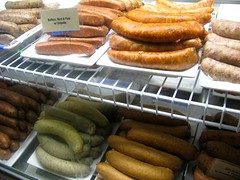 Sausages ranged from bratwurst ($6) to the uber exotic rattlesnake and rabbit with jalapeno ($7.75) — the most popular dogs here — but I took the middle road with a mango jalapeno chicken sausage ($6.75). Each dog is served on a fresh roll that is so unlike the ubiquitous hot dog buns and comes with your choice of caramelized onions, sweet peppers, spicy peppers and sauerkraut. I stuck to the onions.

For drink, I couldn’t decide which draft beer to get. Should I go for a Belgian or German? I appealed to the cashier for a suggestion. “What’s Delirium Noel?” I asked. “Well that guy before you got that. It’s a ruby colored ale,” he replied. Uh, yeah, I saw that. “But what does it taste like?” “It’s a really good ale.” Realizing that I wasn’t going to get much more help than that I settled for that Delirium Noel. Eh, it’s the holidays, I thought.

Unfortunately I found out that it’s a pretty hoppy ale, which I really don’t like. If the dude just said it was 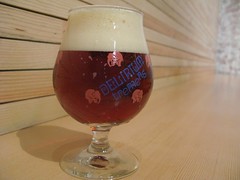 hoppy I would have known to pick something else. Ah well. Turns out staff hasn’t been trained on the beers yet. Just as well since another bar featuring 13 more taps is opening up in the back part of the restaurant next year.

Sitting at the seat along the wall I stared enviously at my neighbor’s Moxie Orange Cream soda. Yes, they have those, too! In fact they had a bunch of stuff that I only recognized from Galco’s like Sweet Blossom Elderflower soda and the line of Fentimans sodas. So designated drivers have something fun to order as well.

I don’t know how long we waited for our order but it didn’t seem too bad. I distracted myself by taking pictures of my new surroundings and Shelley was on the phone trying to tell her friend where to meet us. At this point we both weren’t sure how to pronounce the name. “Just tell her ‘Worst Coochay,'” I suggested. Heh.

Finally our order was up. I had also ordered the fries ($3.50 for one dipping sauce or 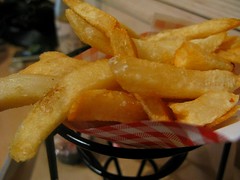 $5.50 for two) with the bleu cheese walnut and bacon sauce. OMG so bad for you but tasted soo good. Its consistency was kinda thick, though, breaking my fries, so instead of dipping I had to slather the concoction with a fork.

The fries were touted as double-dipped where they’re tender on the inside but crispy on the outside. They tasted all right. I’ve had better. For me it was all about that dipping sauce. As for the mango jalapeno sausage. I loved it. So spicy and savory. Couldn’t really taste the mango but I didn’t care. And that roll was so fresh. I can never go back to Wonder’s hot dog buns again, even if it’s for a beach barbecue. FYI, for mustard lovers, there’s a variety to choose from here — Dijon to yellow to spicy — since I don’t like mustard I passed.

But, yeah, loved this sausage place. And I can’t wait to see what the new expansion next year will bring. More beer, extended hours and better beer-educated servers? In any case, this would be the perfect place to head to after spending a couple hours twirling on the Pershing Square ice rink. Or maybe fortify your stomach with dinner here before hitting E3rd, Senor Fish and Weiland Brewery — all within walking distance of each other; Bordello is nearby as well but in the other direction.