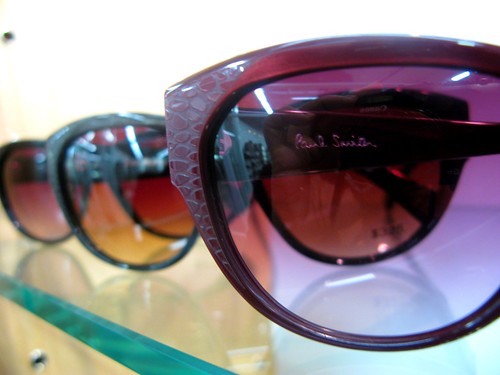 You know how holiday shopping just makes you want to buy more stuff…for yourself? Well, Fred Segal in Santa Monica understands and has come up with a little incentive program called “Love One Another” where you get a gift certificate for every purchase you make from December 5 through the 15.

Basically, when you go in to buy, say, $375 limited-edition Oliver Peoples sunglasses (really pretty btw), you automatically get a gift certificate for $112.50 (30 percent the amount of your original purchase) to either spend now or later in the sunglasses store.

Confusing? Yeah, I know, I had to have David Gonzales, owner of Fred Segal Eyes, explain it to me several times since my brain automatically shuts off when you start talking numbers. Try to think of it this way, if you spend $100 on something, you get a $30 gift certificate.

And this incentive program isn’t just for the sunglasses store, it’s for every store in Fred Segal Santa Monica. It’s just that it only works in the store you made your purchase since FS is a collection of independent stores, not like a department store ya know? So you can buy a hat at the hat store and get a gift certificate to spend later in that same store. You can’t, however, use that hat gift certificate over at the apothecary store to buy soap.

What’s great about this is that you can either keep the gift certificate for yourself OR you can give it as a gift for Christmas to a friend. It’s an actual gift certificate and not a cash register printout or anything so it’s still nice enough to include in a Christmas card.

Like I said, this program ends on December 15 but the gift certificate is good through February 28, 2009. BTW, since it’s a gift certificate it can be used on any vendor, even the ones who usually don’t go on sale AND you can even use it during the big sale coming up in early January!