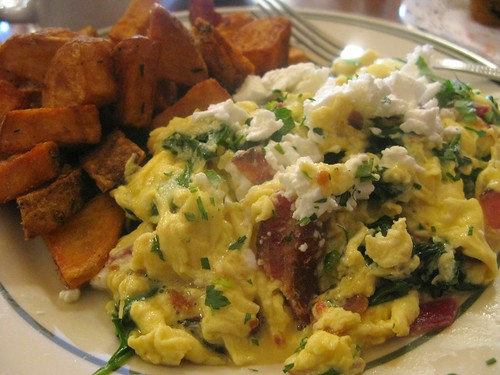 I keep hearing how the Nickel Diner in Downtown L.A. is such a swell place to grab breakfast but consequently it’s always packed. So I took advantage of the fact that most of L.A. was still out of town for the holiday and zoomed on the virtually open 10 East to my destination on a Sunday. Wee!

Finding parking was still kind of a bitch, though, especially since I’m a cheapskate and refuse to pay for it. There are some $5 lots in the area but I was gunning for a free-on-Sundays meter. After driving around for 20 minutes I finally found one several blocks away.

It was only when I realized that I was hauling my big-ass Marc Jacobs bag that I felt really self-conscious walking alone with downtown denizens out and about. Hey, I’m from the Westside and Westchester at that. I’ve walked around downtown alone before but never with a stupid big bag in tow. For some reason, that made me extra sensitive.

In any case, I got to the diner without incident and fortunately it wasn’t packed. Sure, the cool tall tables up front as well as most of the booths were taken up by groups of friends, but since it was just me I wasn’t too worried about getting seated. There was a clipboard to sign in but no pencil. When I looked at it confused, one of the servers asked me if I needed help. “Yeah, I just wanted to get a bite to eat,” I replied, wondering if that was a weird thing to say.

She immediately offered me a two-person table by the back door so I sat facing the room so I could enjoy my surroundings. I had failed to bring anything to read and I left my phone in my car so all I could do was observe my surroundings. Good thing there was lots to look at: hipsters noshing on huevos rancheros, retro signs covering the walls and a very attentive buzzy wait staff.

One server came up to me with a plate containing three baked goodies. “Is this your first time here?” she asked. When I replied in the affirmative she explained that these were some of their baked goods for me to enjoy: a strawberry-flavored doughnut hole, another doughnut hole covered in maple with some bacon bits and a vegan zucchini muffin. Even though I was starving, I saved these for dessert.

When deciding what to get for breakfast I was pleased and a bit overwhelmed by the selection. So many yummy-sounding options! Housemade cinnamon swirl brioche French toast? Or a Dutch baby? Nope, as soon as I saw the bacon, spinach, roasted garlic and goat cheese scramble ($8.50) I made up my mind. That has all my favorite ingredients! A rare find for me with scrambles.

It seemed like no sooner had I placed my order that they were already delivering it to my table. “That was fast!” I couldn’t help but exclaim to the server who chuckled.

At first I tore into the scramble, appreciating its savoriness. Mmm, bacon! But then I got kinda turned off by its goopiness. I don’t like my scrambled eggs dry but nor do I like them all wet. Also I couldn’t taste the roasted garlic or really the goat cheese that the menu claimed the scramble had.

Even though those were disappointing points, I didn’t hate it. It got the job done. Next time I’ll just get the huevos rancheros. The order came with a side of potatoes or polenta but I chose the former which was pretty good. Nicely spiced with the texture of baked French fries. Unfortunately, I couldn’t finish them. Had to make room for my baked goods. And I was glad that I did.

They were all so delicious, even the vegan zucchini muffin which I thought for sure I wouldn’t like. I saved the maple bacon doughnut hole for last because I knew that was going to be my favorite and it was. Couldn’t really taste the bacon too much but the bits still provided a nice bit of a salty contrast to the sweet maple icing.

I would have ordered a bag of that to go but I didn’t see it on display anywhere up front so figured they didn’t sell those to go. It wasn’t until much later that I remembered hearing about their bacon doughnut and how I had wanted to come here for that specifically. D’oh! Ah well, guess that means I’ll have to come back. Oh darn. Heh.

For now the Nickel is only open Wednesdays through Sundays 7:30am to 3:30pm but there’s talk of expanding to dinner and late night hours. Fingers crossed. FYI, lunch fare consists of dee-lish-sounding dishes like a chili-lime grilled salmon salad ($11.50), spicy pulled pork sandwich ($8.75) and a bacon burger ($9.75).