Photo of Citrus at Social’s Apple Cider by Hazelnut Photography

Yes, alas Jones Soda isn’t doing its special turkey and gravy soda for Thanksgiving this year. But never fear, you’ll still be able to drink your mashed potatoes, and in a martini glass at that, or one of the following holiday specialty cocktails. BTW, not all places are open on Thanksgiving so call ahead if you’re really counting on that apres-dysfunctional-dinner drink.

For an organic take on the pumpkin pie martini, check out Culver City’s green eatery, Akasha. Sip this savory concoction of pumpkin spice vodka, TRU vanilla vodka and Silk pumpkin soy with a dash of nutmeg and a graham cracker and brown sugar rim. Or for something nontraditional, try the spicy Autumn Harvest cocktail ($13) made with Veev acai liqueur, Domaine de Canton ginger liqueur, housemade pear/apple juice with cardamom, nutmeg and clove.

If you’re through with pumpkin pie martinis, Citrus at Social in Hollywood is featuring a spiked apple cider ($13). Definitely not for kids, this baby is made with Stoli Vanilla, Goldschlager, apple liqueur, simple syrup and cream and garnished with a cinnamon stick. This cocktail is part of a holiday cocktail flight trio ($12 for apple cider, egg nog and candy cane martinis) but you can also order it solo.

Culver City’s Korean BBQ restaurant, Gyenari, is featuring a Smashed Pumpkin cocktail ($12). This dessert in a cocktail glass is made with rum and pumpkin pie filling mixed with sugar and spice. To make it extra special, it’s topped with a whipped cream float flavored with Grand Marnier, vanilla and sugar. 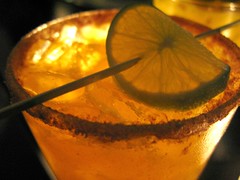 Hollywood’s own Hungry Cat has a very yummy seasonal Persimmon Margarita ($13). The only margarita that will go nicely with this crisp weather, it’s made with reposado tequila, persimmon juice and lime with a cinnamon salt rim. Or for the only whiskey-based holiday cocktail we’ve found (sniff, sniff), there’s the Granddaddy Maple ($13) with roasted ginger-infused whiskey, lemon, orange and pure maple syrup. Gobble, gobble indeed.

Ivan Kane’s Cafe Wa s in Hollywood is making sure you get a buzz from its spiked apple cider ($10.50). Here, you get not only rum but vanilla vodka with your apple juice. Try it with the pumpkin spice beignets.

Lola’s, the Fairfax martini bar that launched the apple martini, will fill your mashed potato cravings with its unique Garlic Mashed Potato Martini ($11). This hard-core cocktail is comprised of potato vodka and garnished with a garlic-stuffed olive. That’s it. Just remember to pop a breath mint before the world gets fuzzy. Lola’s also has its own pumpkin martini which is $11 regularly or $5 during the Hard Times Happy Hour Mondays through Sundays 5:30-7:30pm.

Or, as a special from The Edison‘s own Chris Ojeda, here’s a little hot toddy-ish recipe you can make to sedate your family after dinner. FYI The Edison will be closed all week til Friday.
**
In-Law House Rules Cocktail** (inspired by Ojeda’s in-laws):

In toddy glass or mug place the baked apple slice in the bottom and slightly muddle to break up. Pour the applejack, mulling spiced syrup and water and stir. Add the star anise and grated nutmeg for garnish.

**Mulling spices syrup — make simple syrup (1:1 sugar and water) and let the spice steep like you would a tea over a low heat. Turn off heat and let them steep for 30 minutes and strain out. Mulling spices are available at most grocery stores or health food stores.
***Slice a cameo apple and bake for 20-25 minutes at 350 degrees.