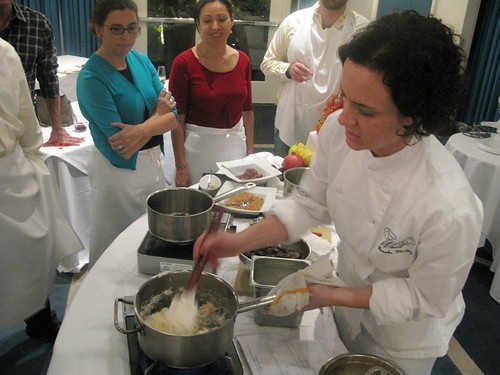 Since I’m throwing a holiday treat exchange for me and my girlfriends, I thought attending the holiday pastry/cocktail class at Whist would be a great way to come up with some new ideas. For the class, we were told we’d learn how to make pate a choux, chocolate truffles and praline candy in addition to cinnamon-pomegranate sangria, eggnog and caramel apple cocktail. 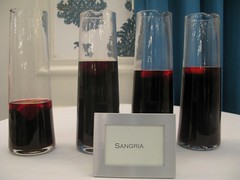 However, as it turned out, I suspect it might have been rough for pastry chef Brooke Mosely to teach a roomful of 14 distracted students — high on sugar and tipsy from prosecco and cinnamon-pomegranate sangria.

We had started off the class with Prosecco Brut Mionetto and since I hadn’t even eaten dinner it was so hard to focus on anything. And although I wanted to suck down that yummy, full-bodied sangria I made sure to pace myself so that I would be able to at least learn something from this class.

Even though this class was set up so that everyone had tables, two peeps per table, Brooke had us stand around her station up front to watch as she threw ingredients together, making it look so easy. And maybe it is easy but I think it also 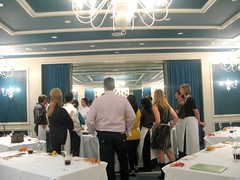 helps greatly if your kitchen is equipped with a stand-up mixer, pastry bags, whisks and silicone baking mats. I’m adding the KitchenAid standup mixer to my Christmas wishlist. In Martha Stewart Blue, please!

Basically Brooke ran through all the demos (the dessert items on this outline) while we watched on the sidelines asking questions. Being lazy and sugared-out, I was fine with this but I wondered if those who are a bit more hands-on minded it.

We went over the pate a choux, praline and truffles while she told us all the different ways we could play with everything. For instance use the pate a choux to make appetizers, filling them with shredded cheese or crab salad. Or you can top your vanilla ice cream with the warm praline 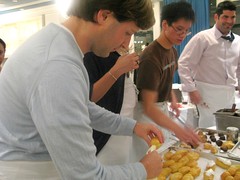 mix. Mmm. I liked how one thing could be used for a bunch of different recipes.

After the demos there was a short break that sorta turned into a free-for-all. Some people used the time to socialize and imbibe more while others returned to Brooke’s table to learn how to stuff cream puffs and dip naked truffles in chocolate. By the end of the night, everyone was joking and laughing, making even these innocent exercises seem like dirty deeds. “You gotta get the tip in there and just stuff it in.” Giggle, giggle. It was a good time.

In addition to the bubbly and sangria, I got to try Brooke’s eggnog. Sooo delicious. Unlike most eggnogs 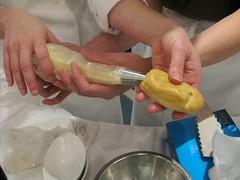 I’ve tasted it wasn’t eggy or thick and you could barely taste the booze but you could feel its potency, which made it very dangerous indeed. So drinkable. I totally wanted to just guzzle it straight from the pitcher but knew that if I did, I’d have to make sure I could get a room at the Viceroy first.

Unfortunately we didn’t get to go over how to make the cocktails and totally skipped the caramel apple cocktail. But at least we were given recipe cards to take home. And they even had takeout boxes available so we could bring home any extra goodies. There were a bunch of the sweets set up in the back of the room near the boxes and since no one really made anything of their own to take home, they all grabbed those. By the time I was able to make it to the table there were only the truffles left. Boo.

Ah well, guess I’ll have to make my 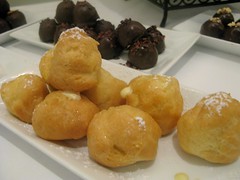 own goodies. I really loved the praline. Brooke had also mixed in some dried berries and macadamias for something different and delicious.

At the end of the night, I was buzzing from all that sugar and I almost don’t want to look at another truffle ever again. Good thing my treat exchange isn’t for another couple weeks.

If you’d like to take a class at Whist, you’re in luck. Next class is the aphrodisiac Valentine class in February. Learn how to make something to seduce a new Valentine or take the class with your sweetheart! Word has it that they may even have a deal for couples.

More pics of the pastry/cocktail class.