Stinkers Bar: Where Trucker Hats Are In Again 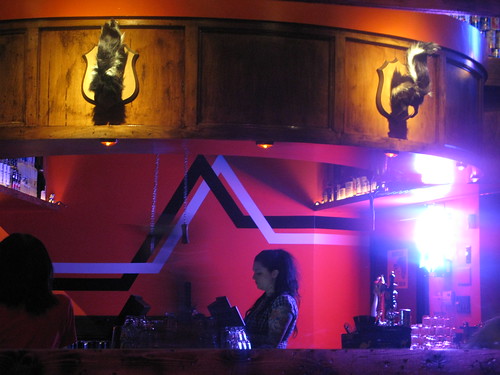 I’ve been trying to get over to Stinkers, the new “trucker stop”-theme bar in Silver Lake, ever since I found out that it had a root beer float cocktail…and the odd skunks-emitting-steam-out-their-asses wall decorations. But I could never seem to make my way over there. Stupid L.A. traffic! (Is it just me or has the city’s population doubled over the last two weeks?) 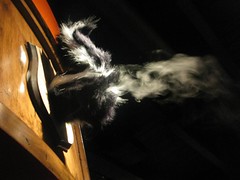 In any case, on Sunday, finally was able to pay a visit. At 8:30pm, the bar was buzzing but not packed. The crowd was an interesting mix of peeps, from the gay boy with a skunk-themed dye job to tatted-up fag hags to folks who look like they just left the office even though it was a Sunday.

And the bartenders were actually pretty friendly and attentive, but it was a slow night so I couldn’t say how they’d be when this place gets packed.

I would have considered this a chill spot to hang had it not been for the ’80s music — think Lisa Lisa and the Cult Jam, not Flock of Seagulls (not that that’s a bad thing) — blasting on at high levels so that conversations with friends were nearly impossible and definitely uncomfortable. After we got tired of screaming “I can’t hear you!” at each other, my small group of four communicated by holding hands and doing a

Occasionally we laughed and pointed at the skunks mounted over the bar when their rear ends were activated so that steam came out of their little butt holes. But most times we just sat there and people-watched.

There’s lots of novelty here for sure — Daisy Duke lacquered on the women’s bathroom door, a tow-hitch-punctuated ceiling, bartenders talking to the crowd over the CB radio, coin-operated spray-on Obsession perfume machine in the bathroom — but once that novelty wore off? Meh. It’s an OK enough bar. Bigfoot Lodge is still my favorite out of Bobby Green’s collection 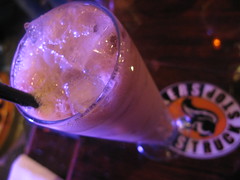 of theme bars (Saints & Sinners, Little Cave, Bigfoot). Better cocktails there for sure.

Here, the root beer float cocktail called the Large Marge ($9) wasn’t as tasty as I would have liked. They make it with root beer liqueur, Stoli Vodka, half and half and then top it with Coke and yet it wasn’t all that sweet or all that strong even though the cocktail menu description promised: “poured a little heavy.” Just as well since we didn’t feel like staying too long.

My friend Shelley ordered the lemonade and said that it was just OK and not all that strong. Crystal, my housemate, on the other hand loved her Diesel Martini which is basically a chocolate martini. It looked lovely and dark though.

If cocktails aren’t your thang, never fear, there are also cans and cans of Colt 45, Coors, Olympia and Miller High Life for you beer drinkers.

So yeah, don’t know if I’d make another special trip to Silver Lake for this bar, but if I’m ever in the area, I might consider stopping by.

However, if you think you might check it out yourself, in addition to dusting off your Ashton Kutcher trucker hat, you may want to brush up on your trucker lingo. FYI, apparently “good buddy” now means “homosexual.”