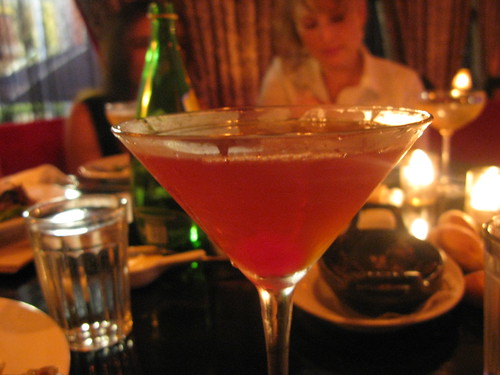 When I first heard about Ivan Kane’s Café Wa s, the piano lounge/French bistro that opened up in Hollywood several months ago, I shrugged it off. Apparently Dave Navarro and Zoe Kravitz are already regulars.

Sounded too fancy; so not my style. What was it? A supper club? A hoity-toity lounge? Do you have to pay for dinner and the entertainment? And its appearance on The Hills when Audrina and her on-again/off-again boyfriend discuss moving in together while sitting at a corner booth here…OK I’ve revealed too much. In any case, it sounded pricey with ample hoopla.

However, when I attended a media dinner there last week to try out the new fall menu, I was surprised by how easily it was to just sink into that bohemian chic ambience, that upstairs absinthe bar, the plush corner booth and even the piano playing. 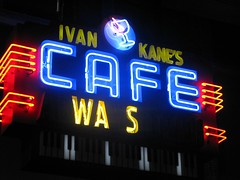 Its décor made you feel like you were having dinner in an absinthe-influenced Moulin Rouge dream. The stairs that lead up to not a door but a mirror and the slowly turning piano (one rotation every 40 minutes) in the center of the dining room probably, inadvertently, served to let drinkers know when they’ve had one too many.

Speaking of drinks, there isn’t a specialty cocktail menu yet, per se but they’re working on it. For now they have absinthe served the traditional way for $12 and a champagne cocktail made with Perrier Jouet and St. Germain ($14) — both tasty. Or you can order your personal favorites from the full bar. I tried their Manhattan and was surprised that they had shaken it — a big no-no with that cocktail. But when I asked them to stir it instead, they obliged without a trace of attitude.

Now you might think the servers were just being nice to me since I was part of the media dinner, but I did join a couple of friends later at another booth and was given the same nice treatment. 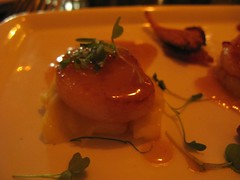 For the media dinner we were served several courses where we had to choose one dish out of three for each course. For my second course (first was the charcuterie and canapés served in the upstairs bar) I enjoyed the succulent coquille Saint Jacques scallops on potato puree and lardons. This wasn’t listed on the regular menu so I guessed that it was a special for this night.

The Medallion de Crabe Napoleon ($15) made with heirloom tomatoes, lump crab and avocado which I chose for my salad was m’ok. But this might be due more to my dislike of tomatoes, and the thick tomato slices here served as a sort of foundation for the rest of the ingredients.

BTW, Executive Chef Alex Reznik takes great pride in ordering his produce fresh and within two to three hours away. He also does his shopping at the local Hollywood Farmer’s Market and likes to order everything, including 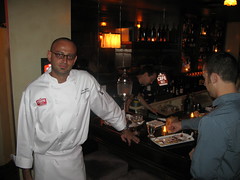 bread, to his own specifications. Apparently he only wants the best; even the coffee is LA Mill.

OK, so back to the meal. For my entrée, I had the Filet au Poivre which is filet mignon and haricots vert sitting on a brioche with green peppercorn sauce. At $34, this is the priciest entree on the menu. Surprising considering the decadence of the venue. The meat was tender and juicy but I still loved swirling it around in the spiciness of the peppercorn sauce.

For dessert I shared the pot de crème and an order of the soufflé au chocolate with JS2 publicist Jill Sandin. These dishes weren’t what I expected. When I think desserts, I think sweet. But the pot de crème really didn’t taste like anything. It seemed to be more about its texture. It was really creamy and the three blackberries provided its only flavor. Now, I’m not familiar with pot de crème so maybe it tasted or rather not tasted as it should have. I was more excited about the unusual absinthe sorbet which was light and only hinted of the green spirit. 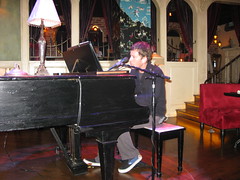 The soufflé au chocolate was a sort of do-it-yourself dessert where you punched some holes into the soufflé with your spoon and then poured the gravy boat of espresso anglaise on it, turning the dessert into a sort of chocolatey pudding.

I would have scooped spoonfuls of this into my gaping maw if I wasn’t already stuffed. The prune-armagnac ice cream complimented the chocolate nicely with its berry flavor.

We closed the evening by enjoying the pianist play The Cure’s “In Between Days.” I’d definitely come back here. It’s a wonderful place if you want to have a glamorous night on the town without breaking the bank…too much.

And it was nice to find the bar so accessible, upstairs or down near the dining area. Come here for a night cap or to close the evening after catching a show at the Pantages. For late-night cravings, the kitchen can easily indulge you since it closes at 2am.