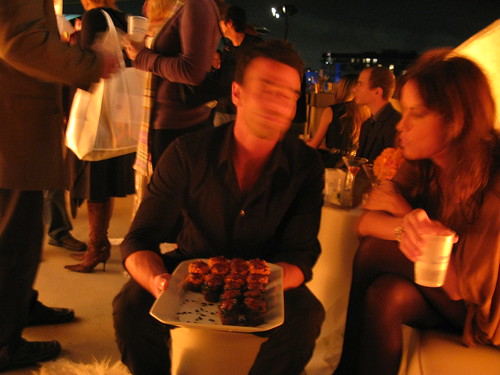 Like most people, I don’t like going to parties by myself. And I especially don’t like going to hoity-toity parties hosted by Paris Hilton by myself. But such was the case this past weekend. LAist Entertainment Editor Elise Thompson invited me to be her plus 1 at a GenLux magazine release party thrown at the deluxe Luxe Hotel in Beverly Hills…on Rodeo Drive. Yes, it sounded pretty fancy. The invite requested that guests “Please dress in festive attire.” Normally I wouldn’t have a thing to wear to such an event but since I had just bought a party frock (pictured right) for future holiday parties from Vanity Room, I figured I was all set.

around 7:30 in the parking garage so that we could walk in together. Unfortunately, she was running late so I thought it would be best to wait for her at the party. Only thing was that when I got in the hotel there was this long-ass line for the elevator. The party was on the roof and they were only letting as many people in as were coming out.

So I had to stand in line. Normally this wouldn’t be a big deal. I could just check email or return phone calls but I was standing in line with some damn beautiful people — actresses, models, cute publicists. It was horrible. And the worst part? Apart from standing in this line by myself for an hour? No one was dressed “festive.” Here I was in this ballerina dress with some sequins on it and tulle. Tulle! And everyone around me, all those gorgeous skinny types were dressed sleek, cutting edge and fashionable. But I tried to shake off my feelings of nerdiness and play it off like I was all confident and stuff. Yeah. I meant to overdress.

FINALLY I was at the front of the line near the elevator. Elise still hadn’t made it but texted that she was close by. I considered hanging back when it was finally my turn to get in the lift so that Elise could just jump in line with me and not have to wait in that slow queue. But the cute girls checking guests in at the door asked, “Why do you want to wait?” Yeah, that was dumb I guess. So I crammed myself in the elevator with the other party guests.

Stepping out onto the roof it was pretty packed and I knew no one. Instinctively I went in search of the bar. There was a wine bar, a table offering shots of limoncello and finally the Ketel One bar. The peartini sounded the most appealing.

I thought for sure that I’d get funny looks and people shoving me out of the way cuz I so obviously didn’t belong but none of that happened. In fact everyone was really nice!

Just when I resigned myself to standing in a dark corner by the vodka bar nursing my cocktail and staring at the nighttime skyline, Elise texted me saying that she actually was able to just jump in front of the elevator queue. I think she must have used that line which I could never pull off, “But I’m press.” 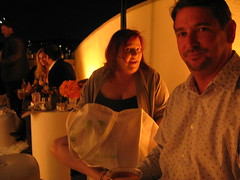 I found Elise sitting on a white couch, her high-heeled maryjanes resting on the white shag rug. She already made two friends — two guys who had something to do with the magazine. I think one of them was bidding to print the magazine or something. In any case I was so relieved to finally see my friend and to have a place to sit on top of it all.

While I sat on the ottoman chatting with our new friends and enjoying the parade of scenesters, I actually had a couple of girls come up to me telling me that they loved my dress! And another woman, who our new friend Jeff (?) introduced me to, marveled at the huge flower ring I was sporting. “Is that Chanel?” she asked with such sincerity. “This? Nah, I got it for 25 bucks.” And then she went on to compliment my dress. Jeff leaned over and said, “See? Everyone loves your dress. And this woman actually works with fashion designers! So she knows her stuff.” Aww, yay. Heh.

Anyway, by 9:50 the party was closing down. I could tell because they turned off the dance music and the stage lights and were passing out gift bags. Oddly enough Paris Hilton and her 13 friends still hadn’t showed up. But her “BFFs” from her reality show were there enjoying the VIP room. Elise chatted with one of them. The Asian gay boy. That’s a boy, right? I don’t watch the show so am not sure.

In any case after throwing the gift bag over my arm (it was filled with lots of flyers and postcards and a couple of skincare product), I bid Elise adieu. She wanted to stick around to see if Paris was going to show up while I, on the other hand, so didn’t care. In the end, Elise never saw her either. But she did send me a couple of shots of our friends posing with Paris! Hilarious. Unfortunately I can’t post ’em cuz they’re press shots and I’d have to buy them. But they’re surreal. POST EDIT: Found one online. This is of Jeff with Paris.