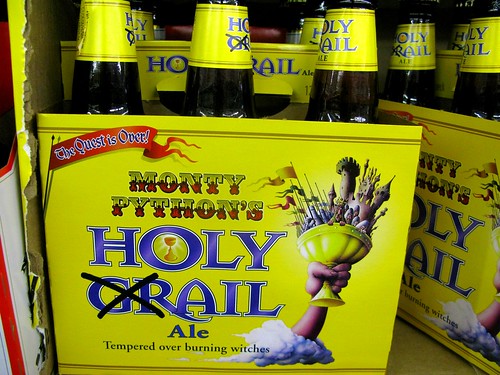 But then I fell in love with the spicy ginger ale that Osteria Mozza’s bar used to make my fave whiskey and ginger cocktail. Chris Ojeda, former Mozza bartender, told me that it was made with Blenheim Spicy Ginger Ale and that I could probably only find it at Galco’s. A check with Bevmo online confirmed this.

So I had to go, especially since buying it online meant forking over a ton of extra dough just for shipping anyway. 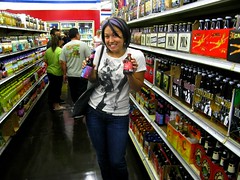 My friend Crystal and I showed up on a Saturday afternoon, problem was that we didn’t know that just the night before PBS re-aired a special that some guy named Huell Howser had done on the store. So the place was a-buzzing and the line for checkout was about 30-people-long and very slow-moving (this was the credit card line; the other checkout was for cash only).

But I didn’t care. I felt overly caffeinated just running up and down the aisles of this old-grocery-store-turned-soda-heaven. They had soda I didn’t know existed and even old childhood favorites. There’s that blue cream soda I rotted my teeth with! And my head just about exploded when I saw the aisles and aisles of the beer from around the world. They even sell wine! And did I mention all the vintage candy, i.e. bubble gum cigarettes?

The best part is that you can buy everything by the bottle and therefore mix and match to your heart’s desire, making your own samplers of unusual beers like Hemp Ale or Monty Python’s Holy Grail or collecting every kind of cream soda there 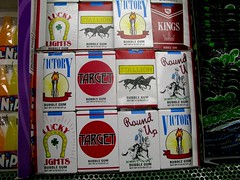 is, which is what I did.

I had made the mistake of asking owner John Nese, a superfriendly and soda-smart man, which was the best cream soda. “One that you haven’t tried yet” was his answer. Finally after I added Hank’s Gourmet and Faygo cream sodas to my cart, he let me know that Moxie was the best. So I got one for later and one to go with my Galco sandwich. Yes, they even have a little sandwich counter in the back so you can enjoy a little food with your newly acquired fizz.

So, yes, what started as a quick trip to fetch a six-pack of Blenheim’s turned into an hour-and-a-half-long excursion ending with a shopping cart filled with about $70’s worth of pop and beer. I reasoned with myself that this was necessary since I don’t know when I’d be able to make it back to this neck of the woods. But really, I’ll be here again to refill my Blenheim’s and definitely to create special gifts for the hosts and hostesses of all those holiday parties I’ll be attending.

BTW, when I had asked John where I could find the Blenheim’s he told me that I really 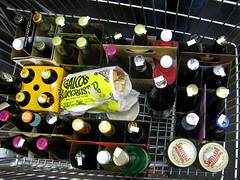 should give Jamaica’s Finest Ginger Beer — Hot Hot Hot a try. He promised it was spicier and better than Blenheim’s. “If it has ginger oil in it, it’s goood,” he said. So I got a couple of bottles of that to round out my collection.

Sure enough when I got home and mixed it in with my Knob Creek, I was wheezing after a sip. It doesn’t hurt your lips or your mouth on contact but you definitely feel the burn at the back of your throat. REALLY good stuff.

If you’re curious, here’s a list of some of the other stuff I got:

Bundaberg Australian Ginger Beer ($1.79): I first heard about this at Bar Lubitsch. Apparently it’s one of the best and Aussies are always happy when they find out the bar carries it.

Fentimans Curiosity Cola ($3.29): I heard this is extra yummy with Knob Creek or some kind of rye plus John said not only was it written up in the New York Times as being one of the best colas out there but it’s an Oprah fave.

Old Engine Oil Black Ale ($4.59): I got this for my bf cuz he’s a gearhead and I knew he’d appreciate its viscous, roasty nature and Ford Motor Co. origins.