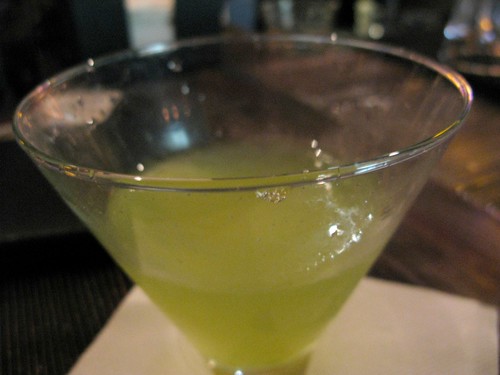 Are you the type of person who LOVES spicy foods and feels that there’s no such thing as “too hot”? I challenge you, then, to try the firewater aka Jalapeno Martini ($11) at the Mission Cantina in Hollywood. Made of vodka, olive juice, the tiniest bit of simple syrup and then muddled with jalapeno peppers, this baby will burn the roof off your mouth.

My friend Shelley had ordered it (since I was the designated driver for last night’s girls’ night out) and I took a baby sip of it. What followed was coughing and blowing out puffs of air as if I had just chomped on a Bhut Jolokia chili. I felt like my lips had cuts on them and I had just poured rubbing alcohol on them.

The drink was tasty enough, like a dirty martini with a shitload of jalapeno flavoring but I just didn’t see how anyone could drink that in one sitting. It’s the kind of cocktail that you order if you want to just stick to one all night. Not me. Or if you are extremely patient and not much of a drinker. Again, not me.

We had pizza left over from our dinner at Delancey next door and Shelley proceeded to pull that out of the to-go box and chomp on it to soothe the burn. To my amazement she did manage to finish her drink in a shorter amount of time than I would have. But then again, she likes the spice.

As for the Mission bar itself, it was pretty low-key for a Thursday night, but I like that. And I especially like the fact that the bartender gave me gingerale for free since I was the designated driver. That would be cool if all bars did that.