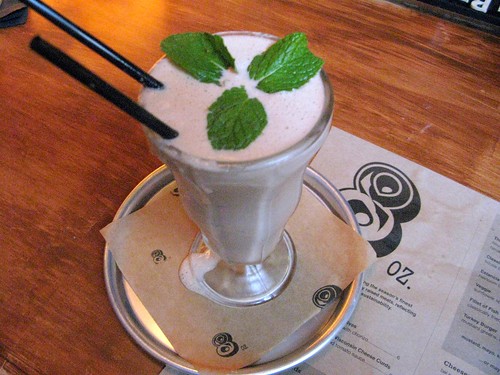 You know I’m constantly on the hunt for cocktail milkshakes in Los Angeles. Mmm, nostalgic fun with an edge! Surprisingly not too many places offer them in our fine city. But one night while I was enjoying the grilled cheese pork rib sandwich at 8 oz. on Melrose, I asked Chris Heyman, one of the owners, if the chef, bartender, whomever got around to making the alcoholic milkshakes I had heard they were planning to put on the menu months ago.

Turns out that since Chef Govind Armstrong is a perfectionist, the adult shakes never made it on the menu. But you can still ask for them behind the back of your hand in hushed tones from the bartender and they’re only $8 each. I’m not too sure what flavors are available and it seems that the bartenders aren’t either. But they will recommend the chocolate mint shake made from Kahlua, Baileys, vodka and housemade vanilla ice cream or the coconut shake which I believe has coconut rum and that vanilla ice cream.

Although I usually hate uber sweet cocktails, especially ones made with creamy, sugary liqueurs, I was pleasantly surprised by the yumminess of this one. It works well in shake form. There was that hint of mint from the Baileys and also from the fresh mint leaves that were muddled into it. So it was naturally tasty and refreshing rather than sickly sweet. It helps that vanilla ice cream was used instead of chocolate, which would have been over the top. And I couldn’t really tell there was alcohol in it, only that its consistency was lighter than a regular shake.

That’s what’s dangerous about these babies; they are innocent-tasting but kick-your-ass potent. It was a good thing I split it with my dinner companion else I probably would have passed out drunk at the bar. Kidding. However, the establishment does recognize the potency of the cocktail shakes and has considered putting a 1-per-person max on ’em.

But since they’re actually dessert cocktails, I can’t imagine anyone drinking more than one anyway. That’s why I held off on trying the coconut shake. After onion rings, that grilled cheese sandwich, a Manhattan and half a shake in my belly, another one wouldn’t have gone down so well. Definitely next time though.