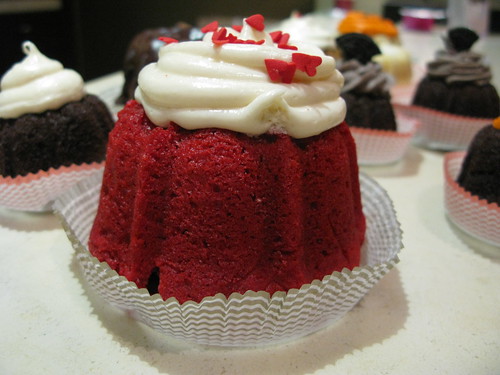 Are you so over cupcakes? Too sweet for you? You may want to give bundt cakes a try. Stop laughing. I tried them at the newish bakery, Kiss My Bundt, in Midcity and was pleasantly surprised because 1) they are available in teeny tiny cupcake-size bundts rather than not-so-cute bundt cake slices, 2) they aren’t uber sweet, making them a perfect coffee complement and 3) the small bundts are pleasantly cheaper than most cupcakes out there.

Owner Chrysta Wilson originally started out with a cake catering company but the popularity of her bundts caused her to launch this bakery in August of this year. And word of mouth has been good judging by Yelp reviews and the number of emails I get from people asking me to check it out.

The store itself seems familiar in that it’s similar to a lot of the cupcakeries I frequent, what with the girly interior, the daily flavors (eight every day) and miscellaneous flavors. But the bundts distinguish themselves from cupcakes in texture (springy) and flavor and, let’s face it, they’re not as pretty pretty.

But at least it’s feasible to have some of the bundts with your morning coffee, whereas a cupcake for breakfast would be, well, insane. I recommend the Luscious Lemon Drop with lemon glaze or the pumpkin cake with the cinnamon spice glaze. Mmm!

According to Chrysta, her chocolate-loving customers are fans of the chocolate cake dipped in chocolate and the cookies and cream bundt (chocolate cake with Oreo cookie buttercream). I tried both and found that they were surprisingly subtle, not over-the-top chocolatey or sweet.

If you don’t want to commit to one of the huge Big Ol’ Bundt Cakes ($32 and must be preordered), you can opt between the $2.50 Mini Bundts, which are the size of a small cupcake, or the $4.50 Baby Bundts, which are larger than the average cupcake.

Unfortunately your purchases can’t be enjoyed in the bakery at the moment thanks to some meanie watchdog neighborhood association that apparently wants to keep this an order-only operation. Boo. That’s why the cafe tables and chairs are tucked away and there’s a sign that says you can only sit on the couch to wait for your order. But you can get your goodies boxed up to go.

So, yeah, if you’re looking to surprise and delight your fellow bridal shower attendees or housewarmed hostess, bundts are the way to go. However, we’re still skeptical about them completely replacing cupcakes at birthday parties. Not cute enough, ya see.