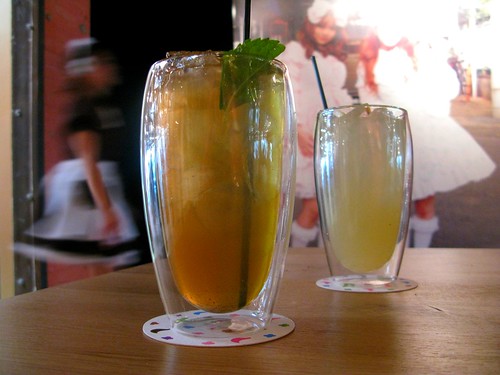 When I first heard about Royal/T Cafe in Culver City I was instantly creeped out. The focal point of all the publications that covered this cosplay teahouse was the servers dressed up in maid costumes. Was this a place for guys to have their French maid fantasies realized (minus the sex)? Ehh, I’ll pass. 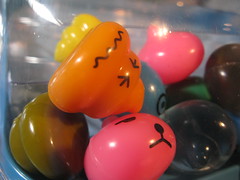 City. We had just finished a bland, uber healthy breakfast at M Cafe when I had remembered passing the kawaii cafe on my drive in to town. Since neither of us had been there before we decided to walk on over and check it out.

On a Saturday afternoon, the place seemed quiet. The arty stores selling t-shirts and toys out front were empty but the tearoom further in was buzzing. Almost all the tables were taken by tea-sipping patrons. But just as well since we were still too full from breakfast to consider a tea service.

We were about to just order something to go when the owner of the place, Susan Hancock, said that we were welcome to sit down at the picnic table past the tea room; apparently her favorite place to sit. And we could instantly see why. It had a huge table perfect for a party of eight or for community seating, and it was surrounded by art. Huge portraits of Harajuku girls and a collection of ceramics affixed with googly eyes, a light box on the floor that asked you not to stand on it, etc. 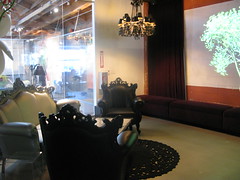 Just past this open room was a closed-off room furnished with salon couches and a huge TV screen that Susan said could be used to display whatever the party-goers want — family videos, Breakfast At Tiffany’s, slideshows. The best part is that it’s just $100 to throw a private party there, 20-person max but no minimum on food. PLUS she said guests were allowed to BYOB! Such a deal.

She also mentioned that she’s currently trying to get a liquor license for the place, hopefully within the next six weeks, but even then people could still BYOB to their private parties.

Susan seems like a really cool lady. She went on to tell us that she had always wanted to open a tea house and that when she got a divorce and her ex took their house in Malibu, she was stuck with a place too big for just her in NYC. So she sold that New York home, took her art and bought this place. The art on display, hers, is not for sale but guests are free to admire it all they want.

In the back was yet another room where guests could enjoy their tea, but when we were 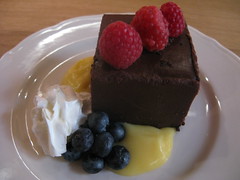 there it was closed off for a Mercedes-Benz fashion week media party. Boo. In any case, Shelley and I tried to come up with an excuse to throw a party in that smaller room.

As we dreamed up a party theme, we ordered a chocolate espresso cake to split and Shelley got the ginger lemonade while I chose an iced Moroccan Mint tea. Both were so refreshing and were served in those insulated Bodum glasses to keep them chilled and our hands warm.

The cake itself was thick, almost chocolate bar thick where the fork snapped against the plate with a loud clink! as we tried to break off a piece. The brick o’ cake was served with some lemon curd, blueberries and raspberries, so perfect with the richness and coffee bitterness of the dark chocolate. And our unsweetened beverages offered a delightful palate cleanser after the snack.

We were surprised by the Royal/T, that it was a lot more than the maids and it’s a place that we would definitely return to again. I can’t wait until Susan is able to extend the cafe hours. As it is the cafe is only open til 6pm Tuesday through Sunday. But til then we’ll definitely have to come back to try that high 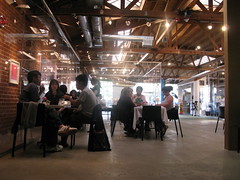 tea ($19.50) which includes your choice of tea with small pastries, mini quiche, egg salad, kappa maki, and California and spicy tuna finger sandwiches. Or perhaps just a simple lunch of ponzu salmon with pan-seared edamame in a rice bowl ($11). Mmmm!

BTW, if you’re still on the lookout for something interesting to do for Halloween, Royal/T will be throwing a Lolita-themed Halloween tea party on October 26 from 12 to 5pm where girls are invited to become living mannequins and pose for photographer Neil Sharum. So arty! Admission is free but it’s $25 for the tea and snacks.