Laurel Tavern: A Gastropub for the Dark Side 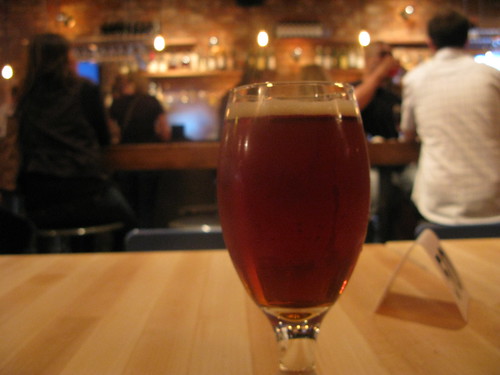 It seemed like everyone of my newsletters I subscribed to and blog I read made a mention about the debut of Laurel Tavern, the gastropub in Studio City, this week.

Eater LA: “As one commenter put when we tipped you off last week, it sounds like the York, Village Idiot and the Other Room all rolled into one, but that’s kind of OK considering Studio City doesn’t have anything like 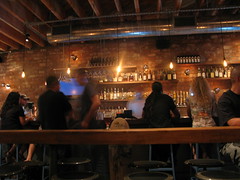 Rare Daily: “Refuel from all that shopping with a solid Tillamook cheddar burger and twice-fried steak fries at the just-opened Laurel Tavern. Wash it all down with an artisanal beer, cherry-picked by the Beer Chick herself, Christina Perozzi.”

The Guide: “Wood ceilings, spiral exposed aluminum ducting, windows that open up onto Ventura Blvd. and blue chairs that look like something out of a middle school cafeteria circa 1950 all conspire to make the experience here a classic.”

UrbanDaddy: “If a few of the menu items (Steak Fries in Pork Fat) look familiar, that’s probably because they are. One of the owners also operates Library Bar, which, as you know, just built a kitchen to serve a few of the same favorites you might find here.”

My review after the jump…

I shrugged it off. Another gastropub and in Studio City at that. Meh. But my friend John of

Social Domain said that he really really wanted to check it out instead of go to Musso & Frank’s as was our original plan for the evening. 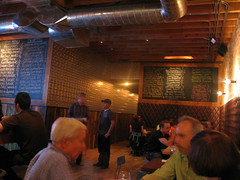 So I braved that horrendous 405 traffic and made my way there. Arriving at around 6, the warmly lit restaurant was buzzing but not packed as we were thankfully able to grab a butcher block table along the wall.

The center table with its metal chairs for those there to drink more than eat just didn’t look all that comfortable. After sitting for about five minutes watching the wait staff bus tables but not come around to us, we figured out that we were supposed to place our order at the bar.

But what to eat? The chalkboards on the wall told of three different burgers but didn’t list why they were different. We went up to the bar to ask for a menu but found there was only a thin stack of papers stapled together and it was the bar’s copy. I guess they don’t have menus yet since it just opened. 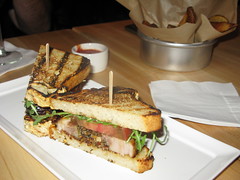 Thing was, I thought I was craving a burger but then I saw these and wasn’t really feeling ’em so I chose the pork belly sandwich ($10) which came with arugula, bread and butter pickles, heirloom tomatoes, garlic jam, cheese bread and thick slices of roast pork belly. I think it was the garlic jam that got me. We also ordered some peppered steak fries ($6) coated with hot pork fat, sea salt and pepper and served with hickory sauce.

The sandwich was OK. The thing is by the time it got to my table, along with the fries, it was kinda cold. Nothing like heat to make food taste extra savory. And that wasn’t the case here. And I didn’t really taste any garlic jam. I was also a bit disappointed that the steak fries didn’t taste strongly of the pork fat that was promised. Actually, John’s order was a little bit better than mine but not by much as he had just had these at the Library Bar (same owner) last week and said his order had come drenched in pork fat. Mmmm. Not so here. Again, we’ll just chalk this up to opening night. Maybe I’ll come back in three months. 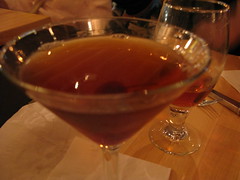 I love the fact that there’s a full bar here, so if for some reason you’re not in the mood for something from the awesome beer list, you can always order a Manhattan. Another thing that was interesting was that all the beers are on tap, and there are a lot of beers. No bottled beers here, no sirree. There’s my beloved Craftsman (four different types at the moment), North Coast Pranqster, and Anderson Valley Oatmeal Stout to name a few. All only $5-$6!

I consider it a good sign when a place has Craftsman because Mark Jilg, owner of the brewery, only supplies his beer to establishments that take beer seriously, meaning the bartenders have to be well schooled in it. So yeah, the beer was good (Craftsman Oktoberfest yummm) and my Maker’s Manhattan following that was decent.

So Laurel Tavern is nice enough but honestly I wouldn’t cross into the dark side for it when there are plenty of gastropubs like it or better that are more readily accessible to me, i.e. downtown’s Library Bar, L.A.’s Father’s Office, The Bowery in Hollywood. But for the fine folks in Studio City and surrounding environs, here you go.