Me and a bunch of bloggers were invited to the Ritz-Carlton Residences sales room downtown earlier this week to check out the new, impending L.A. Live, the huge downtown entertainment project which was kicked off by the debut of the Nokia Theatre last year.

We (i.e. LAist, Blog Downtown, Experience LA, 5th and Spring and The Delicious Life to name a few) were fed fancy nosh created by Wolfgang Puck (carving station included!), treated to an open bar, allowed to romp around in the residences’ “model vignettes” and were invited to blog on the spot via a WiFi connection.

We were taken on a tour of L.A. Live in miniature before being shown a slick video about the project followed by a short fieldtrip to the Nokia Plaza where we were told how and where things 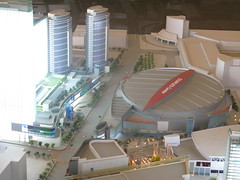 would be. We listened skeptically about the grand plans to draw Angelenos to the city’s center for sports events, concerts, dinner, movies and even New Year’s Eve.

They didn’t want this to be for the tourists but a destination for the natives. And they’d entice us from every SoCal locale, from the Historic Core to the Inland Empire, with a 14-screen Regal Cinemas movie theater, 12 restaurants, Club Nokia (a 2,300-person venue), the Conga Room, Lucky Strike Lanes, ESPN Zone and ESPN West Coast Broadcast headquarters, the Grammy Museum, in addition to the Ritz-Carlton Hotel and Residences.

And none of the bars were all that intriguing to me (Trader Vic’s included). I mean, the Rock’N Fish serves a chocolate-covered banana cocktail fer crissakes. I’m thinking the Edison needs to add a junior location. 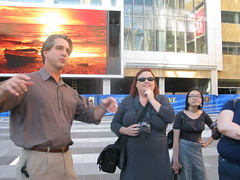 But of course my first question was, “What’s the parking situation?” Because I know that’s my big issue when coming downtown. Even as it is, I choose street parking over the expensive Staples Center garages.

Apparently the plan is to create 3,500 parking spots (to add to the already existing Staples and convention center garages and the surrounding lots) which are divided into a section for the restaurants, movie theater and clubs and another section for the big venues. Anticipated flat rate for the former is $10 on weekend nights. And there’s a plan to have Dash shuttles on weekends as well.

For those who don’t want to deal with parking or the massive traffic this entertainment center is sure to draw, there’s always the Metro. A Gold Line station is located a couple of blocks from Nokia Plaza.

We bloggers stood in the plaza while the Ritz-Carlton developer described where everything was going to go. “There’s no way you can fit everyone in here for New Year’s,” said LAist’s Elise as we tried to imagine a sea of Angelenos counting down in the space between the Staples and Nokia. No way, indeed. 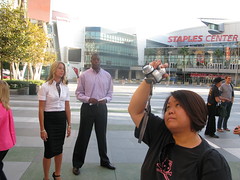 The man brought up the point that crowds are always an issue for Times Square during New Year’s. True, but doesn’t Times Square have a bunch of metro stations in the vicinity? And even then, since this is a new project, couldn’t measures be taken before development is completed to make it more accessible and crowd friendly? No one asked those questions out loud, though, as we were busy taking everything in…and taking lots of pictures.

So the plan is to open the restaurants and nightclubs later this year while the Ritz, Regal Cinemas and the Marriott will debut in 2010 (L.A. Live’s final phase).

After the outdoor presentation, we returned to the Ritz salesroom where we resumed the party with more eating and drinking. Lindsay, Elise and Andy from LAist as well as Sarah from The Delicious Life and I went over to the Residences’ bedroom replica to goof off, posing in pictures evocative of a very luxurious blogger lifestyle. The joke being that none of us could ever afford to live at the Ritz. One hundred of us in one condo, maybe. But one blogger? No way.

“It’s very mean of them to show us this place when it’s not something we could ever afford,” I complained to Sarah. “I know! They should have a resident blogger!” she said excitedly. 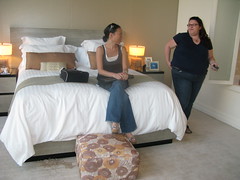 Sarah went on to admire the Juicy Couture-esque Lakers handbag on the nightstand while Elise had food served to her whilst sitting in the deep bathtub and Andy accidently spilled Sarah’s vodka soda at the foot of the bed. Later we all Twittered during yet another presentation.

As for what I think of this entertainment center. I’m still very skeptical. It sounds like quite a lot in a small, congested space and that’s just not appealing to me. Add to the fact that these are restaurants that I couldn’t afford to patronize and neither would I brave traffic just to see a movie here.

Despite what the developers said, I can see L.A. Live drawing in a lot of tourists; people who want to be in L.A.’s center and experience all that flash in one place. This is another Hollywood and Highland, another Universal City Walk. If you like those places, you’ll be thrilled.
<a target="_blank"href=“https://www.flickr.com/photos/caroscuro/sets/72157607808902344/">
Flicker Set of L.A. Live blogger party.