I’ve never really been disappointed in chocolate before. Well, except Hershey’s Special Dark. But I wasn’t all that happy about the 2nd Annual Los Angeles Luxury Chocolate Salon yesterday in Pasadena. The thing is, I had a press pass so didn’t have to pay the $17.50 admission but I felt really bad for those who did pay it, like my friend Esther. 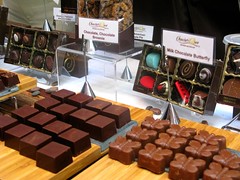 We were under the impression that we’d be able to gorge our greedy selves on all the chocolate and wine that we could stand. But when we got there and ran into LAisters Elise and Lindsay, who happened to be one of the judges on the tasting panel, they told us that some of the vendors had already run out of samples since many of them thought this was a tradeshow where they would be selling their wares, not giving them out for tastings. And the anticipated crowd of 500 had doubled to over 1,000 chocoholics.

Needless to say the samples were eensy weensy and there were some folks who weren’t giving samples out at all while others were very stingy with theirs, keeping their sample dishes near them and out of the easy reach of passers-by. But just as well as we got extremely wired off the few we were able to try.

As for the wine tasting, Elise had said that “the wine lady is mean” so I made sure to stay away from there. Yes, there was only one wine tasting table and even then it wasn’t all that busy. I guess word got out.

There was, however, a man from Vermeer Dutch Chocolate Cream liqueur giving out samples of the drink in tiny cups. But 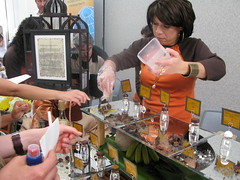 when he heard that me, Esther and Elise were bloggers, he handed us little bottles of the stuff. Neat! I made sure to take a picture of Vermeer’s cocktail list so that I’d have some recipes to play with later. I asked him why it was called Vermeer and he said that it came out the same time as The Girl With the Pearl Earring movie came out. That’s it. Not an intriguing answer but at least it’s a good liqueur.

We experienced a surreal moment when the Sacred Chocolate rainbow dude dressed a la Willy Wonka on ecstacy started making out with his scantily clad partner as we were walking up to their table to check out their organic raw samples. Um. No thanks. I’d rather not have skin and French kissing around my food.

My favorite chocolates of the day were:

After about an hour or so, Esther and I, and the other bloggers we ran into (HC, Delicious Life, Lindsay and Elise) were done. Sweaty, wired and tired, we were craving some actual food and decided to go across the street to the mall to check out a restaurant. THAT was the best part of the day.

I heard last year’s chocolate salon, although not as crowded, was at least better in that the samples were bigger and more numerous. I’m not sure what happened with this one but word has it that next year the event planner is looking to expand this to take over the other rooms of the not-too-attractive Pasadena Conference Center. Hopefully, next time the vendors will return giving attendees their money’s worth.

Someone had brought up the point that we shouldn’t have expected anything more for the price of the event (last year’s Dessert Decadence was $60 and had 13 food vendors and 15 wineries), but if that’s the case “small samples and one winery” probably should have been reflected in the advertising.