Pigging Out at the 26th Annual American Wine & Food Festival

How much do you think you can eat before you say, “Uncle”? I found out my limit at Wolfgang Puck’s 26th Annual American Wine & Food Festival held on the Universal Studios backlot over the weekend. Sure, the ticket for the highly successful shindig was $300 but 1) it’s for a good cause (raising over $14 million for the L.A. chapters of Meals on Wheels since 1982) and 2) it’s all you can eat and drink from the finest food and wine/spirits purveyors for five hours. 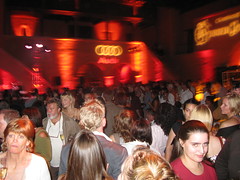 Fortunately I was able to score press passes for me and my foodie/wino friend, Beth, who basically died and went to heaven as soon as we jumped on the tram to the event. I was really glad she agreed to be my guest as she’s tons of fun to hang out with plus she, too, is a big fan of all that is yummy.

Beth’s also pretty easy-going and only requested that we stop by Sam Choy‘s table so that he could autograph her copy of his cookbook, which is one of the first things that we did. That, and get a picture of him.

Unfortunately, we weren’t given a map of the event when we arrived so basically had to explore on our own. It probably would have saved us time if we knew where everything was and all that was there, but reading the big restaurant signs and menus at each table helped a bit. In any case we’d simply peek at what was being served and then check out whether the line was too long to determine if it was something we wanted to try.

Our favorites were Sam Choy’s coconut soup and fish sandwiches, Wakiya Ichiemicharo’s lobster sweet taoban with lemon sauce and this (sorry, I don’t remember where it’s from!). 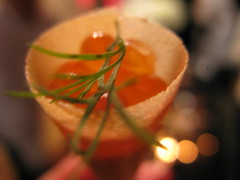 Some lines were too long and slow-moving to bother with but most moved fairly quick. That was primarily the food lines. However, all the booze and wine tables usually had little-to-no wait. Either that or I just didn’t mind standing in line for the different cocktails.

Beth loves wine so she checked out the wineries while I made sure to sample the cocktails — Maker’s with gingerale, Leblon’s jalapeno and cucumber caipirinha, Belvedere Vodka’s Summer in the City cocktail, Patron Tequila’s mojito, kiwi litchi martini.

Since I’m not a big drinker and wanted to be able to negotiate the cobblestone streets without falling on my face, I kept my imbibing to a minimum. Just as well as I had hit my limit within the first two hours of the event. I could no longer drink OR eat as I was so stuffed that it hurt.

Beth’s enthusiasm, on the other hand, never faltered so we continued on. “Oooh! I want to try THAT!” she’d giggle. “OK, YOU can try it and I’ll just watch,” I’d reply. But then it got to the point 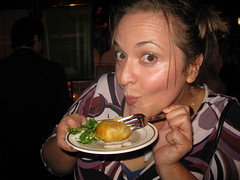 in my stuffed-itude that I couldn’t even listen to her describe how good the Malvarosa from the Cheese Store of Beverly Hills was. “Stop! I don’t want to hear it anymore!” I cried, erping a bit.

I think what did it was that I had polished off a chocolate and coconut sorbet and then tried to further stuff it down with some Compartes Chocolatier‘s fleur de sel caramel chocolates. Normally, YUM, but here? Blech.

After another hour or so, Beth’s stomach FINALLY caught up with mine. So we wheelbarrowed our burgeoning bellies to the line for Wolfgang Puck’s organic coffee and enjoyed a decaf cappuccino while sitting on the curb watching women in high heels delicately walk the cobblestone. One actually fell down! Score! Uh, I mean, that’s not nice.

At 10:30 it seemed like everyone was closing down. Just as well as we were soo done, too.

I had attended last year’s AWFF and even though this year’s dessert lounge wasn’t as impressive (meh cupcakes and no circus folk) and there weren’t as many food booths, I had wayyy more fun. I’d say it had a lot to do with the company.