Walking With Dinosaurs: The Live Experience

If you were big into dinosaurs when you were a kid, or even as an adult, I’m guessing you’ll get a kick out of the Walking With Dinosaurs show playing at the Staples Center this weekend. Even though I’m not exactly a dinophile, I checked out the show last night after having watched the making of it on TV. Seventeen man-made dinosaurs, all “life-size” and walking around on stage, interacting with one another. That part was pretty cool. The narrator/paleontologist took us through the different dino periods (Triassic, Jurassic and Cretaceous), explaining which animal was what, etc. 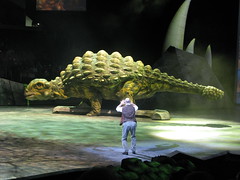 Now, although I can appreciate the stage interpretation of these massive creatures and their environment and the great amount of work that went into making everything, I was meh about the show while watching it. I blame that on Jurassic Park and even the TV series of Walking With Dinosaurs. After seeing what can be done with computer graphics to replicate what these animals must have looked like and sounded like and even killed like, the live action was kinda, well, not boring, but only mildly amusing. There were a couple of dinosaur battles but of course no clashes which could end in a bloody mess. These were very expensive animatronic dinosaurs and couldn’t be damaged.

But I imagined if this show was around when I was a kid, I definitely would have pee’d in my pants seeing these dinosaurs in action. They moved and roared; yes, the animals roared themselves, it didn’t come from the sound system speakers. The eyes blinked and were expressive, like when the giant 36-foot-high brachiosaurus cuddled with its baby and closed its eyes in contentment. Awww. Flowers and foliage popped up from the ground and it “rained” in the Staples Center as well as “flamed” up during the many fires of those early days. We even took to the skies with the ornithocheirus. 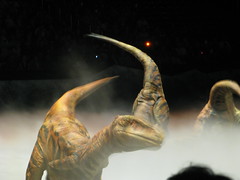 The star of the show, well at least judging by the screams and cheers it drew, was of course the Tyrannosaurus Rex. Funnily enough, David Markland of LA Metblogs and Creepyla.com told me that the T Rex was played by Creepyla.com writer and apparently “badass Sarah Palin impersonator,” Jessica Chisum. When the T Rex started snapping at the other dinosaurs, I couldn’t help but giggle and think, “That’s a good Palin impression. Heh.”

Anyway, yeah, I’d suggest going to this if you know some kids who are dinosaur fanatics or if you are just THAT into dinosaurs. Tickets range from $26-$79.50 but as a special through September 28 you can save $3 per ticket when you get a group of friends of 10 or more together and purchase tickets.