Savor the Season: Getting Stuffed to the Gills 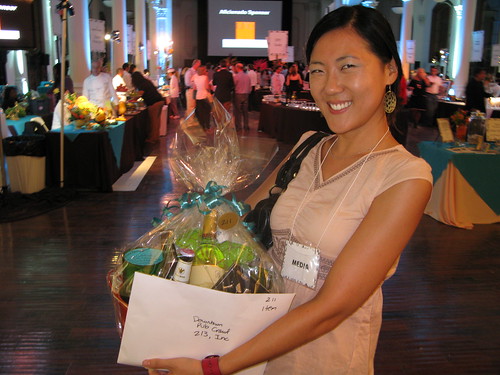 That’s my friend Shelley who had put a winning bid on a downtown pub crawl at Savor the Season’s silent auction Sunday night. Shelley thought it would be funny if she won the auction and dragged me along. “Funny” because the company sponsoring the pub crawl is the same one that had banned me from their bars. “They can’t kick you out if you go cuz we won this auction,” Shelley said. 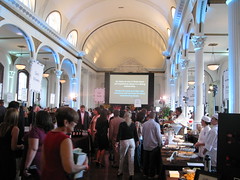 In all honesty, I just don’t care to go but then again, what kind of person would I be if I turned down a free drink? I’m torn. In any case, she thought her winning bid of $110 was a good deal considering the prize’s value was $140 for four drinks (wine, beer or well cocktail) at four different bars (that’s four drinks a bar) as well as a gift basket of two beers, a bottle of wine, appetizer picks and plates.

In any case that was the piece de resistance of our night at Savor the Season, a food festival to benefit the charity Break the Cycle. Shelley and I enjoyed the food and drink from some of the top restaurants and food purveyors in L.A. The portions were appetizer size but there were many and the lines were nonexistent so it was easy to go back for seconds, thirds and fourths as the case may be. Plus they had passed appetizers on top of it all! 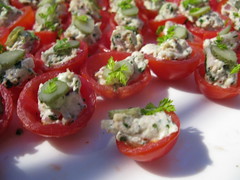 and finish off with Tutti Gelati’s gelato topped with balsamic vinegar with strawberries. A very well-organized event. I was just happy that it wasn’t crazy crowded and everything was accessible.

The only thing that was a bother was that it got kinda hot in this old downtown cathedral-turned-event-space, Vibiana, and there really wasn’t anywhere for the general admission crowd to sit, just lots of tall tables that they could stand next to and enjoy their eats.

That didn’t stop me from enjoying the eats. My faves of the night were of course mostly sweets and cocktails:

There was also a VIP Lounge and Tasting Garden where those who forked over $250 could enjoy the goods from Andrew’s Cheese Shop, Beverly Hills Caviar, Saltistry and Madame Chocolate to name a few.

Yes, a very fulfilling night. And at $100, it’s one of the more affordable food festivals considering all that you get.

More pictures from Savor the Season.