Millions of Milkshakes: My God, It's Full of Toppings 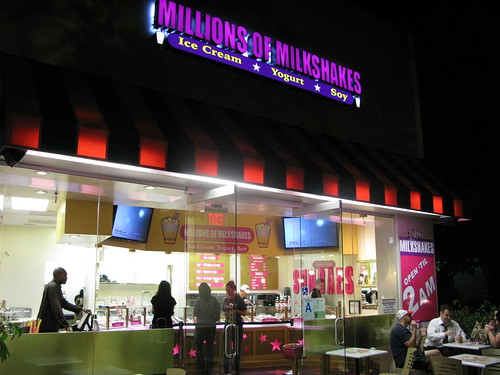 Ever since I saw the signage on the West Hollywood storefront touting “The Britney Shake, The Paris Shake, The Lindsay Shake” I’ve been intrigued by Millions of Milkshakes, a shop dedicated only to that dairy delicacy. What’s this? Will they serve adult milkshakes, i.e. with liquor? What’s with the celebutard tie-in?

Apparently, the idea for MoM started off in London as a 24-hour Hollywood theme diner which served milkshakes and food. Sheeraz Hasan, owner of MoM, wanted to bring his idea for a milkshake bar to L.A. So there we have it. 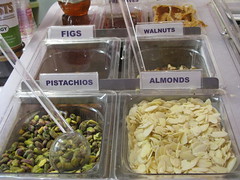 MoM has already been open for three weeks now and I was FINALLY able to swing by. The store was brightly lit and sported signs galore. “Milkshakes!” “Sundaes!” “Open til 2am!” but no actual menus. There were directions at the start of the line where a helpful…milkshake guide (?) took our order asking us if we wanted 1) a milkshake or sundae; 2) ice cream, soy or yogurt; and 3) which toppings/ingredients.

Sounds simple enough until you see the bazillion types of toppings you have to choose from; nuts, candies, fruit, cookies, cereal, sauces, and even boosts…ay yi yi. Bazooka bubblegum? In a milkshake?!

Normally I wouldn’t complain about having so many options but I couldn’t help but feel overwhelmed. “The first topping is free and then it’s 95 cents for each additional topping,” the guide said, trying to be helpful. I just continued to stand there and stare at all the toppings.

Finally I asked if they perhaps had their own menu of combinations that they suggested to the confused. “We do, but since we just opened, it’s not up yet,” he replied and then handed me a stapled bunch of papers which had the 17 top milkshake combinations (none of which were named after Lindsay), 8 most wanted sundaes, and 6 smoothies suggestions as well as a list of all their toppings/ingredients. He said the signage for this menu will go up this Monday. 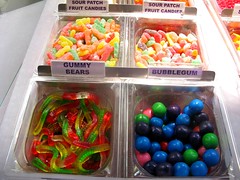 Scanning the offerings, I couldn’t help but wonder how they came up with these combinations. A lot of them were chunky and therefore sounded really difficult to suck through a straw. Sure, they equipped you with one of those fat boba-sucking straws but boba are soft. Skittles, Starburst and Snickers are not.

And some of the combinations didn’t seem to have any rhyme or reason, like The Mind Blower, which is honey, Trix, Reeses Peanut Butter cups, Almond Roca, strawberries, banana and hot fudge. Wuut?

And the Candy Land shake sounded like it could do some serious damage to your esophagus what with Skittles, Starburst, licorice, Sour Patch and jelly beans. That stuff gets hard in cold ice cream.

So even with the menu in my hand, I STILL didn’t know what I wanted. But I finally settled on the Dirty Shake: marshmallows, chocolate powder and almonds. It sounded like the simplest of the bunch. FYI, the base dairy (soy, yogurt, ice cream) only comes in vanilla, thus the chocolate powder was needed if I wanted my chocolate shake. “What’s a popular shake?” I asked the guide. “The Dirty Shake is a good one…wait, what’s in it?” he asked, taking the menu back from me. I guess they are still getting their bearings.

Anyway, here are some of the interesting offerings:

Since my bf paid for the milkshake, I don’t know the exact cost but only that it was “$5 for a milkshake?” 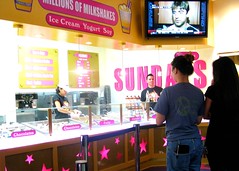 While we waited for the creation of my shake, we chatted up the cashier. He said how they always get a line of people out the door late at night, which sounded hard to believe considering the last thing I want after a night of drinking is a thick milkshake. But then again that could just be me.

Anyway, he said they’re working on extending their hours from 2am to 3am. Since they’re located right in Boys’ Town and near all the gay bars, they usually get a lot of people knocking on their glass doors after last call.

After we picked up my Dirty Shake sans whip cream, I wandered over to the nearby counter that had a bunch of shakers featuring even more stuff that I could possibly add to my shake, like pumpkin pie spice and yerba mate. Pass.

The cashier saw me pondering the shakers and said, “You know, there are people who like to add balsamic vinegar to their shake.” At first I cringed at the thought but then remembered how Italians like mixing strawberries with balsamic vinegar, even topping their ice cream with the mixture. Hmm, I wonder how that would do as a shake? I guess if I’m daring enough, I’ll try it next time I visit. 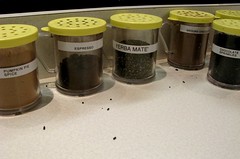 So how was my shake, you ask? Ummm, I’ve had better, especially for that price. But, still, it made me happy. It IS a milkshake after all. Yes, I would have liked it more chocolate-y and I couldn’t really taste the marshmallows but I did have a hint of the almonds’ crunchiness.

BTW, MoM’s Web site says it’s going to have a grand opening party on Halloween. It’s not clear what that entails but maybe if you’re out and about for the WeHo Halloween Carnival, you might want to peek in.