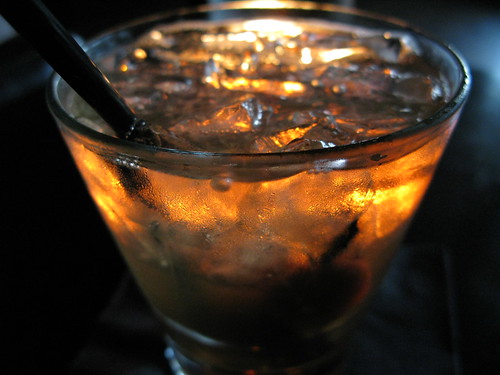 It’s easy to take places for granted after they’ve been around for several years but when I heard that Wilshire Restaurant in Santa Monica was sporting a new cocktail menu AND dessert menu I had to revisit it. 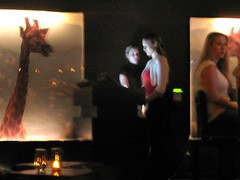 Newish bar chef, Mark Sandstrom, is formerly from Voda (now closed) in Santa Monica, which explains why six out of the eight cocktails on the list are vodka-based. He also is big on shopping for fresh cocktail ingredients at the local farmer’s market every Wednesday. Thus his concoctions all feature fresh fruit and herbs and therefore may make you feel a little bit better about forking over $15 for a cocktail.

Fortunately Mr. Sandstrom was good enough to include a bourbon cocktail, called the Casablanca ($15). Made of Maker’s Mark, elderflower liqueur and soda and then garnished with organic khadrawy dates, this is the perfect cocktail for the bourbon virgin as it is very very light. In fact I tasted the elderflower liqueur more than the bourbon much to my dismay.

But still it would be a good whiskey cocktail if you want something innocuous-tasting. I’d suggest drinking it right away, though, as I had made the mistake of letting mine sit, and the melted ice washed away any bourbon taste that had remained. I wonder if this drink would be better if it were served neat. Hm. Then again, I do like my cocktails strong. Mmm, Manhattans.

For dessert, we were presented a list created by newish pastry chef, Jennifer Shen, formerly of Spago. Two goodies in particular caught my eye: 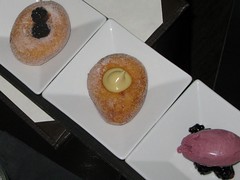 But since the soufflé required some time to make, we ordered the doughnuts ($9) instead, which were sugar doughnuts served with blackberry compote, honey cream and a dollop of blackberry ice cream. These were OK. It was two doughnuts and that ice cream. And although the doughnuts were definitely worlds better than any Winchells I’ve encountered in the past, the cheapskate in me wasn’t comfortable paying that much for doughnuts.

The Birthday Cake was a dollar less and seemed like a dessert bargain in comparison. She — I’ll refer to her as a “she” cuz she was so purty — arrived on a plate with some lemon cream graffiti. A little flower wand was sticking out of her, I guess an artistic interpretation of a candle. I couldn’t help but think how much cooler it would have been had it been a real birthday candle. Ah well, the cake itself was soo yummy. Light lemon flavor with the fresh raspberries made me think of summer. The creamy ice cream complemented the texture and taste of the cake nicely, as it usually does. Lovely. 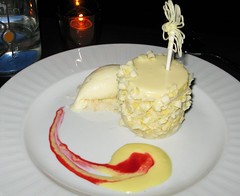 I don’t know how much longer she will remain on the dessert menu, though, as word has it that the menu is going to be changed next week.

In any case, Wilshire is a bit pricey for my wallet. Even the happy hour isn’t as happy as I’d like with $7 well drinks and $8-$13 bar specials. However, to be fair the food specials were fancy fare like kobe beef sliders and Chimay Ale marinated skirt steak.

If money isn’t an issue for you then you’ll enjoy what this Santa Monica restaurant with its new menus has to offer. But if you’re a cheapskate like me, you’ll probably want to save this restaurant for special occasions, hot dates when he’s paying or an expensed lunch/dinner/cocktail hour.