Take a Bao: Pork Buns All Fancified and Healthy 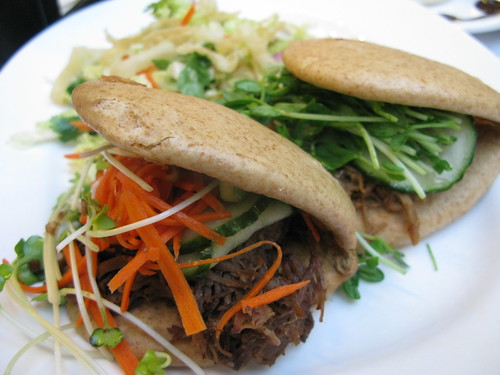 When I was a kid growing up in Northern California, one of the things I loved to do with my folks was go to Chinatown in San Francisco. The ‘rents always liked stopping by the various shops to pick up goodies, like those jelly sponge cake thingies, dumplings and baos. So the kid in me was delighted and intrigued when I first heard about Take a Bao opening up in the fancified food court of Century City Mall.

Frankly, even though that food court is the fanciest mall eating area I’ve ever seen, I wasn’t crazy about any of its choices: Fuddruckers, Lawry’s Carvery, California Crisp, meh. So a reasonably priced Pan-Asian eatery there sounded just swell. And baos at that? I’m all over it.

I went there Monday night and even though the rest of the food court was pretty dead, there was a buzz at the bao counter which is located in the center of the large room. An actual line of about 5-8 people from suits to sophisticates had formed, a long line considering it was a slow night.

But the queue moved steadily as the two 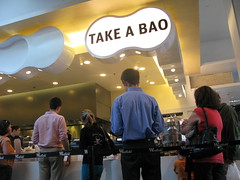 cashiers kept it going, plus the menus handy at the line entrance made sure that people could decide what they wanted to order BEFORE they reached the front of the line.

Studying the menu I saw that customers could either order the two-bao plate with a side salad, a bowl of bao fillings without the “bun,” noodles or salads. Out of the eight choices of bao flavors — from pomegranate-glazed skirt steak to spicy sesame citrus chicken — I chose the “signature” bbq pork and the miso beef. Funny thing is that you can actually order wheat “buns” or have them wrapped in lettuce leaves. So L.A. heh. But yeah, I ordered the wheat bun.

The menu also showed off a selection of beer, wine and sake but unfortunately I came to find out that since they just opened they still didn’t have liquor. Wuuut? That sucks. Sapporo (draft $4.50) would have been perfect right about now. OK, they did have Stewart’s and Boylan’s sodas and a house-brewed iced tea of organic plumberry black or organic green mystique, but I just settled on tap.

For dessert, I couldn’t resist the Take a S’More goody ($1.95) — chocolate, marshmallow and graham cracker in a sweet bun. Awesome.

After I placed my order I grabbed a seat nearby so I could hear when they called my name. A baby in a stroller at the table behind me started shrieking while its mom looked on. A herd of rugrats ran around the dining tables, squealing and scurrying. Ugh. Malls. 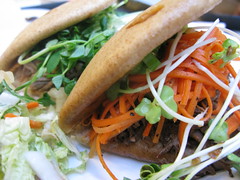 Finally my name was called and I was given a tray with a plate of two taco-looking things. Weird! So it’s not really a “bun” per se. The shell looked like it was made of the same material as usual Chinese buns, though. And with the carrots topping the miso beef bun and the pea shoots on the bbq pork bun, they did look like Asian tacos. For some reason, this didn’t inspire bao lust in me. But I was a-starved so I dug in.

Although, the meal effectively sated my hunger, I was a bit disappointed that the baos didn’t possess any of the sauciness of the Chinatown buns. I blame it on the restaurant’s apparent effort to try and be “healthy.” Booo! It tasted dry and non-savory! There was some sweet chili sauce available near where you get the utensils and napkins but I didn’t want to mix that with the flavors of my baos.

Because of the lack of sauce, the baos weren’t as yummy as the genuine stuff. The pork in the bbq bao was shredded, reminding me of a pulled pork sandwich. Not that that’s bad. The miso beef even though listed as being braised was also not that savory.

Next up was the smores bun. It arrived on a plate with a swirly trail of chocolate syrup around it. But the sauce reminded me of Hershey syrup or the kinda store-bought stuff we put on ice cream sundaes at home. But I still enjoyed the toasted marshmallow and 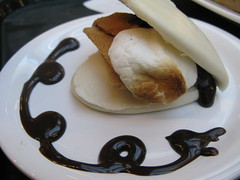 the graham crackers wrapped in the taco thing. That sweet bun wasn’t all that sweet. In fact it just tasted like the regular white bun but whatev, costing only a couple of bucks, it hit the spot.

BTW, my friend Tiny Nancer ordered the Asian ice cream sandwich ($2.25) for dessert and was extremely disappointed. It was a prepackaged deal made of vanilla ice cream sandwiched between chocolate-lined waffle bars. She whimpered a bit as she saw me munch my smores dessert as she tentatively bit into her soft sandwich.

Apparently the waffle bars weren’t even crunchy but rather wilty. And the ice cream didn’t look creamy. “This costs more than your smores!” Nancer complained. “So why don’t you exchange it?” I asked. “Well, I already took a bite out of it.” We both looked at the perfect bite she had taken out of the bar. Ah well. I tried not to say “mmm” while I continued eating for fear of making her feel bad…but I couldn’t help it.

So the bao place was only disappointing to me because I’ve had experience with some authentic varieties. I think for people not familiar with what a genuine pork bun tastes like and used to the fare of food courts, would be pleased with this addition to the Century City Mall. If anything, it’s a cheaper alternative to Pan-Asian restaurant Rock Sugar, located at the other end of the mall, and probably the best of the food court offerings. I’d add it to my very short list of possible pre-movie eateries at the mall.