My Misadventures in Buying a Vespa

Remember a long time ago when I won that Vespa from ThisNext? Well, three months later, I finally got it! Woo. H’yeah, that lonnnng delay wasn’t the fault of ThisNext or because I chickened out from trying to get my motorcycle license or anything like that. It was because the Marina del rey Vespa dealership I was dealing with was a huge pain in the ass.

Long story a bit shorter: I had that winning gift card for a Vespa LX 50 but wanted to use it toward getting a bigger engine LX 150. The gift card was only good for this dealership so it wasn’t like I could shop around at other dealerships and use the whole “I’m going to take my business elsewhere” as leverage. So they kept giving me the runaround, not calling me when they got a new shipment in, etc.

But last Friday, frustrated after not hearing back from them for a month (I wanted my 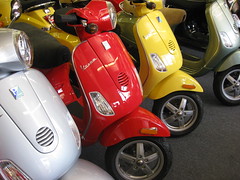 Vespa dammit and summer was ebbing away!), I called posing as a customer shopping for Vespas. “Sure! We just got a new shipment in and we have these colors…” (started naming the colors I was looking for), said “Carl” the salesman. WTF? That’s when I blew my cover and asked him why no one called me to tell me the Vespa in the color I wanted was in. I had left my name and number with three different salesmen since June, including the sales manager.

“Carl” said he’d help me out but he was very pushy as he kept trying to get me to put a credit card number down and I hadn’t even seen the scoot in person! He also used that sales tactic of “You better buy it now cuz these things are selling fast. They’re very popular.” Duude, don’t even try that with me. So I asked him what the out-the-door cost for the Capri Blue 2009 Vespa LX 150 was. He quoted me a price that was $2,000 over the MSRP.

“Hm, can you give me a breakdown of the costs?” I asked. He sounded annoyed but then listed off a bunch of costs. I wrote everything down so I could look at it when I got off the phone with him.

Yeah, the destination/freight charge is crazy considering a Maserati GranTurismo costs $563 more to ship and that’s a whole $100,000 car that weighs over 4,000 pounds! So I decided to call other dealerships to comparison shop. I tried Sherman Oaks and Riverside, both quoted me slightly lower prices but the salesmen were “car salesman” aggressive. 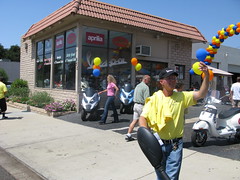 My last call was to Vespa Thousand Oaks. Owner David Meyer answered the phone. I liked him right away. He wasn’t pushy nor sleazy like the other salesmen I dealt with. AND he quoted me a really fair out-the-door price, plus he said that they’d ship me the scooter at no extra charge to my home in West L.A. — 33 miles away! (They don’t do that at MDR; even for the lousy 10 miles.)

I told him my dilemma, that I was bound to the MDR dealership because of the gift card but I really wanted to do business with his dealership. (Apparently they have lots of repeat customers, ample positive online customer reviews and scooter group rides!)

David knew he couldn’t get me out of my gift card situation, and at this point ThisNext couldn’t either as the MDR sales manager had no intention of cashing it out. I was stuck. So David called the MDR sales manager up. Apparently, they knew each other pretty well. Ya see, Vespa Thousand Oaks is one of the top five Vespa dealerships in the country (No. 1 in June) and therefore they get more stock than the MDR store. Sometimes they even send some scoots MDR’s way. 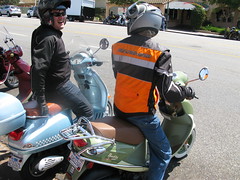 but he assured me that since that guy now knows that “big brother is watching” that it would be in his interest to treat me fairly. He got MDR to agree to sell me that Capri Blue LX 150 at the same price he had quoted me!

Unfortunately for you, this story isn’t quite over. When I went to pick up my bike on Saturday, the salesman at MDR gave me a cursory run-through of the Vespa’s features, i.e. how to start it, put it on the kickstand, etc. The gas tank was only a quarter tank full. “You guys don’t fill up the tank?” I asked the guy. “We fill it at about half a tank,” he replied. “But that’s only a quarter tank.” “Well, we gave you enough to get you to the gas station.” Wuuut?

This experience differed from when I went to the Thousand Oaks dealership later that day to check out their 2nd anniversary party and one of the guys gave me a run-through after I told him I didn’t even know how to put the bike up on its kickstand. (Apparently it helps to hold the rear brake while the toes of your foot face the rear of the bike; and then you step on the stand like you’re going upstairs.) 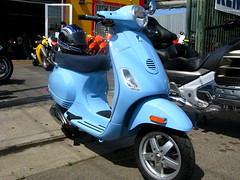 Yes, lots of important info like how to fill up the tank, how to lock the bike, what to do if I lose my key, when to take the bike in for its first oil change, what the break-in period for the tires are, etc. were all omitted from my orientation at MDR. Sheesh!

I just chalked up this lack of knowledge to the fact that the MDR dealer also sells ATVs, dirt bikes and sport bikes. And to buy a scoot from them is like trying to buy a great running shoe from Big 5 instead of a specialized running store. BTW, Thousand Oaks does start you off with a full tank of gas.

Ah well. Even though I didn’t technically buy my scoot from Thousand Oaks, they said they considered me one of their customers. And even though I couldn’t participate in their anniversary group ride this year because I don’t have my motorcycle license yet, I’m definitely going to be there next year. And yay! I finally got my Vespa. Anyone want to be in my scooter gang?