Kayaking in the LBC: Kayaks on the Water 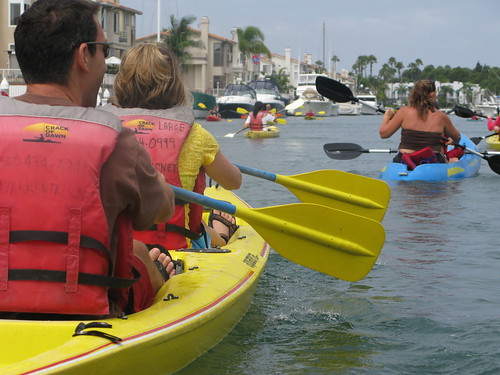 What better way to spend Labor Day than kayaking around Long Beach? It’s so fun and fairly cheap. And I was surprised that there weren’t many people there on this holiday. Guess they were scared away by the gloom of gray clouds and the sprinkles. Wimps!

We weren’t, though, and showed up at

Kayaks on the Water‘s stand on the beach in Alamitos Bay at 11am. No reservations needed. There was a small line but we moved through it pretty quickly, only needing to sign some waiver and hand over our driver license or keys (only one member from your group has to do this). We also had to assure the guy at the counter that we knew how to swim. 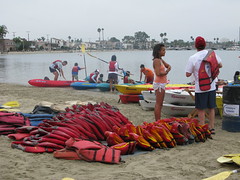 After grabbing a couple of Zip-Loc bags in which to put our wallets and cameras, we were directed to an area on the beach to pick up our lifejackets and paddles. The lifejackets were still sorta wet and sandy from its recent use. Stupid me wore a lovely cotton summer dress instead of what I really should have worn: board shorts and a bathing suit.

Even though we were not allowed to swim in the bay, we still managed to get wet. The kayaks tend to collect a small pool of water where your ass is supposed to go so you end up sitting in it. Also, you tend to splash a lot when paddling, especially when you don’t really know what you’re doing.

By the time we got out of the kayaks to hit the Jamba Juice at the Marina Pacifica Mall (where you can dock for free btw), my nice dress was dragging-down drenched and I had wished that I was wearing bikini bottoms. Ew, water-logged underwear. Well I thought that since we weren’t going to go swimming that I was safe from getting wet. Yeah, I know. Dumb.

In any case, after our quick Jamba break we paddled over to a little cove where all the moonjellies — non-stinging jellyfish — gather. You can tell where this cove is because that’s where all the kayaks were gathered with kids and adults a 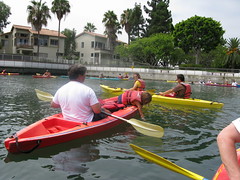 like staring into the waters and squealing. Some dodo kids lifted the jellies out of the water and we saw a couple of the poor lifeless jellies just floating on the surface. It’s all right to touch them, just don’t take them out of the water, children.

The moonjellies feel like those coconut jellies that my mom likes to use in Filipino dessert, but leave a slimy residue on your fingers. Still pretty cool though. If you sit still for awhile, you can see them below the surface. Apparently they only come up close to the surface when it’s calm so try to keep paddling to a minimum.

After we petted all the jellies we could, we headed back. A lot harder to do as you’re paddling against the wind. It would have been fine if this didn’t end up being a race. My bf kept trying to find the most efficient racing line to take back. I could feel my neck, shoulders and arms start to ache as I dug the paddles deep into the water to gain us some speed. It would have been nice to just float and enjoy the now sunny skies. There were more kayakers at this point and lots of boaters as well. 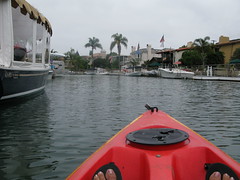 When we hit the shore we were directed back to the stand to pay. Yup, you only pay after you’re done. A double kayak, which I recommend to newbie kayakers so you can take turns paddling, costs $15 an hour and then is charged by the minute after. We were out there for just 2 hours and 10 minutes and only paid $32 for the two of us. FYI, single kayaks are $8 an hour.

I’d definitely love to do this again. Great workout! And it’s a fun activity to do with out-of-town guests looking for another way to enjoy our great SoCal weather.