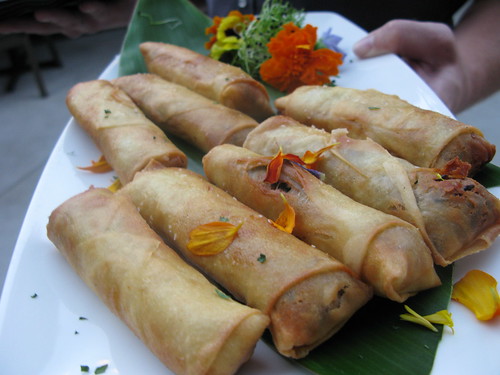 We attended the relaunch party of Tart, restaurant of Farmer’s Daughter Hotel across the street from The Grove in West Hollywood, earlier this week where we were invited to sample the redone menu of new executive chef Lauren Kyles, formerly of Hollywood’s The Green Door. We had arrived at the party starving for dinner but fried green tomatoes, crab 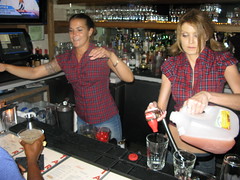 We’re not familiar with the old menu but what we tried during this event was pretty durn good. They even gave a “demonstration” of the “off-the-menu” cowboy steak which is grilled and then smoked in alfalfa hay. It was oh-so tender and perfectly spiced! Unfortunately we were still so full from the constant stream of passed appetizers that we couldn’t exactly bring ourselves to take more than a couple samples of the steak.

Turns out Tart even has a full bar and a specialty cocktail list. This night, three cocktails were featured: Southern Mojito made with Southern Comfort (a special for the night and not on the menu), lemonberry tartini and raspberry tartini. Normally these run $12. Looking at the drink menu, though, we’d be inclined to come back to try the Gentleman’s 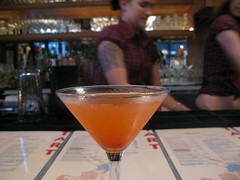 Margarita ($12) made of Gentleman Jack whiskey and lime juice. Most everything else on the list is the typical flavored-vodka-with-juice variety. We also asked for a Manhattan. They don’t have rye at the bar but the Wild Turkey we opted for made the cocktail nice and dry.

The bar area consists of only the bar with bar stools. The rest of the room, now with a huge glass window to allow for more light and to be more eye-catching on busy Fairfax Avenue, is restaurant seating. There is also an outdoor patio with stringed lights but that is restaurant seating as well. Just as well the restaurant/bar closes at 11pm.

Apparently last year there was some dispute between the Farmer’s Daughter and its surrounding neighbors when the neighbors didn’t take too kindly to the restaurant’s bid to become a happening nightspot with DJs and events. Now the restaurant only plays music indoors and if there is a dj, the volume is down low. 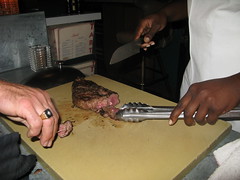 As for reviews that Tart is suffering from an identity crisis and inconsistent food/service, we spoke briefly with owner Pete Picataggio who said that he doesn’t pay too much mind to reviews, i.e. on Yelp and Trip Advisor, unless constructive criticism is offered. In which case he will consider suggestions and even write the reviewers back.

If anything, Tart is a fine place for the hotel’s guests to chill if they don’t want to venture across the street to Farmer’s Market and the Grove for eats and cocktails. But we wonder if it’ll still be provocative enough to Fairfax passers-by or those deciding where to have a satisfying breakfast, lunch or dinner. Prices aren’t so casual, ranging from $5.95-$13.95 for breakfast and brunch, $10.95-$14.95 for lunch and $12.95-$29.95 for dinner.

More pictures of the re(launch) party including a tour of the Farmer’s Daughter Hotel.