When I first heard about Upper Manhattan Lounge in Manhattan Beach, I had to check it out. Apparently, they have a long martini list. Sure it’s not a list with anything really intriguing on it (just one Manhattan cocktail) but it IS something unusual for MB. The lounge opened up this past July but I wasn’t able to get there til just this Friday. Hey, MB is FAR! Farther than downtown is from me. In any case, I convinced my buddy Mikey to meet me there since he lives in Rancho Palos Verdes.

There’s a cabaret show on most nights featuring some of the dancers from Forty Deuce, the shuttered burlesque club on Melrose, And we were meeting at 7pm so would get there in plenty of time to enjoy the peace and quiet until the big show. Unfortunately, getting there that early isn’t really all that worth it. Free parking at the meters doesn’t kick in til 8pm and it’s not like the bar features drink specials or a happy hour bar menu. Blah. 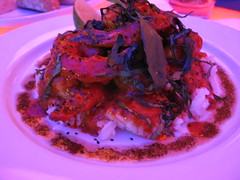 vantage point when the show started. Our bartender du noir was Brad. He used to work at Forty Deuce as well and apparently had just gotten back from a long vacation as he would reiterate every time we asked him a question about the lounge. “Do you guys have a special bar menu or just this dinner menu?” “I’m not sure, I just got back….” “Do you have any other specialty cocktails with whiskey in it?” “I don’t know I just got back…” Hrm. At least he was really nice and very entertaining.

In any case, no they don’t have a bar menu, but rather this dinner menu with those dratted small plates — so small, so expensive. The menu was divided into cold and hot plates. We settled on the bread and dip plate ($10) and the Thai Red Curry Shrimp plate ($16). The former was so not worth the ten-spot. It’s just pita bread and “artisan” bread, hummus, olive oil (?), and tapenade. The shrimp plate was yummy though. Not $16 yummy but spicy and saucy. 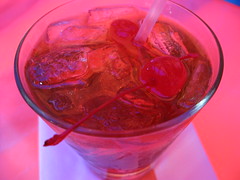 After perusing the cocktails for several minutes I defaulted to the Upper Manhattan cocktail ($14) — Makers, Grand Marnier, Sweet Vermouth and bitters. It says that it’s served with a brandy-marinated maraschino cherry but I didn’t test that point. Blech, maraschino cherries.

Mikey, however, took awhile deciding. He’s usually just a Jack and Coke guy but felt pressured to get something different so I could blog about it. After much haranguing from me and Brad, he finally settled on the Raspberry Mojito ($12) — mint, limes and raspberries muddled and topped with Bacardi “Razz” Rum, soda water and some cherry syrup.

“How do you like it?” Brad asked. “It reminds me of childhood,” Mikey replied. “It tastes like cough medicine.” I tasted it as well and agreed that the mix of the mint and raspberry lent it a medicinal flavor. Not good. I could tell Mikey didn’t like it as he nursed it oh-so slowly. 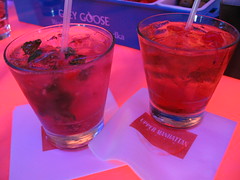 While Mikey and I sat sipping our drinks we checked out the scenery. Lots of colored lights, TVs and cougars. Yes, the crowd here, at least before 10pm, was old. OK, they’re probably only five years older than me but it’s definitely an older crowd than I usually run with.

Mikey explained to me that this is the demographics for Manhattan Beach — middle-age and rich. So I guess I can’t say the women were cougars because it’s not like there were young men here to prey on. Rather, there were men their age. But the women did like to show off their goods with their bleached hair, fake boobs and 20-something fashions.

Much to my dismay, the show didn’t start until 10:30 and at this point I was done. Even the chocolate lava cake ($8) we ordered didn’t make me want to 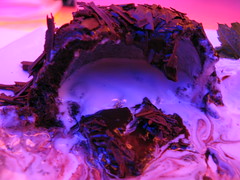 stay longer. Mike, the owner, stopped by and because he felt bad for our having to wait, he bought us a drink, well, me a drink. I asked him to order what he thought was the best drink on the list.

Instead he ordered me something called a V Martini. I’m not sure what was in it but it arrived all pink with fresh raspberries on a spear. I asked him why that one and he explained that it was “popular with the ladies.” After I sipped it I couldn’t understand why that would be the case. I couldn’t even finish it. I asked Mike what he usually drinks and he pointed to the stuffed martini with the hand-stuffed blue cheese olive. “I wish you ordered that for me instead,” I muttered. I know, I’m an ingrate. But seriously, it wasn’t drinkable. Mikey didn’t want it either and he drinks anything.

So FINALLY the show started. The jazz trio from Forty Deuce started things up and then dancer Lisa was the first one to give a little tease to the audience. Then my fave from Forty Deuce, Carolina, hit the stage all a-shimmy with her shiny fringed bikini. She did her famous booty shake. That girl dances so fast! She’s a joy to watch. 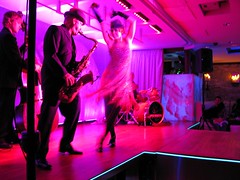 I wish I was able to get a shot of her but at this point the lounge filled up with people even standing in front of the service station, blocking me. Bastards. I did get up for Lisa, though, and got some shots of her flirting with the audience. The performances were soo short, though, because before we knew it, they were over and we had to wait an hour for the next one. Ferget that! At least we didn’t pay cover which is $10 after 10pm.

If you want to check out the show, I’d suggest getting there at 9. That way you can just park in the garage north of the lounge and you won’t have to pay a cover. Also, maybe steer clear of the specialty cocktails and stick to your standard fave. It may be cheaper and at least you’ll like what you get.

And yes, there IS a dress code of no sandals and no shorts; collared shirts and designer tees allowed. Weird thing, though, is that I didn’t see a bouncer at the door. Just the hostess. I wonder if she’s expected to enforce the code?