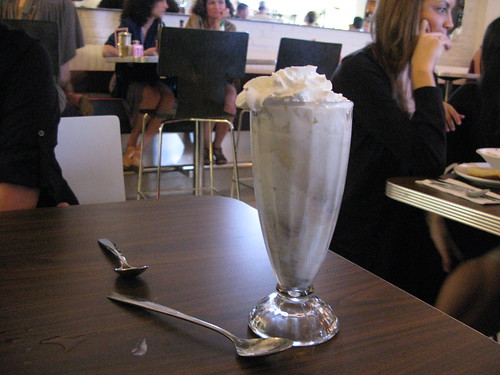 Usually when I hear about a new place and I hear about it from a bunch of the newsletters I subscribe to, I like to stay away from the newly crowned hot spot until things have dined down a bit (I’m still waiting for Osteria Mozza to mellow out!). Such was the case with 24-hour diner Kitchen 24 on the Cahuenga Corridor in Hollywood. It opened in June and The Rundown said, “It’s like walking into an Apple store that’s been converted into a diner lit by welded forks and spoons” and that “breakfast and lunch are served 24-7, and dinner is served until 2a.” Thrillist lauded its “full bar operating all-hours but 2-6am, when the law won’t allow alcohol.” And Daily Candy said that I should “save room for individual pies served in cast-iron fry pans.” 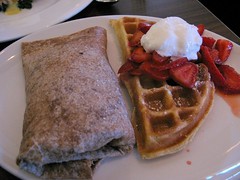 But what really motivated me to finally check out the place last night was the talk of cocktail shakes! I perused the restaurant’s online menu in search of this delicacy I’ve been craving since 8 oz. said they were thinking of adding some to their own menu. But then something called a Root Beer Float Martini ($10) caught my eye. This baby is made of Three Olives Root Beer vodka, Creme de Cacao and a scoop of vanilla ice cream served in a martini glass. Duuude! Now, I’m usually not a fan of flavored vodka but that sounds awesome and ingenious!

Unfortunately, after battling crosstown traffic for an hour and driving around for 20 minutes looking for parking, I arrived at the restaurant only to discover that they are in fact out of that root beer-flavored vodka. Booooo! The waitress was soo nice about it though and seemed genuinely sorry. Ah well, instead I ordered The Willie Nelson cocktail ($9) as an “aperitif” while I waited for my order of the Bartender’s Banquet breakfast ($9.50) dish of half a waffle with strawberries and a scramble of bacon, onions, eggs, sprouts, salsa and sour cream.

The Willie Nelson is the only whiskey drink on the two-page cocktail menu, which mostly consists of flavored vodka and rum drinks. Ol’ Willie is made with Old Whiskey River Bourbon, Amaretto, lemon juice and gingerale. I guessed it would be something light and sweet and you gotta love bourbon. I was a bit 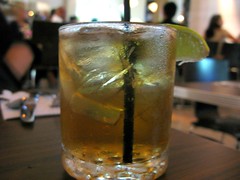 disappointed, however, that the cocktail showed up in an old-fashioned glass as I figured a restaurant would make a drink like this really watered down with a ton of ice and lots of gingerale. And so it would have been perfect if this was served in a tumbler or tall glass.

The thing is, it did come with a lot of ice and I could taste that gingerale but after I got halfway through the drink I felt buzzzzed. Of course, this could just be due to the fact that I was drinking this on an empty stomach. In any case it was a tasty little drink. That bourbon sneaks up on you.

It’ll have to be my favorite cocktail here. That is until I try that root beer float martini and that Dark N’ Stormy made with Bundaberg Ginger Beer and the Ginger & Mary Ann Mojito made with Domaine de Canton Ginger & Rum.

So while I was enjoying my evening breakfast — which I loved btw, sweet strawberries! — my friend Mei-Mei was digging into her order of the Hash Brown Salmon Florentine ($14.25). I almost ordered this myself as I LOVE salmon and hash browns. And this beauty was made with hash brown-crusted salmon topped with a 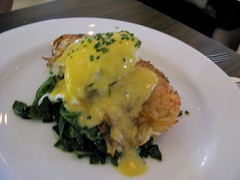 poached egg and served on sauteed spinach with hollandaise sauce. M2 gave me a bit of it and…mmmmm! What a great combination of tender salmon and crunchy hash browns. But M2 said she was a bit disappointed that the hash browns didn’t really cover the whole salmon filet, but rather its edges. Yeah, I can see how that would be a bummer. In any case, next time I come here THAT’s what I’m getting.

If you’re a cheapskate like me, you’ll probably be attracted to the breakfast and lunch dishes as most are under $10 while a majority of the dinner entrees are $10 and up — i.e. $11.95 turkey pot pie and $15.95 grilled salmon.

For dessert I ordered the Adult Swim cocktail shake ($10). Yup! THERE it is. There are only two on the dessert menu and they’re only served from 6am to 2am. This delectable concoction arrives looking very much like an innocent milkshake in a malt glass and topped with whipped cream. But when you take a sip of it you realize this is something you’ll want the kiddies to steer clear of as it is made of Absolut Vanilla vodka, Baileys Mint chocolate and that scoop of vanilla ice cream. I had M2, who’s not a fan of the taste of alcohol, take a sip of it 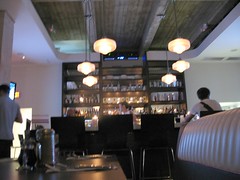 and afterward she wrinkled her nose, shoved the glass away and waved her hand at it as if to say “No, no, no!” And it is some strong sh*t! I gently sipped it through my straw and then looked at the tall glass, almost bemoaning the fact that I’d have to finish it on my own. “Almost” I said.

Oh yeah. I finished it. This isn’t as desserty or sweet as you’d think it is, though. It’s not merely a vanilla shake with a hint of alcohol. It’s like drinking a White Russian in shake form. I loved it though. Next time I want to try that other dessert cocktail, the Soda Jerk ($10) — a scoop of vanilla ice cream floating on a shot of Amaretto, dark Creme de Cacao in a malt glass.

Mei-Mei ordered a skillet apple pie a la mode for her dessert. We were amazed by the large portion considering it was only $5. Of course I couldn’t help M2 finish it but she did a good job of polishing off the flakey crust. She left a lot of the apples and ice cream behind. Turned out she was still too full from her salmon. It was sad seeing most of that yummy-looking pie go uneaten and it’s not something you can take home in a doggy bag. 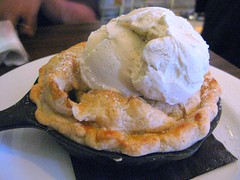 I will be back though and when I do I’m going to sit at the bar. When we first walked in, they immediately sat us at a low table up against the hostess stand. It was only when we put our orders in that I realized there was a great bar area at the back of the restaurant, with tall barstools offering a great vantage point of the room and a better view of the street so you can watch all the Hollywood freaks pass by. Darn. Also it was better lit; better for taking pictures.