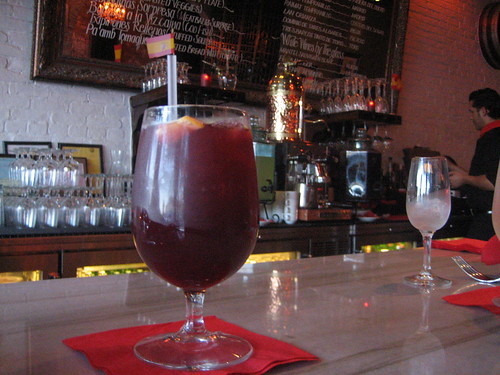 I’m not the biggest fan of tapas. They’re small plates with big prices and goodness knows I’d rather have more food than that. But my friend Shelley told me about a happy hour at Tinto Tapas in the Fairfax area that has $5 tapas on Mondays from 5 to 10:30pm. She had gone there after my blogiversary at Bar Lubitsch Tuesday night and they happened to be in the middle of Paella night where, for $45, you can get a plate of paella for two (regularly $38) and a pitcher of sangria (regularly $25).

We got there around 7:30pm and found a couple of seats right at the bar and in front of a kerchief-wearing Antonio Banderas lookalike/bartender — Shelley has a little crush. When he came over and handed us menus for the happy hour (only food specials, no drink specials here), Shelley started going on and on about how she was here just last week and how she’d been to Barcelona before and ohh, was he from Barcelona… It was funny. Heh. He listened politely and said he remembered her from Tuesday. Good memory! He was very nice and smoothly moving from one patron to another at the bar to make sure we were all taken care of. 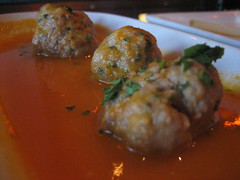 For tapas we decided on the dates stuffed with blue cheese and wrapped in bacon, a plate of Serrano ham and Manchego cheese, mushrooms sautéed with garlic, white wine and parsley, and beef-pork meatballs in an onion, leek, carrot and garlic sauce. Each was $5 and good enough for two people to share. Everything was yummy!

My fave had to be the dates because I LOVED that combination of sweet and salty as well as blue cheese, mmmm! Shelley kept saying how the plate of Serrano ham and Manchego cheese reminded her of the time she was in Spain but I was unimpressed. It’s just ham and cheese, albeit GOOD ham and cheese but I can make that plate at home. The meatballs (four on this plate) were really tender and the sauce was so good that we couldn’t help but mop it up clean with our bread. The garlicky mushrooms were OK. I mean, you can’t go wrong with garlic but if I had a choice I would have picked another order of the dates over the mushrooms.

There’s a cocktail menu (drinks are $7 each) but it’s filled with things like strawberry margaritas, pina coladas and something called Café Madrid — iced espresso and Irish cream topped with chocolate sprinkles. So I ordered up a 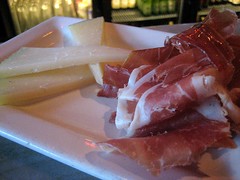 glass of red sangria ($6). This tasted watered down as if it sat too long and its ice melted so I didn’t taste that yummy full body richness I’d get with a good sangria. Fortunately it still did its job of getting me a little buzzed. Shelley had ordered the white sangria and said that she, too, felt buzzed after only drinking a quarter of it. BTW, hers was very light and summery.

When we polished off the tapas we considered ordering one more but thought it best to wait a moment to see if we were really hungry. Turns out we were full but still had room to try the flan. Unfortunately, this was just so-so. It was pretty dry for flan and not all that creamy. I wish it had more caramel sauce on it but at least the raspberry sauce offered some flavor.

At around 8:30 the bar was full with some of the tables in the dining room taken up. Tinto has been here for almost a year now and when it first opened reviewers had said it was always packed. Fortunately that wasn’t the case at the time we went; it was a Monday evening after all.

Would I come back here? Eh. I was thinking of taking my other Hispanophiliac friend. I know for a fact that she’ll get all googly-eyed once she lays eyes on the faux Antonio. Oooh, and when she hears the way he says “Bar-tha-lona”? Melting! But in any case, the prices are decent, the staff is super friendly and it’s just down the street from Bar Lubitsch so that’s cool for après tapas cocktails.