Tell No One: Speakeasy Sundays at the Edison 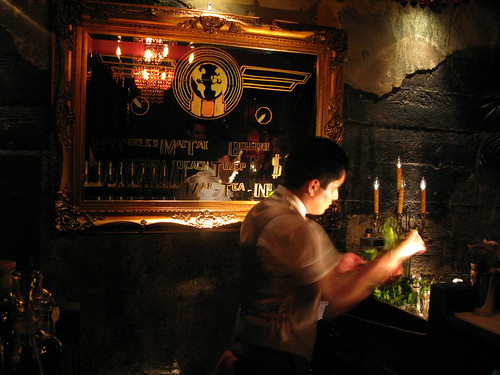 Hmm, I’m not sure I want to tell anyone about this but at the same time I feel obligated. Oh well, I’ll just tell you guys and hopefully you keep it on the QT. But last night I went to the Edison in Downtown L.A. for its new bar night called Speakeasy Sundays. And it was pretty awesome. Only the Radio Room is open while the rest of the bar is closed, leaving a very intimate space for cocktail fans — 125-person capacity to be exact — that can only be accessed through this narrow staircase a couple of doors down from the bar’s main entrance. And once the room hits capacity, they close the doors. So swank! And you don’t even have to pay a cover, or a membership fee for that matter. 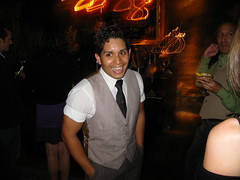 The event is the brainchild of the Edison’s own Marcos Tello and Aidan Demarest as a way to get the Los Angeles cocktail community together. Every week on this special night a different mixologist is featured along with their own brand of cocktail menu. That’s right, that means a fresh, new menu every week. So if you have a favorite cocktail one week, you’ll have to find a new one the next week. And not only that but you get several rockstar bartenders, the best in L.A., in the course of one night. Tonight’s cocktails were an Earl Grey cocktail with Earl Grey-infused gin, a Los Angeles Mai Tai (based on the original recipe that Trader Vic ripped off), a Bellini and a Georgia Peach Mint Julep ($14 each).

There’s a small bar located in the Radio Room with just space enough for the featured bartender. The supporting bartenders handle the drink orders from the servers at the main bar which is closed off and during the night they rotate so that each one has a turn in the Radio Room. This night we had Chris Ojeda of

Osteria Mozza starting us off, then Marcos himself and Michele Dozois from Comme Ca. 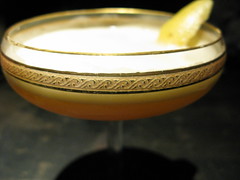 Once in the Radio Room, the featured bartender puts on a show for the patrons. They’ll tell you everything you want to know about the featured cocktails including their exact origin and history. Very impressive. The cocktails themselves are served in vintage barware purchased from The Bar Keeper store in Silver Lake. I almost wanted to order the drinks just based on the fancy glasses they came in. The Earl Grey cocktail arrived in this old-fashioned champagne glass that had real gold trim. “It reminds me of Indiana Jones,” my friend Esther said. Even the ice was fancy, hand-chipped (it took eight hours) by Michele, who also happens to be owner of La Glace, a gourmet ice company.

Later in the evening, there was live music. A beautiful chanteuse emerged from behind the red velvet curtains in a slinky red gown with gardenias in her hair reminiscent of Billie Holiday. She sang jazz standards, captivating the audience while she was backed by a pianist, saxophonist and guy playing an upright bass. For a second I felt like I was transported to a different time. Yes, live music acts will also be different every week. 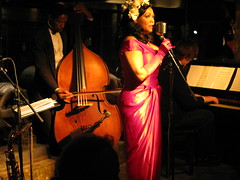 My friends and I noshed on a seafood platter as we watched the show. The seafood platter, along with the meat and cheese platter, cost a pretty penny, $40 to be exact, and it’s only good for two people, or one really hungry person. As it is, I split it with my two friends. It was tough having to share the yummy ceviche, mini lobster thermador and pesto crab. I let them fight amongst themselves for the tuna and prawns.

We had had the cheese platter ($32) earlier in the evening and that was pretty tasty, too, as it came with about five different gourmet cheeses as well as some grapes, dried fig bars and honey. However, we still found ourselves hungry at the end of the night, and wanted something more substanstial so we skipped out a little bit earlier than I would have liked to to go to Pete’s down the street for some mac and cheese.

But damn, this is a pretty special thing the Edison is doing. If you’re big into cocktails and only want them done from the best in Los Angeles, you get all of that in one place on this night. I’m definitely going to be a permanent fixture here every Sunday.

UPDATE (3/31/09): The Radio Room Speakeasy Night is now once a month with a $10 cover. Check the Edison’s calendar for more information.

More pics from the soft opening for Speakeasy Sundays.